On 26 September, Chinese hotpot chain Haidilao (HDL) shares debuted on the Hong Kong Exchange and climbed as much 10% on its first trading day. The initial public offering (IPO) raised nearly US$1 billion for the company.

To be honest, I’ve patronised HDL quite often since it entered Singapore many years ago and their truly exceptional service level is one of the reasons behind my repeated visits. You could say that I am a fan of HDL, but as an investor I have to remain unbiased and objective when analysing a company.

We received several emails from our readers asking what we think about HDL’s listing, so I decided to spend an entire day reading the 520-page (!) IPO prospectus to learn more and gain a better understanding of the company. So if you’re looking at the Haidilao with interest, here are six things to know before you invest:

1. Leader in the hot pot restaurant market in China

According to an independent market research report by Frost & Sullivan presented in the IPO prospectus, the hot pot restaurant industry is a fragmented and highly competitive market. The top five players in the industry represent just 5.5% of the total market share. HDL has 2.2% market share — which is more than double the second largest player who has 0.9% market share.

The founders of HDL set up Yihai Group, Shuhai Group, Shuyun Dongfang, and Weihai Consulting as separate entities to provide goods and services to HDL. Transactions from these related parties accounted for 51.2% of total purchases in 1H 2018. The number seems to be on a decreasing trend as seen below. 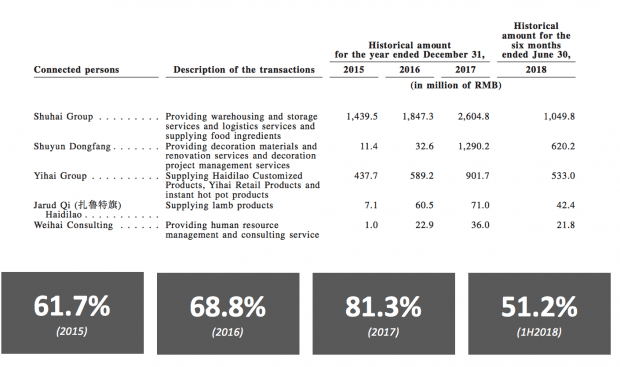 3. The listco does not own the Haidilao trademark

Despite the licence being perpetual and exclusive, investors still must be wary of the possibility that the it could be revoked at any time, however unlikely it may be.

4. 85% of IPO proceeds raised to be used for growth

One thing I usually scrutinise is what the management plans to do with the IPO money that’s raised. I prefer the funds to be used for business growth rather than paying off debt, simply because growth is a key consideration if you are going to invest in an IPO stock.

In HDL’s case, it plans to use 60% of its IPO proceeds to finance the expansion of new restaurants from 2018 to 2020. Twenty percent will be used for used for development of new technology and 5% for working capital. The remaining 15% will be used to repay bank loans.

HDL has 363 restaurants worldwide — 332 in China and 31 in the rest of the world. Here are the revenue growth rates across HDL’s geographic segments in 1H 2018:

Seeing that Singapore already has 10 restaurants despite being a relatively small market, we could reasonably expect more growth in outlets in other countries.

HDL’s FY2017 reported earnings is RMB1,194.3 million and its market capitalisation is HK$94.3 billion. Therefore, its P/E ratio works out to 69.2. But if you refer to the financial statements, you’ll notice exceptional gains not related to HDL’s operating business. 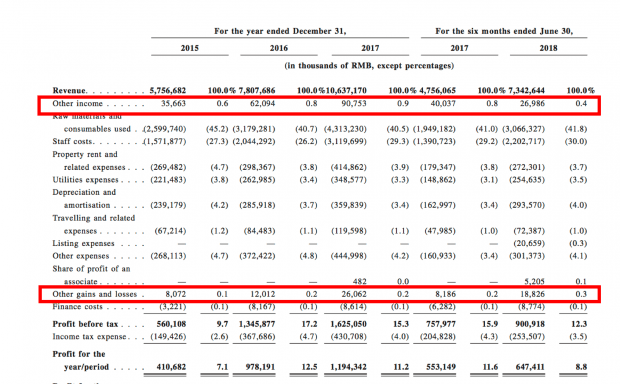 As a conservative investor, I like to remove any exceptional gains. Therefore, after doing so, HDL’s adjusted earnings are RMB1,077.4 million, which gives us an adjusted P/E ratio of 76.7 (this figure is slightly lower now as HDL’s share price has fallen around 6% since its IPO). In comparison, a tech company like Facebook currently has a P/E ratio of around 24.

A sky-high P/E ratio may be justifiable if growth rates are similarly high, but HDL’s adjusted 1H 2018 revenue and earnings growth are only 54.4% and 19.2% respectively. At this price, HDL seems more eye-watering than mouth-watering.