It’s been a chaotic few days for Hong Kong as hundreds and thousands of its citizens marched on the streets to protest Beijing’s decision to limit Hong Kong voters the ability to elect their head of government in 2017.

Voters will still be allowed to vote but only from a list of three pre-approved candidates selected by Beijing. Hong Kong citizens feel the move would limit “true” democracy and have sparked a protest movement called Occupy Central.

Tear gas and pepper spray has been used in a bid to control the protests and Beijing has already issued a stern warning to the protests, but it remains to be seen what the response would be if the demonstrations escalate.

The unrest has obviously affected business in Hong Kong and spooked investors, pushing the Hang Seng index (HSI) lower. As of 30 Sep 2014, the HSI’s P/E ratio is 10.80, some way below its historical average of 14. 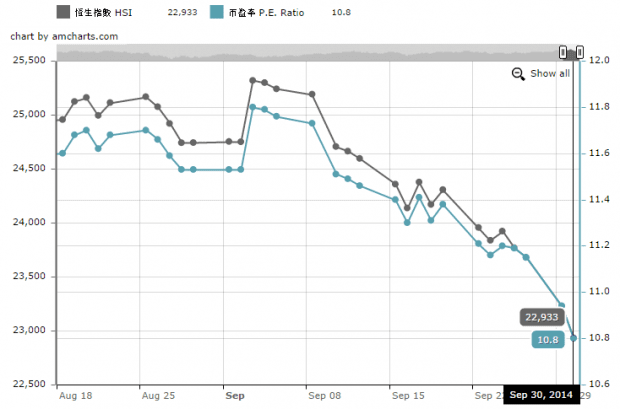 Compared to the major indices around the world, the HSI also looks relatively cheap:

While it wouldn’t be the wisest to jump in now just because the Hang Seng looks like a bargain, with all the uncertainty surrounding the aftermath of the protests and Beijing’s response, the Hong Kong market could continue to stay depressed throwing up some undervalued opportunities for investors there.