China surprised the world twice this month by devaluing its currency in successive days. Without prior warning, China’s central bank, the People’s Bank of China (PBOC) cut the Chinese Renminbi Yuan’s (CNY) daily reference rate by 1.9% on 11 August 2015. This is the largest move since China introduced the current dual band currency system in January 1994.

Two consecutive days of devaluation caught the world’s attention as global equity prices slumped as a result. We are likely to see future devaluation in the future as China aims to regain its export competitiveness. In this article, I would like to translate the impact of such a policy to people living in Singapore.

The good news is that while China has an influential central bank, we have one in Singapore too. While our central bank may not move international markets as strongly as the PBOC, the Monetary Authority of Singapore (MAS) has the tools at its disposal to cancel out the effects of the PBOC’s devaluation on the SGD. With our strong foreign reserve position, Singapore is the master of its own destiny as far as the SGD is concerned.

The bad news is that there are very real trade-offs to consider before the MAS makes its next move. On one hand, a weaker SGD would strengthen our export competitiveness especially in light of China’s devaluation and our weak economic results last quarter. However a weaker SGD would lead to capital outflows, tightening the money supply and cause interest rates to rise. This is a real issue given that we are a nation of homeowners and higher interest rates will affect a substantial proportion of our population who have floating mortgages.

How the MAS Controls the Value of the SGD

In Singapore, the MAS controls monetary policy in Singapore through the relative value of the Singapore dollar (SGD). The SGD trades within the Nominal Effective Exchange Rate (NEER). Recently on 14 April 2015, the MAS moved to ease monetary policy by reducing the slope of the NEER in response to the weak economic conditions in Singapore. 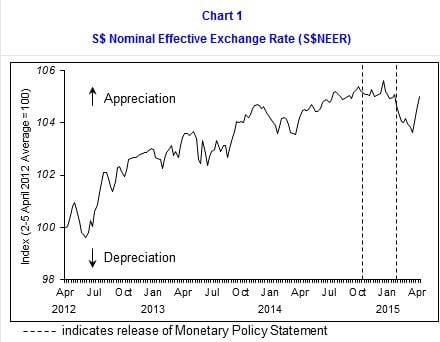 In more layman terms, the MAS sold the SGD in the open market to reduce the value of the SGD against the currencies of our major trading partners. The MAS has enough official reserves to move the SGD in any direction. According to the latest MAS release, Singapore has official reserves of S$342,287.1 million or US$250,116.4 million as of July 2015 — accumulated from a long history of trade surpluses and astute investment gains.

While there are highs and lows in our balance of trade (difference between exports and imports), it is clear that for the past ten years, Singapore has exported more than we import. This difference ended up in our official reserves which allows the MAS to 1) strengthen the SGD by selling foreign currencies and buying the SGD or 2) printing and selling the SGD to buy foreign currencies to weaken the SGD.

It should be noted at this point that the MAS does not directly control local interest rates (unlike the U.S. Fed) since it has chosen to conduct monetary policy through exchange rates control. So while the MAS has the tools at its disposal to either strengthen or weaken the SGD, it has to play this chess move very carefully. It has to strike a balance between the competitiveness of the economy and the interest rate in Singapore. Once the decision has been made, it will have long-term repercussions on the Singapore economy. There is no room for mistake and no reset button in real life.

The Case for a Weaker SGD

Let us first consider the case for a weaker SGD as all other major economies in the world are devaluing their currencies with the notable exception of the U.S. and the UK. I will start with Singapore’s recent economic performance before branching out to external conditions (China’s devaluation being one of them) that call for a weaker SGD.

As seen from our consistent trade surplus, Singapore is an export nation and a relatively stronger SGD makes our exports more expensive and less attractive — dragging down our economy. The Ministry of Trade and Industry (MTI) released these economic figures and cut Singapore’s growth forecast from 2.0-4.0% to 2.0-2.5% for the year of 2015 as per its latest release on 11 August 2015. I have written about the challenges facing the Singapore’s economy and detailed the problems facing our manufacturing sector and the effects of the oil plunge there.

Besides GDP, here are other important economic indicators: 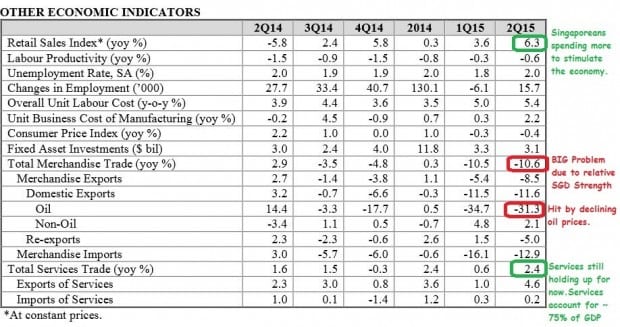 Let’s look at Singapore’s competitiveness from the perspective of currency strength and weakness. The X-rates charts below show the performance of the SGD against each foreign currency. When the chart is going down, it means that the SGD appreciated because it takes less SGD to exchange for each unit of foreign currency and vice versa. 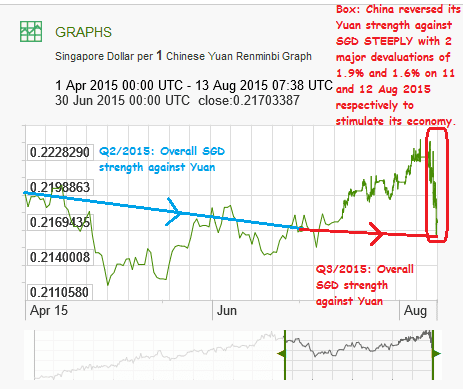 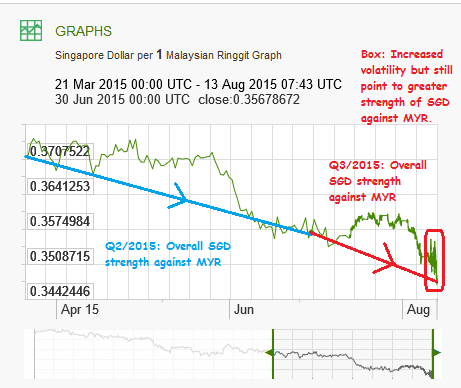 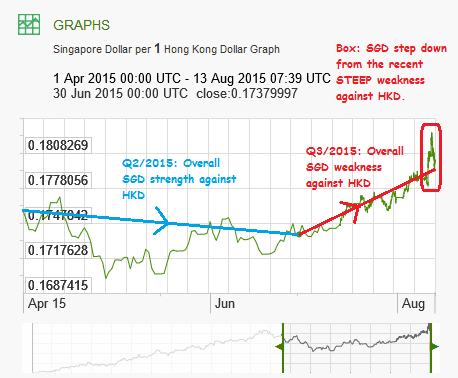 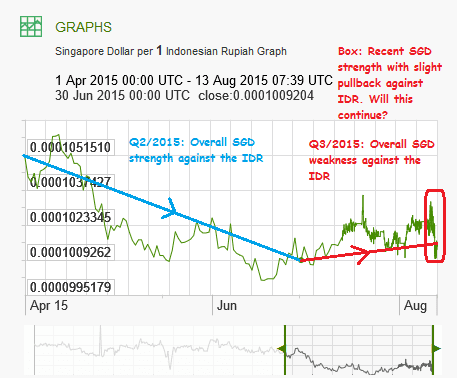 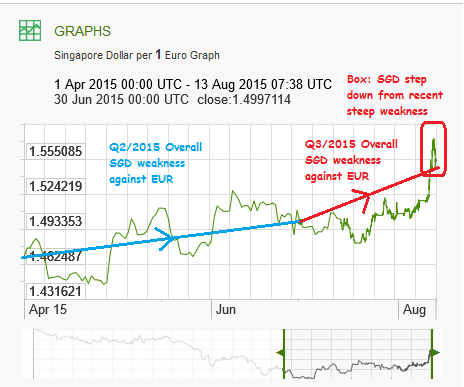 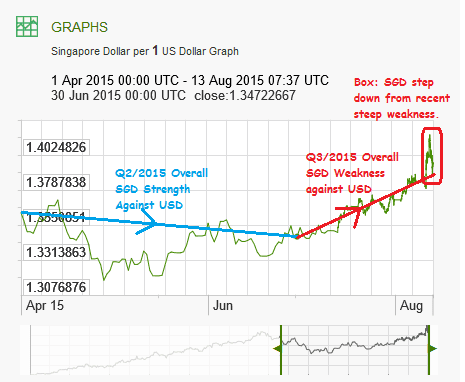 If you look at exchange rate charts of our top six export economies, it is clear why Singapore struggled in Q2/2015. The SGD actually strengthened overall against the CNY, MYR, HKD, IDR and USD with the lone exception of the EUR. In other words, Singapore only managed to maintain its export competitiveness against Europe in the second quarter.

The SGD strengthened against the USD in the second quarter, then weakened moving into the third quarter — giving a slight boost to our economy. However this is only our 6th largest exporter. For China, which is our top exporter, the PBOC’s devaluation of the yuan has erased MAS efforts to gain export competitiveness in the third quarter. Now China has the upper hand.

As for our second largest export market, Malaysia, the MYR weakened on the back of political instability over the 1MDB scandal which involves the Prime Minister Najib Razak. This MYR weakness has carried into the current third quarter and it seems that the MAS cannot depreciate the SGD enough to catch up with the Ringgit.

For Indonesia, there were some weak political appointments which resulted in poor economic results and the corresponding IDR weakness. Indonesian President Joko Widodo responded with a Cabinet reshuffle recently on 12 August 2015. The IDR might strengthen against the SGD but that remains to be seen.

While the easy way towards growth would be for the MAS to depreciate the SGD against ALL six currencies, it would also bring its own set of problems. Our import costs would rise substantially and spark off higher inflation and, in turn, higher interest rates in Singapore.

The Case for a Stronger SGD

When the SGD weakened against the USD when China devalued its currency, it also made it less attractive to international investors. This is happening at the same time when the US Federal Reserve is poised to rise interest rates. The Fed vice-chair Stanley Fischer made some bullish comments during an interview with Bloomberg TV recently on 10 August 2015. 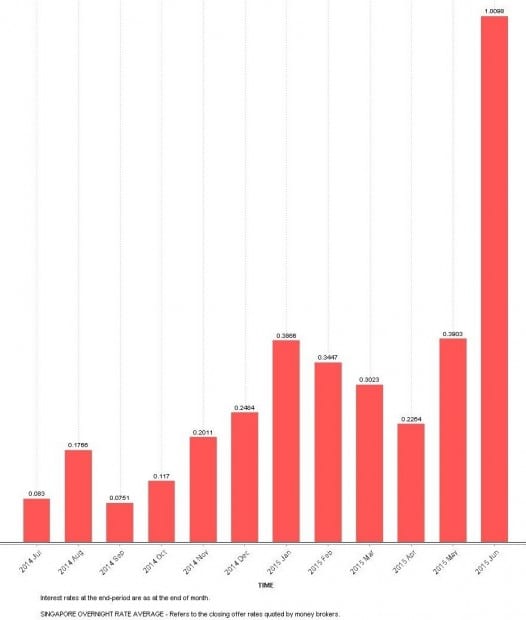 As for the 3-month SIBOR, it is now at 0.9345% as of 12 August 2015 according to the Association of Banks in Singapore (ABS). According to The Business Times, the SIBOR rose by 6.3% when China devalued its currency which resulted in the SGD’s weakness against major currencies especially the USD.

I refer to one of my previous articles and noted that we started the year with the 3-month SIBOR at 0.44%. This represents a 112% jump in eight months. This means that if the MAS were to allow the SGD to weaken further along with the CNY devaluation, Singaporean homeowners will face higher interest rates and mortgage payments.

The MAS has moved to moderate the SGD weakness in recent days and this is probably to mitigate the impact of rising interest rates. Indeed the Singapore government is in a tight spot. It has to choose between stimulating the economy and moderating the rise of local interest rates. Can we have our cake and eat it too?

Given that we are in election season, it is likely that the MAS would prevent the SGD from weakening too rapidly to prevent a mortgage bill shock for Singaporeans. However after the election, we might see a more rapid weakening of the SGD to strengthen our economy. However that is not an easy task, as other countries might not want to lose out to Singapore. As a caveat, this is just my opinion and the MAS might have other factors to consider.

An important side note is that the PBOC devaluation has effectively cancelled out the net interest margin advantage which our local banks had as interest rates rise. This is because they have large presence in China and the lower CNY cuts into their earnings.

Hence while the PBOC devaluation is major news as China is our top export market, it is just part of the many factors affecting the strength of the SGD. The MAS can easily undo the PBOC move by weakening the SGD but it is now constrained by interest rate factors. That is all for today and I hope that I have put the PBOC devaluation in perspective for you in Singapore.