In Part 1 of this article, I shared that fallen angels are one of the best ways for investors to make exceptional returns – if you can spot them. But even if you do, you need to make sure that the fallen angel is one that is able to re-emerge from its unfortunate event and recover to its former heights, and not one that is headed for bankruptcy. It is a very thin line between the two and you need to analyse the company and the situation properly.

I shared that you need to look at three things when analysing a fallen angel: the event, the company’s management (and how they’re handing the event) and the company’s financials. The company’s financials are the final key in determining if they survive the event. Financials provide hard figures and numbers that will tell you how financially sound a company is and whether they have what it takes to ride the storm and return to their former peak.

I picked OSIM as a case study and we covered the event that caused their “downfall” and CEO Ron Sim’s handling of that Brookstone disaster in Part 1. In Part 2 here, I will breakdown OSIM’s financials before the disaster hit in 2008.

When we look at OSIM’s financial track record, we want to know whether the company was already profitable before the Brookstone episode. If OSIM was already doing extremely well before that event, they stand a much higher chance of recovering. If they were already doing poorly and had a weak financial footing, then it obviously wouldn’t look so good moving forward. So let’s have a look! 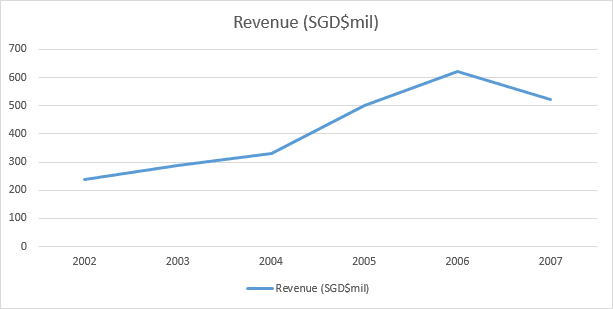 OSIM’s revenue from 2002-2006 already showed a growing uptrend; OSIM was already a very profitable and successful company. There was a slight tail-off in revenue in 2007 due to the early shoots of the subprime crisis starting to emerge.

OSIM’s net profit (excluding exceptional items) hovered between $15-30 million a year except for 2002 when they made $400,000 in net profit. As you can see, OSIM had been a very profitable company for many years before the Brookstone episode.

OSIM had also been making at least over $20 million in operating cash flow from 2002-2007. Not only is OSIM profitable, this means they also actually generate more cash inflows than outflows from their business operations year after year.

The only concern was that OSIM’s total debt had always been higher than its cash position. This means if OSIM ever needed to fulfil its debt obligations immediately (unlikely, but you never know), it didn’t have enough cash to service its debts. When that happens and unless the company can raise extra cash, it will go bankrupt.

OSIM’s debt vs cash wasn’t all too favourable but remember that OSIM is a huge cash cow business. If you looked at OSIM’s debt to cash flow ratio instead, the company always hovered beneath 3.0. This means that OSIM is able to service its entire debt in three years with their cash flow. For me, a ratio of 3.0 and below is a good sign. So even though OSIM’s debt levels were higher than its cash, its positive cash flow generation more than made up for it.

So from 2002-2007 OSIM’s financials already looked great prior to its Brookstone episode in 2008. But coupled with the impending Great Recession and the size of the $112.5 million impairment loss, would OSIM, even with is solid financial track record, be able to stomach a blow of that magnitude? Would it be able to return to its former glory or forever be financially handicapped by its one American acquisition mistake?

Look out for the conclusion to this case study in Part 3!