The SPDR S&P 500 ETF (NYSE: SPY) is the oldest and most successful ETF in the world and tracks 500 of the most successful companies in the United States across various sectors.

In my opinion, SPY is the most cost-effective method to gain exposure and ride on the economic growth of the U.S. For those of us who are bullish on the U.S. in general but don’t know which particular U.S. stock to buy, then going with the SPY might be your best choice.

The table below provides the basic characteristics of SPY:

SPY is highly established and liquid with $168 billion in assets and 149 million shares exchanged on average over three months. State Street Global Advisors is the institution behind the SPY and they are the second largest asset manager in the world with US$2.4 trillion in assets under management — behind only BlackRock.

Here are the top ten holdings for the SPY:

The top ten holdings of the SPY would give you a general idea of the composition of SPY. It contains technology companies like Apple and Microsoft, energy companies like Exxon Mobil, and pharmaceutical company like Pfizer. It is a highly diversified ETF; the top holding (Apple) weighs less than 4% of the total fund and the top ten at only 16.94%. This means that if any company were to get into trouble and see its stock price fall, it would not affect the SPY significantly.

Another great thing about the SPY is that it will always contain the top 500 companies in the U.S. The best way to illustrate this is like how football clubs are promoted to (and relegated from) the Premier League based on their performance.

Similarly, the index will only select the top 500 U.S. companies. If a company grows more and more successful, it will eventually replace another company’s spot in the S&P 500 when it overtakes it – so you’re always invested in the best 500 companies. In this sense, the index is emotionless and very efficient.

Here’s the growth of the SPY over the last ten years:

The chart shows that the SPY closely follows the return of the index which it tracks: the S&P 500. If you invested $10,000 in the SPY ten years ago, it would be worth approximately $16,800 today (a 68% return) – even when taking into account the Global Financial Crisis of 2008/09. Of course, if you were one of the more savvy investors and bought the SPY in 2009 and held it to today, your return would be even higher – a 180% return.

Relationship between U.S. GDP and the S&P 500

I mentioned that a growing American economy means a rising S&P 500 as well and you might be wondering about the correlation: 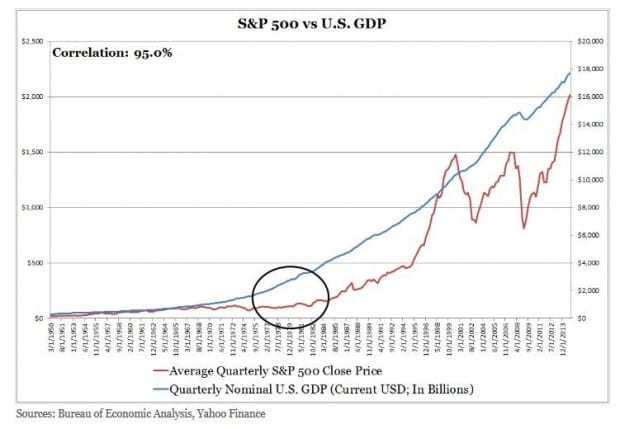 As you can see from the chart above, there is a positive correlation between the U.S. economy and the S&P 500.

Why is that so?

The reason is straightforward. When the US economy is strengthening, U.S. consumers spend more and it is very likely that they will spend their most of money with one of the top 500 U.S. companies. These companies grow more successful and their stock prices rise which in turn brings the entire index upward.

So the question is: How is the U.S. economy doing right now and will it continue to grow upwards for the next few years to come?

I look at this from four main areas: