The U.S. has reported two consecutive quarters of negative growth, and the Fed remains determined to raise interest rates further in its fight against inflation. Global recession seems imminent.

How can investors turn this challenge into an opportunity?

So, you’ve flipped open the newspapers, listened to the radio, or glanced through a video – and seen the big ‘R’ word (recession). A recession is a period of decline in economic activity, and the UK’s official definition is an economic contraction over at least two consecutive quarters. The World Bank has already signalled a recession warning, and banks like Goldman Sachs and JPMorgan have expressed caution. Morgan Stanley puts the probability of recession at 50%, whilst Fitch Ratings expects a recession in the second quarter of 2023. This nervousness has definitely translated to markets in 2022.

Equity markets have fallen precipitously in response to rising interest rates and deteriorating macroeconomic data. As of 31 October 2022, the U.S. market (S&P 500) is down 18.8% year to date, and the world equity market (MSCI All Country World Index) is down 20.8%. Bonds, which are supposed to be less volatile during selloffs, have not been spared either, due to rising those rising interest rates — the U.S. S&P 10-year treasury bond index is down 17.8% YTD, and global investment grade debt (Bloomberg Global Aggregate Bond Index) is down 20.4%. With both equities and bonds suffering a double whammy, the traditional 60 equity/40 bond portfolio has suffered.

The big question is how can investors position their portfolio during such times?

There are three ways to look at it:

Throughout this year’s selloff, cautious investors have looked to de-risk portfolios until markets show clearer signs of recovery. By reducing equity or bond allocations, portfolios are now holding a larger portion of cash. U.S. individual investors are currently holding 24.7% of the portfolio in cash, as of October 2022, equivalent to the midpoint of the Great Financial Crisis in 2008.

The narrative of ‘There Is No Alternative’ (TINA) to equities, which drove a decade long equity market bull run, is over. TINA has changed into TINAA (“There is Now An Alternative”). With central banks hiking rates to keep inflation at bay, alternatives now do exist. Investors who want to earn yields on their cash without incurring asset volatility now have opportunities in the form of fixed deposits and T-bills. Depending on the amount, and the bank, a three-month USD fixed deposit rate can now earn at least 3.0% p.a and that is going up. Closer to home, SGD denominated T-bills are now fetching a median yield of 3.44% for the most recent six-month T-bill.

One caveat is that by holding a sizeable amount of the portfolio in cash and cash equivalents, investors would be on the wrong side of the market when it rebounds. As market timing is an extremely difficult task, investors should set predetermined levels to enter into the market (for example when the S&P 500 reaches a specific value), or to add when a combination of technical and leading economic indicators both turn positive.

Whilst the markets grind choppily lower, actively managed, uncorrelated strategies have performed well, and will continue to be a source of returns during such periods. That’s what they are designed for. After years of outflows as a result of underwhelming performance, global macro, multi-strategy hedge funds and commodity trading advisors (CTAs) are having their day in the sun.

Over a three-year period, such alternatives have generated positive returns, while incurring half the risk (volatility). These strategies have a tight risk control limit which lowers the volatility and are meant to deliver returns in an all-weather scenario.

By investing a portion of your portfolio in such lower volatility strategies, investors could improve the return profile whilst minimizing overall losses. Note though, that the quid pro quo is that some of these asset classes are less liquid and have redemption periods ranging from monthly to quarterly.

Winston Churchill was credited with the saying ‘Never let a good crisis go to waste’, and as the world transitions into a different state – resource shortages, increased geopolitical tensions, deglobalization and, now, ‘bipolarization’, there are opportunities arising that investors can take advantage of.

Looking back further in previous recessionary cycles, the 1930s provides a glimpse whereby the starvation of natural resource capital in 1920-1929 preceded a boom in natural resource prices. From 1929 to 1937, oil stocks generated a return of 30% compared with the S&P 500 which had halved in value. When it broke even on 1947, oil stocks had tripled on a total return basis, and a similar trend for mining stocks. There were similar occurrences in 1969 and 1999 whereby natural resource capital spending had dropped drastically for a decade, only to lead to a boom in natural resource stocks over the next 10 years. An equally weighted portfolio of miners, oil companies, gold stocks and agriculture companies returned 500% from 1970 to 1990, and nearly 400% from 1999 and the Great Financial Crisis in 2008. In comparison, the S&P 500 returned 170% from 1970 to 1990, and only 20% from 1999 to 2008.

In today’s context, the 2010-2020 commodity bear market severely reduced capital spending, with spending in energy falling from US$320 billion per year to less than US$100 billion per year in 2022. Despite energy’s rally so far, energy and materials only comprise of only 8.3% of the S&P, compared to 20% in 2008. Couple that with geopolitical tensions, gas shortages, structural inflation (1970s, anyone?) and it helps to form a positive backdrop for natural resources.

Other interesting areas which seem to be taking shape are in bonds. As mentioned above ‘There Is Now An Alternative’, the increase in rates could mean that investors can now find high quality, short duration credit that are yielding at least 5-6%. In previous years, one would have to seek out longer duration, lower quality names to achieve a similar yield. That being said, the recovery in the bond market will take some time and it would primarily involve a pivot in central bank rate hikes and data showing inflation being kept under control.

The last area of opportunity to consider would be in REITs. In fearful markets, a broad selloff across global REITs have caused a blanket reset in valuations, whereby fundamentals are often overlooked. As of August 2023, the global REITs market (FTSE EPRA Nareit Developed Index) is trading at a 18.3% discount to NAV, whilst the private real estate market (Open End Diversified Core Equity (ODCE) Funds) had a significantly smaller impact.

Whilst past performance is not a guarantee or reliable indicator of future results, it could present an opportunistic scenario whereby negative sentiment have led to oversold areas.

The contrasting sayings of ‘a rising tide lifts all boats’, and ‘when the tide goes out, you see who is swimming naked’ meaningfully captures the past 10 years and the current regime we are in now. Tightening fiscal policy, geopolitical upheavals and inflation are aspects that should be of concern to investors. New paradigms require new lenses when it comes to viewing portfolio management and planning your financial journey. Recessions create difficult waters to navigate, but seeking out safe havens, reorienting strategies and capitalizing on present opportunities could be something to genuinely consider for your portfolio. 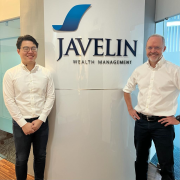 Steve is the founder and CEO of Javelin Wealth Management, which he set up in 2003. Javelin is a Singapore-based wealth management company that advises wealthy individuals and their families. Steve has lived in Singapore since the late 1980’s, and has previous experience as a broker and investment banker specialising in Asian equities. Wei Hern is an investment analyst at Javelin Wealth Management, he works with the team in managing multi-asset portfolios. He has a Masters of Science in Wealth Management from the Singapore Management University. His interests include collecting esoteric religious literature and deciphering hip hop lyrics.