Carl Celian Icahn is one of the most successful and famous hedge fund investors in the world. Forbes estimated his net worth to be US$21.2 billion as of 31 August 2015 at the age of 79 years old. The public image of Carl Icahn is that of a ruthless corporate raider in the 80s & 90s who subsequently “mellowed” into a feisty activist later in life. His investment vehicles are Icahn Capital Management and the publicly traded Icahn Enterprises.

Carl Icahn has a totally different investment style when compared to Warren Buffett. Icahn favours technology stocks (e.g. Apple) while Buffett prefers more traditional companies. Icahn is seen as a ruthless corporate raider while Buffett has a benign public image as the Sage of Omaha. Heaps of money to be made in both the gentle and aggressive investment styles as the #2 and #25 richest men in the world respectively have demonstrated.

In this article, I will give you an in-depth understanding of this investment legend and the investment approach and philosophy of Carl Icahn. In addition, I will also share briefly about his upbringing and how he started his journey into becoming the investment legend that he is now. Hopefully we can pick up one or two things along the way and add them to our arsenal of investment skills.

Carl Icahn grew up in a middle-class family in New York and he was the typical happy and street-smart New Yorker. Inheriting his father’s genes, young Carl was confused about his career options; Carl’s father was a lawyer who always wanted to be an opera singer. Icahn eventually graduated with an arts degree from Princeton University and went on to study Medicine at New York University. He would later drop out of NYU to join the army. After which, Icahn set his sight on the investment arena.

Icahn stopped fooling around and started his investment career properly at the age of 26 as an entry-level stockbroker with Dreyfus & Company in 1961. Seven years later in 1968, he would open his own brokerage firm called Icahn and Co. With his own company, Icahn became a real player as he made bold acquisitions in Nabisco, Western Union, Viacom, Motorola, and Time Warner.

He started to raid companies earnestly in the late 1970s and by the 1980s, Carl made a household name as a corporate raider in the United States. His most notorious raid is his 1985 raid of Trans World Airlines (TWA). He accumulated TWA shares and ended up taking the airline private in 1988. By 1993, Icahn would walk away with $469 million in profit while straddling TWA with $540 million of debt. TWA struggled under its debt before its tragic end in December 2001.

With this reputation, corporate boards would shake whenever they attracted the interest of Carl Icahn. He was the original corporate raider which spawned numerous imitators along the way. Because of Icahn, companies have gotten smarter after TWA’s demise. They implemented anti-corporate raiding measures such as the poison pill defense. Nowadays, someone like Icahn can’t repeat his TWA raid with such impunity.

Icahn’s transformation as an activist would gain the most public exposure through his involvement in Apple. In August 2013, Icahn had the opinion that Apple was holding too much cash and he wrote an open letter to Apple CEO Tim Cook. Icahn requested that Apple buy back $150 billion worth of shares to raise shareholder value. As he pushed for change as an activist, Icahn continued to accumulate Apple shares steadily.

Icahn was ultimately successful when Apple’s board agreed to repurchase US$130 billion worth of shares on 23 April 2014 and is expected to continue until December 2015. Prior to Icahn’s intervention, Apple only previously repurchased $66 billion from August 2012 to March 2014.

Apple stock shot up about 16% from around $70 in August 2013 to $81 in April 2014. Currently Apple trades at $109 and this represents a 55% increase (even after the recent market rout). Investors have started to follow Icahn’s trades and this phenomenon has been dubbed as “The Icahn Lift”.

This year, Icahn is once again of the opinion that Apple is undervalued and has set a target price of $240 according to his latest open letter dated 18 May 2015 on his Shareholder’s Square Table. Do you agree? It’s still anyone’s guess if Apple will hit those prices.

Icahn is a contrarian who delights in proving the market wrong by going against conventional wisdom. The markets are stupid in his opinion and he makes his fortune from its “natural stupidity”.

The statement above says a lot of his investment style. He is so confident about his abilities that some people might perceive it as being arrogant. However behind this supreme confidence lies matchless amounts of hard work and due diligence. Skeptics may question his bullish assumptions but they have never doubted his industry. Icahn hires two dozen associates just to sift through the market for investment ideas. When he makes his decisions, they are all well founded with a strong basis for their objectives.

For example, here’s the basis for Icahn’s targeted price of $240 per share for Apple:

Icahn also believes that Apple is underpriced at its current P/E of 12 given its potential exponential growth and when compared to the average S&P 500 P/E of around 18.

Source: Shareholder’s Square Table. Figures as at May 2015.

Unlike Warren Buffett, Carl likes his technology stocks and they are the top sector in his portfolio as seen in the chart below.

Icahn’s choice of Apple reflects his contrarian attitude as much as his bullish bet on energy. This is considering that oil prices have fallen 137% from its previous peak of $115.62 on 22 June 2014 to today’s price of around $48. 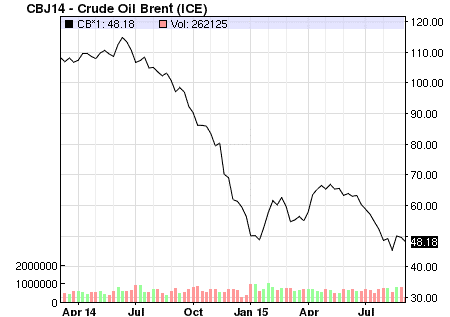 On August 24, Icahn via Twitter that he would be joining the board of Cheniere Energy.

Happy to announce we reached an agreement to join Cheniere $LNG board: http://t.co/RXbioJjEnf

This is seen as an endorsement for Cheniere Energy as Icahn is not known to back a losing horse. For example, he made US$2 billion on Netflix stock when he sold his remaining stake in June 2015.

If Warren Buffett is a value investor that educates us to buy companies with a margin of safety and a strong moat, Carl Icahn is an investor that shows us to buy stocks with high growth potential that is blatantly undervalued by the market. Warren Buffett doesn’t reveal the details of his work easily but Icahn is a person who publishes his investment ideas on Twitter and Shareholder’s Square Table to convince the rest of the market to follow his lead.

Nonetheless, whether you subscribe to Buffett’s or Icahn’s style of investing, the essential ingredient is still hard work and due diligence. Thank you for reading and all the best on your investment journey.