The name David Einhorn may not be immediately familiar to you but it should be after you read through this. David Einhorn was born into a middle class American family on 20 November 1968 and graduated with a first class degree from Cornell University in Political Science. After four years of working for others, he started his own hedge fund, Greenlight Capital, with a seed capital of $900,000 at the tender age of 27. Today, 20 years later, his hedge fund has $8 billion of assets under management and his personal net worth is estimated to be over $2 billion.

This is an impressive feat of achievement and for ordinary investors, something which we can aim for but may never reach. Nonetheless we can learn from Einhorn’s investment style and decide for ourselves if there is something worthwhile to add to our investment approach. In this article, I will extract David Einhorn’s investment strategy as obtained from various sources and present it as I understand it.

David Einhorn burst onto the scene when he publicly criticized the accounting practices of Allied Capital and accused them of defrauding shareholders at the Ira Sohn Conference Speech in 2012. He put his money where his mouth was and shorted Allied Capital stock heavily. One day after his speech, Allied Capital’s stock was suspended as there were too many sell orders on the New York Stock Exchange to handle properly. Allied Capital would later allege him of market manipulation. He would be later be investigated by the Securities Exchange Commission (SEC) for six years before it was found that he was right. This single incident made him a household name in the United States.

But it was the collapse of Lehman Brothers that cemented his reputation globally on 15 September 2008. Einhorn once again attacked the accounting practices of Lehman Brothers and was the opinion that they should have taken more losses for their housing market exposure. He made this known to Reuters as early as December 2007. When it turned out that he was right after all, Reuters praised his prescient warning about the instability at Lehman Brothers. Similar to the Allied Capital event, David backed up his claims with actions to short Lehman Brothers heavily. It was his call on Lehman Brothers’ collapse that vaulted him onto the world stage of first-class hedge funds investors.

However it should be noted that Einhorn goes both long and short for his equity investments and he is not an exclusively a short seller. He made profits from his long trades such as the holding the shares of Apple and Microsoft. There is a tendency for him to agitate for change in companies and he famously sued Apple to force it to distribute its vast and unused cash pile back to investors, but it was his short trades that caught the media’s attention.

David Einhorn aims for annual investment returns of 20% for his clients and he has largely delivered with some of the best performance in money management. During the first ten years of Greenlight Capital’s establishment from 1996-2005, Einhorn’s fund returned 29% annually. In the past five years however, Greenlight Capital has returned 12% on average annually as near-zero interest rates and record prices of stocks have narrowed gains for hedge funds everywhere. Einhorn has since revised his target returns to 15% of “alpha”.

The basis for David Einhorn’s success is his due diligence in the stocks he invests in. He likes to know as much about a stock so he has an analytical edge over his counterparty.

This can be seen the extract from his book, Fooling Some of the People All of the Time:

“We start by asking why a security is likely to be misvalued in the market. Once we have a theory, we analyze the security to determine if it is, in fact, cheap or overvalued. In order to invest, we need to understand why the opportunity exists and believe we have a sizable analytical edge over the person on the other side of the trade.”

This intensive diligence is applied for his decision to long or short a stock. After taking his position, David Einhorn would then share it with the larger investment community in order to persuade them on the merits of his trade. Sometimes he is successful and sometimes he is not as seen in this interview. Either way, he is fine with that.

The next distinctive feature of his investment approach is his macroeconomic awareness. He learnt that in 2005 when he presented the long case of house builder MDC to an audience. It was a better home builder when compared to its peers but he did not factor in the housing bubble which the US was in at that time.

This was how Einhorn admitted to his own mistakes in October 2009 after the worst of the Great Recession ended:

“I want to revisit this because the loss was not bad luck; it was bad analysis. I downplayed the importance of what was then an ongoing housing bubble. On the very same day, at the very same conference, a more experienced and wiser investor, Stanley Druckenmiller, explained in gory detail the big picture problem the country faced from a growing housing bubble fuelled by a growing debt bubble.

At the time, I wondered whether even if he were correct, would it be possible to convert such big picture macro-thinking into successful portfolio management? I thought this was particularly tricky since getting both the timing of big macro changes as well as the market’s recognition of them correct has proven at best a difficult proposition. Smart investors had been complaining about the housing bubble since at least 2001. I ignored Stan, rationalizing that even if he were right, there was no way to know when he would be right. This was an expensive error.”

David came to the conclusion that even if it is hard to predict when a macroeconomic disaster might happen, it would be prudent to buy some insurance for it in the future. In recognizing his error, David was well positioned to catch and profit from the collapse of Lehman Brothers which was badly exposed to the US housing bubble.

Before we move to the next feature of his investment style, let us understand how some hedge funds operate. If a fund would like to go long on airline stocks for example, they would also short oil companies. This is because low oil prices would benefit airlines for which energy cost is a substantial operating expense. Another method is to buy railway stocks because if inclement weather were to cause an airport shutdown, railway stocks would benefit from the airlines’ troubles. Einhorn , however, doesn’t subscribe to this:

“We accept more industry risk, but assemble a portfolio where we believe our longs are ones and twos and our shorts are nines and tens. We do not short to hedge. If we are uncomfortable with the risk in a position, we simply reduce or eliminate it. By having a portfolio of worthwhile longs and worthwhile shorts, we achieve a partial market hedge without having to spend capital on negative – expected – return propositions.”

This quote goes to show that he will only short a stock because it is poorly run and not because he wants to hedge his long position. This quote also showed how willing he is to concentrate his investment portfolio and is less willing to diversify.

In order to summarize, these are currently the main tenets of David Einhorn’s investment philosophy:

As of the second quarter of the year, David Einhorn is heavily biased towards technology stocks. 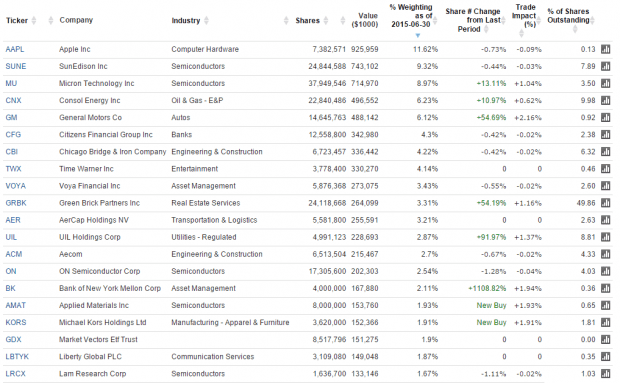 These are his stock positions as at 3o June 2015 according to his SEC 13-F filings. As you can see, there are more hits than misses. In addition, you can see that he has concentrated holdings in his favourite technology companies like Apple and Micron.

You can use this list for your consideration but you must always do your own due diligence. Thanks for reading and I hope that this article had been helpful to you with the investment style from the perspective of this young investment legend.