Jardine Matheson Holdings Limited (SGX: J36) is a conglomerate with multiple business interests located across the Asia-Pacific. Presently, it derives income from the following subsidiaries:

As I write, Jardine Matheson is amongst the top 30 constituents of the Straits Times Index and is worth US$23.6 billion in market capitalization. For this article, I’ll bring an overview of each of Jardine Matheson’s subsidiaries over the last 10 years, the group’s financial results, and provide an update on its newest acquisitions made in 2017 and 2018.

Here are 12 things you need to know about Jardine Matheson before you invest.

1. Jardine Pacific owns a portfolio of businesses which are involved in engineering, construction, restaurants, and airport services under key companies like Jardine Engineering Corporation, Hong Kong Air Cargo Terminals, Jardine Restaurant Group, Jardine Schindler Group, and Gammon Construction. In 2011, Jardine Pacific increased its stake in Pizza Hut Vietnam and acquired certain IT distribution businesses of SiS International Holdings. This contributed to a substantial jump in revenues from US$1.29 billion in 2010 to US$2.66 billion in 2011. Since then, its revenues had dipped marginally to US$2.39 billion in 2017. 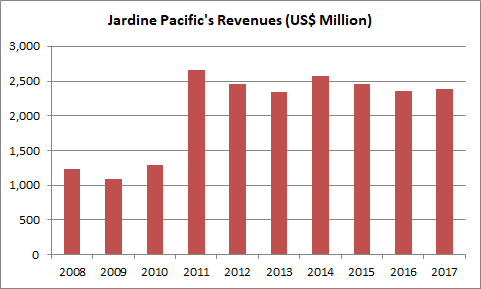 2. Jardine Motors operates motor vehicle dealerships and services in the UK, Hong Kong, Macau, and mainland China. Jardine Motors carries a portfolio of brands which include Mercedes-Benz, Porsche, Land Rover, Jaguar, Volkswagen, Aston Martin, BMW, and Audi. It has achieved a CAGR of 8.42% in revenues, increasing from US$2.68 billion in 2008 to US$5.54 billion in 2017. 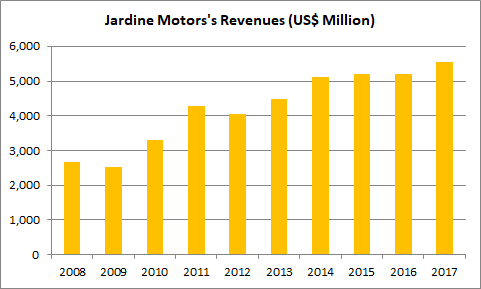 3. From its interest in Jardine Strategic, Jardine Matheson has effective stakes in the following subsidiaries:

4. From its interest in Jardine Cycle & Carriage, Jardine Matheson has effective 32% stake in P.T. Astra International Tbk, a conglomerate listed in Indonesia which has a diverse business interests that include automotive, financial services, heavy equipment, mining and oil palm plantations in the following companies:

5. Jardine Strategic has recorded rapid growth in revenue from US$18.5 billion in 2008 to US$33.1 billion in 2012. Subsequently, its sales dipped marginally to just below the US$30 billion mark in 2015 and 2016 before making a comeback to US$31.6 billion in 2017. Overall, Jardine Strategic’s revenues remained flat from 2012 to 2017. This is mainly due to weaker performances by Astra International which cancelled out growth in sales achieved by Dairy Farm International and Hongkong Land during the five-year period. Its poor performance was mainly caused by a drop in sales volume for motor vehicles and Komatsu tractors in Indonesia, particularly in 2015 and 2016. 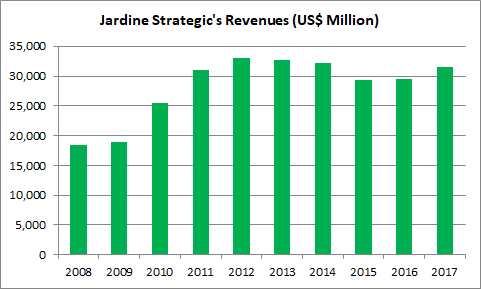 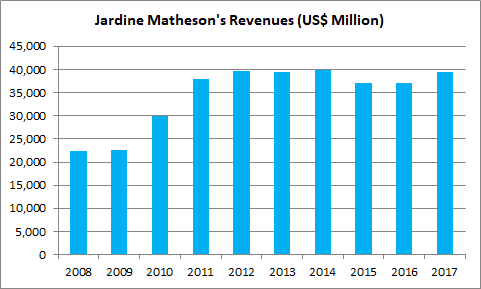 7. Jardine Matheson has increased its underlying profits by a CAGR of 7.44% over the last 10 years, from US$822 million in 2008 to US$1.57 billion in 2017. The conglomerate recorded lower profits in 2015 and 2016 due to a drop in Astra International’s profits in those two years. Apart from lower motor vehicle and tractor sales, the Indonesia-based company was also impacted by its 44.6% stake in Permata Bank when the bank recorded a massive drop in profit in 2015 and a substantial loss in 2016 as a result of higher loan-loss provisions in these two years. 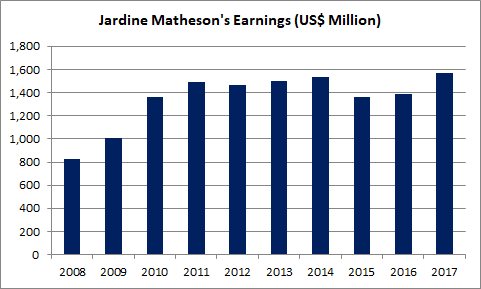 8. From 2008 to 2017, Jardine Matheson generated US$24.4 billion in cash flows from operations. It received US$6.7 billion in dividends from its investments in associates and joint venture companies. It also raised US$6.4 billion in net long-term debt. From its cash flow, it has spent a total of:

Jardine Matheson has increased its cash reserves from US$2.2 billion in 2008 to US$6.0 billion in 2017. Its debt-to-total equity ratio is 0.147. In short, Jardine Matheson is a conglomerate which is highly capable of generating cash flows from its portfolio of businesses to expand its mammoth business empire and reward its shareholders with growing dividends. 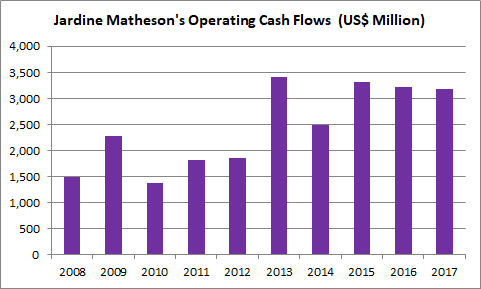 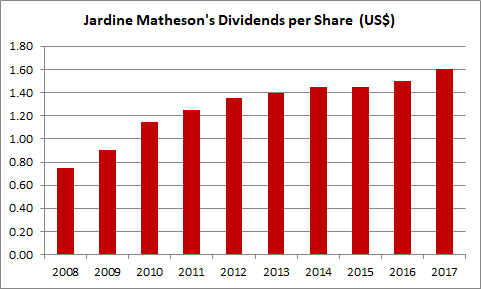 10. Jardine Strategic (of which Jardine Matheson has an 84% stake) acquired a 28% stake in Greatview Aseptic Packaging Company Limited in June 2017. Greatview is the second largest supplier of aseptic carton packaging in China and the third largest globally. Overall, Greatview has achieved growth in profits from RMB 279.7 million in 2014 to RMB 343.3 million in 2017. 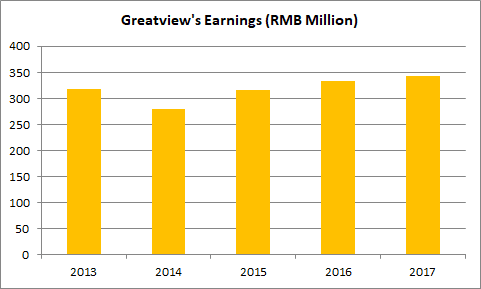 11. Jardine Cycle & Carriage (of which Jardine Matheson has a 63% stake) acquired a 10% stake in Vietnam Dairy Products Joint Stock Company (Vinamilk) for US$1.15 billion in November 2017. Founded in 1976, Vinamilk is the leading dairy producer in Vietnam with a 58% market share of the liquid milk market in the country. Vinamilk operates a total of 13 dairy factories, owns 10 farms, and has a distribution network of over 240,000 retailers across Vietnam. Overall, Vinamilk achieved growth in profits from VND5.8 trillion in 2012 to VND10.3 trillion in 2017. 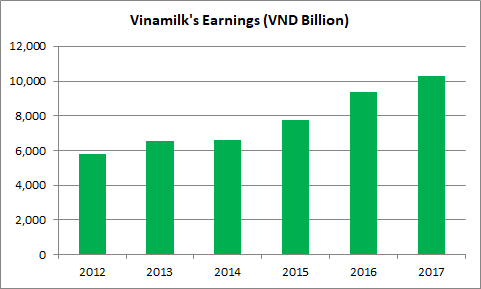 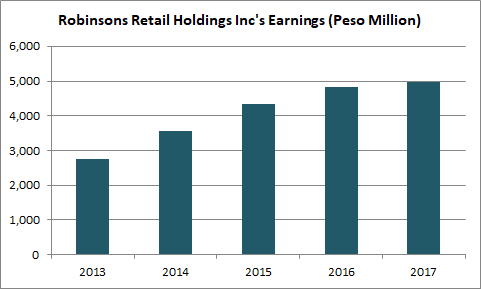 In summary, Jardine Matheson has pursued organic growth and investments in strategic companies that are market leaders across the Asia-Pacific over the past 10 years. Except for a ‘glitch’ in Astra International, its remaining portfolio of businesses have delivered a strong set of financial results and enabled Jardine Matheson to pay growing dividends to investors over the last 10 years.

Based on their latest investments, it seems to me that the investment strategy employed by Jardine Matheson is one that resembles Berkshire Hathaway. This is evident as Greatview, Vinamilk, and Robinsons are companies that possess relatively stable business models, are market leaders in their respective fields, and have built an impressive track record for growing profits consistently. With a healthy balance sheet and continued prudent investments made, Jardine Matheson is in a position to sustain growth in profits over the long term.