Kuala Lumpur Kepong Berhad (KL Kepong) (Bursa: 2445) is the third largest plantation company listed on Bursa Malaysia. It has an integrated business model and the company derives income mainly from both upstream palm oil plantation activities and downstream oleochemicals manufacturing activities. As I write, KL Kepong is worth RM26.3 billion in market capitalization.

In this article, I’ll bring a detailed account of KL Kepong’s tremendous success and achievements thus far and its outlook fir the future. Here are the 10 things you need to know about KL Kepong before you invest.

1. KL Kepong’s Plantation division achieved a CAGR of 16.70% in revenues over the last 10 years from RM1.80 billion in 2006 to RM8.46 billion in 2016. This is directly contributed by KL Kepong’s continuous efforts in enlarging its portfolio of plantation estates which resulted in steady increases in production of fresh fruit bunches (FFB), crude palm oil (CPO) and palm kernel (PK) during the 10-year period. 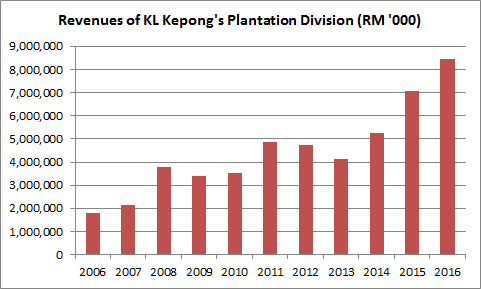 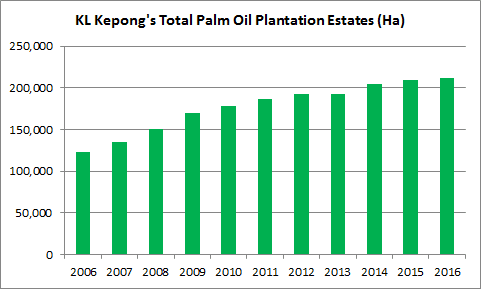 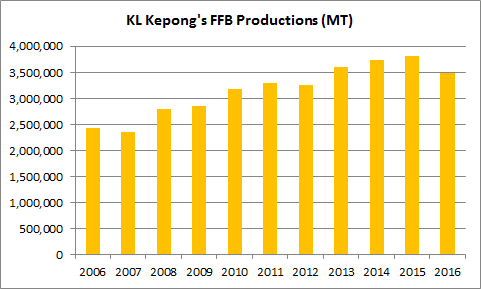 3. KL Kepong’s Oleochemicals Manufacturing division achieved a CAGR of 20.67% in revenues over the last 10 years from RM1.23 billion in 2006 to RM7.74 billion in 2016. Sales growth was attributable to multiple expansion projects, acquisitions, and joint ventures which has enabled KL Kepong to produce a wider range of oleochemical products such as fatty acids, glycerine, fatty alcohols, esters, amines, biodiesel and fine chemicals in plants located in Malaysia, China, and Europe. 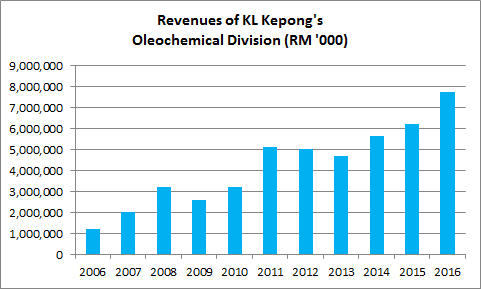 4. KL Kepong achieved a CAGR of 15.47% in group revenues over the last 10 years from RM3.92 billion in 2006 to RM16.51 billion in 2016. This is contributed by sales growth achieved by both plantation and oleochemicals manufacturing divisions during the period. 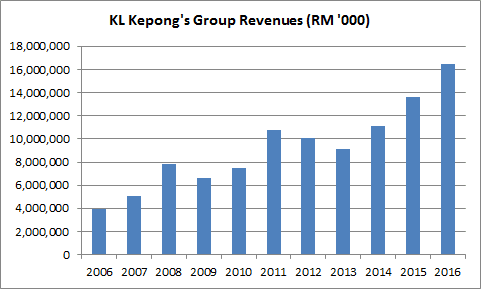 5. KL Kepong’s earnings are dependent on prices of palm oil products and costs of labour and fertilisers. For instance, 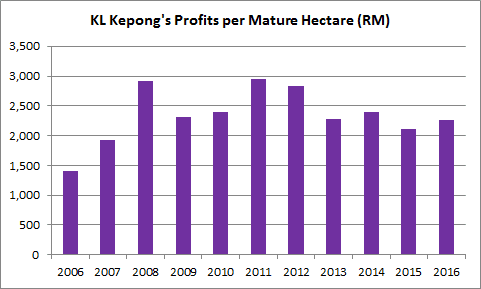 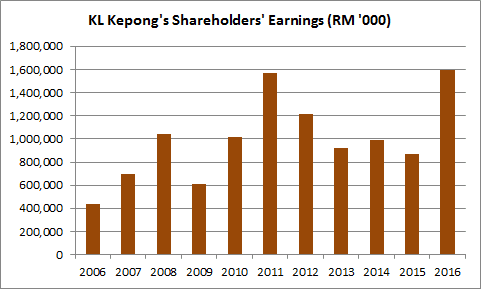 6. Overall, KL Kepong has a 10-year return on equity average of 14.90%. This means it has made, on average, RM14.90 in annual earnings from every RM100 in shareholders’ equity over the last 10 years. Here’s why we like companies with consistently high ROE.

7. KL Kepong generated RM9.31 billion in cash flows from operations over the last 10 years. It has also raised another RM3.11 billion in net long-term debt. Out of which KL Kepong has allocated RM5.26 billion to capital expenditures, RM1.39 billion to plantation development expenditures, and RM5.60 billion in dividend payments to shareholders.

This means that KL Kepong is itself a cash-producing business and doesn’t need to continually raise equity or debt to expand its business or reward its shareholders with dividends.

9. At present, KL Kepong has several potential risks involved and discussed initiatives to mitigate the impact on its business performance. They are:

10. Looking ahead, KL Kepong is embarking on several plans to sustain future growth. They include:

In summary, KL Kepong has built a track record of expanding its plantation assets, rising production and sales, high profitability, and consistent dividend payouts to shareholders. As at 30 June 2017, KL Kepong has RM1.33 billion in cash reserves, a current ratio of 1.93, and a debt-to-equity ratio of 0.35. Maintaining a healthy balance sheet remains important as KL Kepong intends to strike a balance between dividend payments and investing for growth in the future. This enables KL Kepong to maintain its position as one of the leading conglomerates in the plantation sector.