China is the second largest economy in the world. There used to a saying that if the United States catches a flu, the world will get sick. This analogy is now being used on China now. The fact that China is now experiencing a major economic flu can be seen in its recent market volatility. But before we dive into that, let us put the global economic conditions into context.

The largest economy in the world, the United States, is now the bright spot of the global economy. It has grown solidly to the extent where the Fed rose interest rates for the first time in more than nine years in December 2015 and the subsequent strong non-farm payroll (NFP) confirmed their positive bias.

Japan continues to struggle and Europe might grow this year but the Brexit (yup, not Grexit) referendum is an economic dark cloud. So the only major economy left deciding the fate of global growth is China.

China is making the transition from an export-based economy to one that is being powered by internal consumption. The road has been especially rocky in the past year. Leaving aside serious issues about rising corporate and government debts, China has experienced three major and highly visible episodes of equity market decline. The first major drop happened in June 2015 when the Chinese stock market crashed 40% which forced the central government into action. 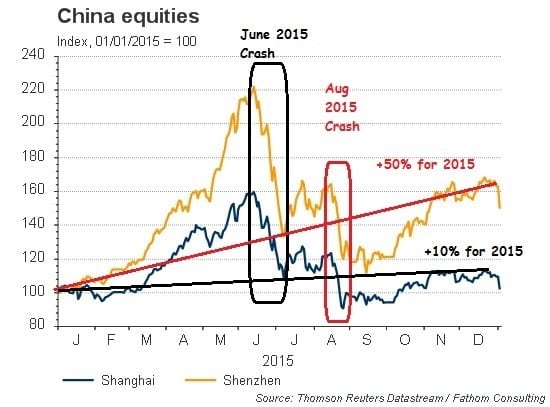 This prolonged and drastic decline triggered widespread resentment among the population and was only halted with unprecedented government intervention. The government pledged that such a decline would not happen again. Unfortunately, it did. China experienced its ‘Black Monday’ in August 2015 when the stock market declined 10% and shook confidence in the market again. However, despite the two major plunges, Chinese equity still finished the year nearly 10% higher for the year which was better than most developed markets.

The Chinese response to the two major market corrections last year was to introduce “circuit breaker” mechanisms from the first trading day of 2016. It was tested on the very first day itself when the CSI 300 index dropped 7% and stock exchanges across China were automatically suspended. This is why the Shanghai Composite Index flatlined on Monday. 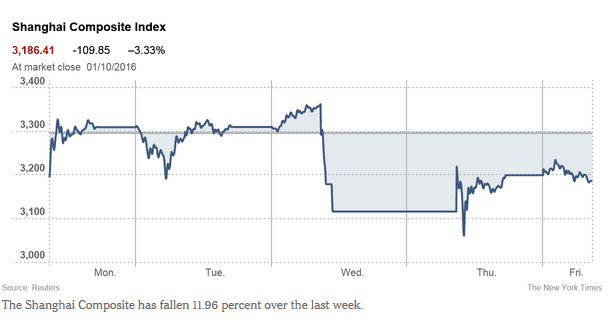 Now let’s move on to the reasons behind the persistent declines in the Chinese equity market. The most recent drop suggests that there are fundamental and psychological issues at play in China.

Let us first start with the fundamental issues. The first overarching point to note is that Chinese growth has been slowing steadily over the years. Compare the growth chart with the equity market chart and you can see a clear disconnect. 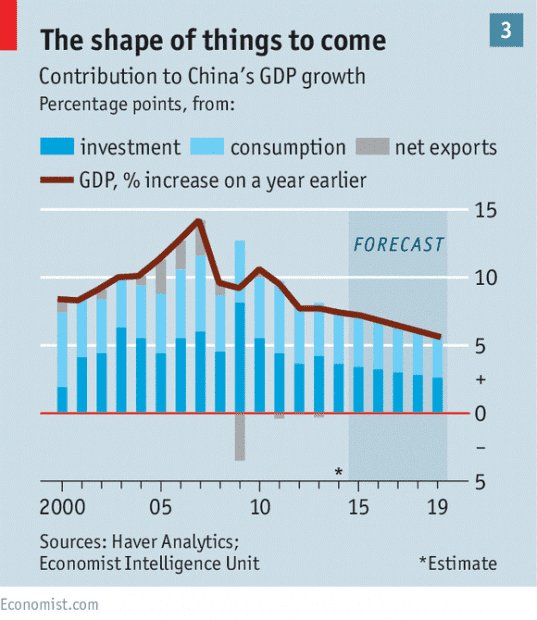 As its economy reaches a certain size, it gets harder and harder to grow bigger and faster. Secondly, China’s rapid growth from the 1990 to 2005 was powered by its export-oriented economy. Its labour and land was cheap and it was the factory of the world. This was slowly being eroded as Vietnam and other cheap locations competed with China on price, quality, and assurance (e.g. copyright infringements). This was put into renewed focus after the global financial crisis which shrunk the export market for China.

Given this pessimistic macro backdrop, it was baffling that Shenzhen equity doubled in the first half of 2015. While most professional investment managers in institutional investment firms caught the implications of this trend early, this was not apparent to the average investor in China.

Fidelity estimated that 80% of trading volume of China’s A shares came from retail investors in May 2015. They are unable to accurately price in economic reality and instead focus on hype such as the “One Belt, One Road” initiative. Fidelity concluded that the market rise in 2015 was based on momentum and sentiment — and not market fundamentals.

In other words, the majority of trades in China came from retail investors who wanted to speculate the market for quick returns. As we all know, there is no free lunch in this world. Institutional investors realized that a bubble was forming and started to exit in June 2015. If market forces were allowed to run free then, the adjustment would have been completed six months ago.

Instead the $3.25 trillion market rout created a political crisis for China’s government as it caused major disruption to the lives of ordinary retail investors. CNN listed ten major actions taken by the government to halt the decline in July 2015. One of the major tools used then was to allow half the companies on the stock exchange to suspend trading. Other tools included an injection of $62 billion in the stock market to prop up prices and a six month ban on share selling for major shareholders. According to the Financial Times, China’s “national team” purchased 6% of Chinese equity market in order to prop up the market.

Another point to note is that the majority of average retail investors do not read professional investment publications such as Fidelity and neither do they subscribe to professional advisory services. Instead they rely on respected journals like Caijing, but when its journalist reported on China’s market plunge, he was shamed on national television and took the blame in September 2015 before his court appearance.

Links to the Current Plunge

All these happened in 2015 but they also contributed to the 12% decline in the first week of 2016. First, the existing 6-month ban was set to expire in January 2016. Second, the circuit breakers introduced panic to the market when investors suddenly lost their ability to sell. Third, while China can prevent journals like Caijing from reporting their views, they ultimately cannot block bad news from being published.

For institutional investors, they have already known that the market was in bad shape but they were not allowed to sell. Goldman Sachs estimated that $185 billion was locked up by the ban. The whole world knew that the ban would be lifted this month and sold in advance. This was also triggered by the Caixin Purchasing Manufacturer Index (PMI) report on 3 January 2016 that showed Chinese manufacturing contracted again in December to 48.2 (a number below 50 is a contraction) and this was worse than market expectations of 49. This came just in time for the first trading day of the year.

This also coincided with the first day when Chinese authorities implemented the circuit breakers which quickly spooked Chinese investors. When the CSI300 dropped by 5%, the 15-minute break was supposed to allow investors to calm down. Instead, retail investors took the time to queue their sell orders. This triggered the stock market to drop further very quickly and the panic took a life of its own.

It is notable that this 12% plunge happened under the full attention of the Chinese government. Given all that they have done to reassure the market including extreme measures of arresting their own regulators, we have just witnessed a significant decline.

The Chinese government did what it could to manage the situation. The initial temporary ban on sales by major shareholders is now about to be extended according to a January 6 report. The circuit breakers were discontinued on January 8 as it was widely blamed for the market rout. On the same day, the PBOC pledged to loosen monetary policy which would have the effect of supporting the economy. 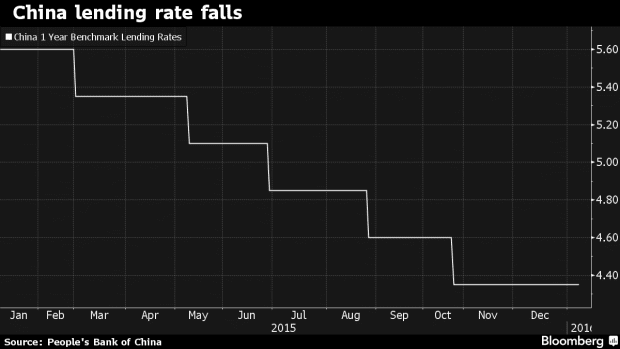 It is now a standard assumption that the PBOC will intervene whenever there is a market rout and lending rates had declined steadily over the past year. On the back of PBOC easing, the yuan depreciated steadily and is reaching RMB6.60 to USD1.

As I have mentioned at the beginning of the article, the global economy suffers when China suffers. During the Chinese equity rout in the previous week, global markets joined in the misery. This is not limited to the equity market. At the heart of this decline is the worry over slowing growth overall in China. 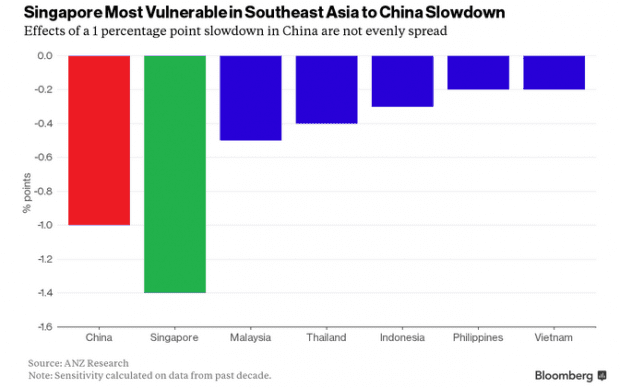 Singapore would suffer from a sharp decline in Chinese growth. Past data indicates that when Chinese growth slows by 1%, Singapore loses 1.4% of growth. The bright side is that this is based on past data. The establishment of the Asean Economic Community on 31 December 2015 and the conclusion of the Trans-Pacific Partnership (where the US pointedly excluded China for strategic considerations) in October 2015 could not have arrived at a better moment.

If there is a compelling reason and time to diversify our dependence from China, I can’t think of a better reason and year to do so than year 2016. The only question is whether we can do it fast enough before China pulls us into an economic abyss.