Hey, do you remember this little event back in 2008-2009 called the subprime mortgage crisis, or better known as the financial crisis? That was nearly a decade ago and, boy, were those good times. Oh, and remember that before the crisis, the root cause that led to the crisis was the lack of regulations to keep human greed and short-termism in check right?

The Wall Street heydeys from 2002-2006 mirrored the heydeys of the 80’s with the leveraged buyout boom with Michael Milken leading the charge at Drexel Burnham Lambert. Loose regulations allowed the banks to lever up and go crazy on derivatives trading; massive bonus payouts incentivized them exacerbate the vicious cycle of greed.

What stopped this was obviously the credit crisis but it was the suffocating regulations that followed that truly came down on the banks like a ton of bricks. Prop trading was essentially banned in the US, and many banks have been paying massive fines until today. Hilariously, many of the large banks have set aside billions just for litigation expenses — keeping an army of lawyers on retainer.

Return on equity for Wall Street banks have been declining every year due to the high costs of conforming to stiff regulations set by US and Europe, and the lack of “OMG LETS LEVER UP 20-TO-1 ON THOSE TOXIC ASSETS AND FLIP THEM TO THE NEXT BANK ONCE WE BUY EM” trading. 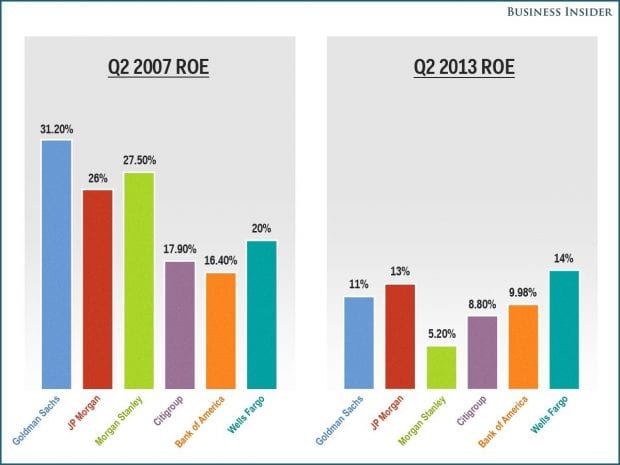 If the status quo continues – the banking industry seems like a sunset industry with declining returns and endless fines. But if it doesn’t, it might just bounce back a little – and it did, by a lot. Christmas has arrived early for Wall Street, and the banks can’t help but wait till The Donald takes over.

How does the Trump administration affect Wall Street? Let’s start with those nosey, stifling and irritating regulations that prevent excessive greedy behavior that could start another crisis:

Named after senators Barney Frank and Chris Dodd, the Dodd-Frank Wall Street Reform and Consumer Protection Act was passed in 2010 in response to the credit crisis. Like Sarbanes-Oxley Act that was passed back in 2002 in response to the Enron accounting scandal, people have criticized both laws for being reactive and not proactive. The problem is that people will always find ways to skirt rules to make money, and history has shown that people with the willpower would always find ways to skirt the rules.

Typical of any law, it is at least a few thousand pages long and perhaps only a handful of people have read it in its entirety. Here’s a quick summary of what the Dodd-Frank Act curtails of the banks:

One of the key components of the Dodd-Frank Act is the Volcker Rule that really brought the pain to the banks. Here are several tenets of the pain machine:

Proprietary trading – Prop trading was essentially ruled out in the US under the Volcker Rule as it prevented banks from making speculative bets in the markets with risky assets with their own accounts.

Ownership of funds – Ownership stakes in hedge funds and private equity funds would be highly limited. Before the crisis, many banks had several internal hedge funds that bet on the markets with the bank as their limited partners.

Strict compliance – Banks had to comply with even stricter rules if they’re large (in total assets). This is excluding the compliance rules set by the Third Basel Accord, or Basel 3.

The resulting effect of the new rules were banking jobs being cut permanently and a rise in compliance and risk hiring; indicating that the banks’ costs of complying with rules would increase whilst revenue generated from sales and trading would be sharply reduced, thereby explaining the dramatic drop in the returns of all banks over the years.

Wall Street CEOs have been fighting and lobbying against such regulations to no avail due to a Democrat majority in Congress led by Nancy Pelosi and a Democrat for a President (Obama). Democrats are known for pushing for more regulations, two of the 111th US Congress’ key legislations passed were the Affordable Care Act (Obamacare) and the Dodd-Frank Act.

Credit hedge funds salivated at the opportunity to buy billions upon billions of loans from banks wanting to shed their loan books in order to meet stricter liquidity standards.

So in comes The Donald in what would be possibly the craziest four years to come – he has won the election by feeding on populist anger against the establishment. Ironically, his administration would probably be even more pro-establishment than Clinton would ever dream of, and the very voters that voted him in probably had no clue what they are in for.

Sure, Wall Street may have been cozying up to Clinton during her campaign, made famous by her speeches at Goldman Sachs. Trump has been confusingly vocal against Wall Street, railing against Dodd-Frank but also mouthing off on banks to gain popular support. But typical of the last bastion of capitalism on earth, money will always go where the wind blows, and that wind is slowly turning into a hurricane – the winds of deregulation.

Congress has had a Republican majority that has frustrated Obama’s every effort from appointing a new Supreme Court judge to 500 other bills. Obama has also responded by vetoing bills sent to him by Congress. Now with a Republican President, Republicans have complete reign over the US’ future. Further, by appointing a conservative Supreme Court justice, they could empower all three branches of the US government to sway their way. There’s much going around about the Dodd-Frank Act being repealed under the Trump administration and the worrying part is just how many people have been through the Wall Street-Washington revolving door at Trump Tower.

An indication of this? Trump’s possible appointment of former Goldman Sachs banker Steven Mnuchin for Treasury Secretary. Mnuchin has been seen coming and going from Trump Tower. The controversial Steve Bannon is also another Goldman alum and of course, rumors of Jamie Dimon of JP Morgan being the next Treasury Secretary.

An article from Politico succinctly described the incoming administration:

“A populist candidate who railed against shady financial interests on the campaign trail is now putting together an administration that looks like an investment banker’s dream.”

Paul Ryan as Speaker of the House would be another powerful person to watch as he rallies the Republicans to deregulate the banks. You can almost hear the bankers’ laughs from their conference room tables. Trump will probably be signing anything Paul Ryan sends up to him, and despite his earlier rhetoric of being against the rich with closing the carried interest tax loophole and mouthing off at banks, his history and dealings with Wall Street speak otherwise.

Trump’s billionaire friends Carl Icahn and Wilbur Ross have strong connections to Wall Street and not to mention his children as well. Joshua Kushner, the brother-in-law of Ivanka Trump is a Goldman alum and the Kushner family has made its riches in the real estate business. The Kushner brothers have been subject to scrutiny regarding their admission into Harvard with just “average” grades after their father donated US$2.5 million to Harvard. So much for Trump appealing for the working class of America and railing against the “rich”.

The implications of a less regulated Wall Street is large – due in part to the deregulations of the energy industry by the Trump administration and looming large infrastructure spending.

Coal, natural gas and oil production will experience boom times due to the climate change denying Republicans being in charge (which is really stupid). Renewable energy will face further stonewalling, although the US might have reached a point where the renewable energy would only grow due to cheaper materials and ready infrastructure. Wall Street can then package deals for the energy industry under loose regulations, they’ll find a way.

Large-scale infrastructure spending, probably to the scale of Eisenhower’s interstate highway plan or larger would be in the cards as America’s infrastructure is aged and failing. That means there’ll be a deluge of municipal bonds being issued to finance the construction. Wall Street would only be too happy to aid in originating, transacting and housing these new bonds under their books.

With new products in the pipeline and perhaps older products (remember those CDOs?) being deregulated to the point where banks can start trading them again, Wall Street might return with a roar – and with even bigger banks after the consolidation of 2009, the returns could be massive.

History doesn’t repeat, but it sure as hell rhymes. We have gone through multiple financial crises, almost always brought on by greed and loose regulations. This cycle is starting to pick up – look at the stock prices of banks after Trump’s victory, it has been hockey stick-like, and the market is essentially saying “Looks like the 2003-2007 era is going to come back in a big way!”

This also means that a financial crisis is likely to happen – we’re at a turning point in interest rates where inflation has finally started to pick up, and trillions of cheap money sloshing around in low or negative yielding assets could see the light in newer issues and speculative assets spun-out by Wall Street. The crisis won’t play out immediately as it takes time for problems to compound, and the tipping point could be when Trump is no longer in power and some poor schmuck having to clean up after his mess after he leaves

We live in exciting times indeed.