Honest and competent — those are the traits Warren Buffett looks for in management before investing in a business. Managers must have integrity, intelligence, and the skill to allocate capital. They must have the ability to think like owners — to create value long-term shareholder value by reinvesting in existing operations, acquire businesses at reasonable prices, repurchase shares below their intrinsic value, and pay down debt.

Managers who defy the laws of value creation will eventually cause the business to lose value over time. For example, there was a recent article in the Wall Street Journal about the strategic and capital allocation mistakes made by Jeffery Immelt, ex-CEO of General Electric (GE).  At the end of his 16-year tenure, GE’s market valuation declined by 43%, vastly underperforming the S&P 500 index which increased by 148%. 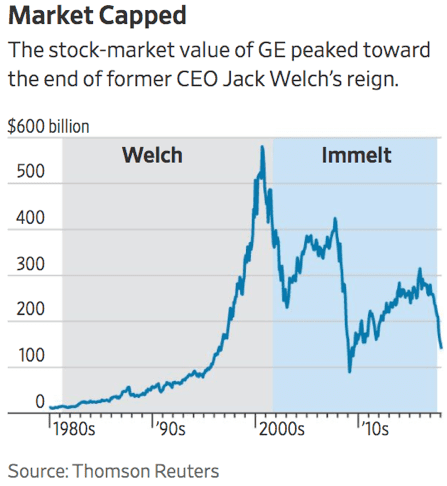 You would have suffered massive losses and opportunity costs if you invested GE. How then can we avoid making such a mistake? What are the management red flags we should look out for before jumping in?

Well, here are five things managers do that could potentially undermine their company and the value of your investment:

Be wary of managers that paint an overly optimistic picture of their business. They set high earnings expectations to attract investors and boost the share price of the company. Managers benefit from a sky-high share price because a large part of their compensation are made up of stocks and options.

To hit a target that is far and out of sight, managers adopt a ‘do-whatever-it-takes’ mentality to deliver on their promises. They acquire businesses and repurchase shares at any price to inflate earnings, trading long-term results for short-term gains.

The ‘do-whatever-it-takes’ mentality doesn’t just stop there, it trickles down from the management down to the employees. In order to hit the lofty sales target set by managers, employees resort to creative ways (sometimes breaking the law) to protect themselves from a pay cut and the loss of jobs.

Under pressure to perform, employees at Wells Fargo Bank created 3.5 million fake accounts in the names of their customers to hit the sales goal set by their supervisors. This cost the bank its reputation and money — $185 million in fines and penalties and an additional $142 million to settle class-action claims over its unauthorized accounts.

2. Straying away from core competencies

It is very common for managers to stray away from the core competency of the business in search of growth. The shift in focus will impact the company’s business model and the way the it generates its profits. If not done correctly, the managers may cause the company to lose profits or go bankrupt.

For example, GEICO, a U.S. auto insurer, did very well in the beginning by serving government employees who are financially stable and low-risk takers. It was a sound business model that allowed GEICO to collect their premiums on time, with low and infrequent claims.

In 1974, when real-time access to computerized driving records became available, GEICO moved beyond their traditional market of insuring government employees to include the general public. GEICO expanded far too aggressively. Actuaries made serious errors in estimating GEICO’s claims costs and reserves for losses, causing the company to underprice its policies and lose a lot of money. It was so severe that GEICO almost went bankrupt in 1976 until a certain Warren Buffett stepped in to acquire it.

The adage ‘price is what you pay and value is what you get’ applies to any investment you make whether you are buying a fractional ownership of a business or the whole business. No matter how good a business, if you overpay for it, it will turn out to be a bad investment.

In many cases, managers justify paying a high price for synergies that won’t materialize. Instead of growth, the company may experience a decline in sales and face the added problems of integrating the acquisition. The decline in sales will lead to a lower share price especially when the acquisition is mostly financed by a mix of debt and the issuance of undervalued shares. Earnings per share decreases as share count increases and a larger chunk of profits go towards paying higher interest. With the failure to integrate and add value to the company, managers often end up selling their acquisition at a loss.

In 1993, Quaker Oats Co. bought Snapple Beverage Corp. for $1.7 billion. Many analysts on Wall Street commented that the company overpaid for the acquisition by $1 billion. However, Quaker’s Chairman William D. Smithburg believed that, due to their similarities, he could turn Snapple into a smashing success like he did with Gatorade by applying the same marketing strategy.

However, shortly after the acquisition, not only did the synergies fail to materialize, the market for alternative soft drinks slowed down as competition intensified with Coca-Cola and Pepsi charging into the market with new products. Despite spending millions of dollars to revitalize sales, Quaker reported a combined operating loss of $160 million for 1995 and 1996. In just 27 months, Quaker sold Snapple at a loss of $1.4 billion to Triarc Cos. for just $300 million.

Buying back shares at a discount is a good way for a company to return capital to shareholders when there are no better alternative investments to deploy cash. Most share repurchases, however, have nothing to do with maximizing shareholder value. Under pressure to preform, managers who are incentivised to meet earnings targets tend to push a company to repurchase shares even when they are expensive. Repurchasing shares at high prices not only destroys shareholder value by generating a low return on investment, but also costs the company the opportunity to invest the capital elsewhere for growth and innovation.

For example, in 2016, instead of paying down $82 billion in current liabilities, GE spent $21.4 billion to repurchase shares at an average price of $30.30, more than double its share price of $13.44 as of writing. Strapped for cash, GE had to slash dividends in half, lay off employees, and sell $20 billion worth of assets to pay down its debt.

There is nothing wrong about managers who are rewarded handsomely for doing a good job. However, we have to pay attention to managers who write themselves a big pay cheque despite producing poor or mediocre results. There are two things wrong with this: 1) managers are placing their interests above yours and focusing on maximizing their compensation, 2) their outsized compensation is drawn at the expense of shareholders.

Despite earnings tumbling from a net loss of $515 million in 2016 to a net loss of $3.4 billion in 2017, Snap CEO Evan Spiegel awarded himself a massive stock grant of $637 million. To put that in perspective, his compensation was 77% of the $825 million generated by the company that year!

Read also: 3 ways to tell if CEOs and directors are overpaid

Before you buy shares of any company, it is essential that you have a good understanding of who is running your business. You can do your research by reading about your managers in news articles and annual reports. You can also study their track record from companies they’ve worked at in the past. And if you spot one or more of these management red flags and it makes you uncomfortable about your investment, maybe it’s time to reconsider it.