Mapletree Industrial Trust (MIT) is a REIT that owns a portfolio of industrial properties including flatted factories, hi-tech buildings, business parks, and light industrial buildings. As at 23 April 2018, MIT’s portfolio was valued at S$4.3 billion.

In this article, I’ll bring an overview of MIT’s full-year performances since its IPO and an update on its growth plans for the near future. Here are 13 things you need to know about Mapletree Industrial Trust before you invest. 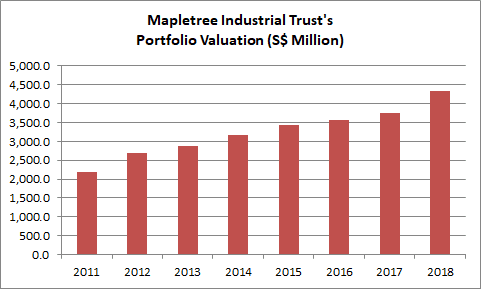 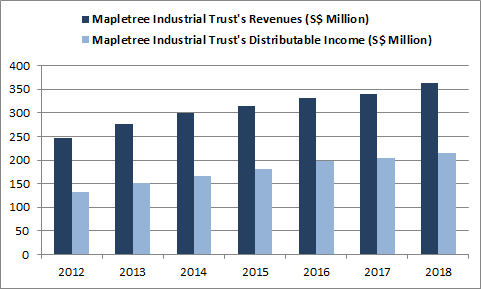 3. As at 31 March 2018, MIT had a total debt of S$1.46 billion (inclusive of a portion in a joint venture entity) and its gearing ratio is 33.1%. Its weighted average cost of debt is 2.9% and 85.1% of its debt is hedged against interest rate fluctuations. MIT’s weighted average tenure of debt is 3.3 years. MIT has a ‘BBB+ with Stable Outlook’ credit rating by Fitch’s Rating.

4. As at 31 March 2018, MIT has a portfolio occupancy rate of 89.6%. MIT’s largest tenant is Hewlett-Packard (HP) which accounts for 9.9% of gross rental income and is the REIT’s largest income contributor. While there is a slight concentration risk in HP since it accounts for a significant portion of income, MIT has over 2,000 other tenants and they each account for no more than 3.3% of gross rental income.

5. As at 31 March 2018, MIT’s weighted average lease expiry (WALE) is 3.8 years. Thirty-six percent of its leases are not due for renewal until 2022 and beyond, adding to MIT’s income visibility over the long term. The management has stepped up its efforts to retain its tenants and recorded a 77.2% tenant retention rate in 2018 — an increase from 71.0% from the previous year. 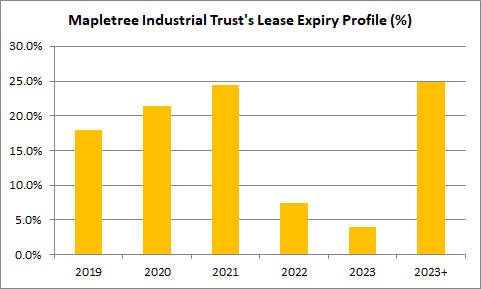 6. On 22 June 2017, MIT obtained the temporary occupation permit for Phase 2 of 1 and 1A Depot Close. The property was originally a flatted-factory cluster that was redeveloped into a built-to-suit facility for HP. Presently, the property is fully leased to HP for an initial period of 10.5 years with annual rental escalations with an option to renew for two additional five-year terms.

7. On 20 December 2017, MIT completed the acquisition of 14 data centres in the United States. MIT has a 40% stake in the US$753.8 million acquisition with the balance owned by MIT’s sponsor, Mapletree Investments. Presently, the 14 data centres have an average occupancy rate of 97.4% and a WALE of 6.0 years. The leases have a built-in rental escalation of over 2% annually. The acquisition will contribute its first full year of results in 2019.

8. On 13 February 2018, MIT finished a S$77 million asset enhancement initiative (AEI) at 30A Kallang Place and Kallang Basin 4. The AEI, which will add about 336,000 square feet of gross floor area, comprises the development of a new 14-storey hi-tech building and improvement works on existing buildings at Kallang Basin 4. Presently, MIT has secured 43.8% in committed leases for the combined property.

9. On 13 July 2018, MIT completed a built-to-suit data centre, Mapletree Sunview 1, for an established data centre operator. The project cost S$76 million to build and the data centre is currently fully leased under an initial lease term of 10 years with annual rental escalations and renewal options.

10. On 27 June 2018, MIT completed the purchase of 7 Tai Seng Drive for S$68 million from its sister REIT, Mapletree Logistics Trust. MIT has budgeted a further S$27 million to convert the seven-storey building into a high-specification building for an established ICT (Information Communication Technologies) company. The project is scheduled for completion in 2H2019 and will be leased to the ICT company under an initial term of 25 years with annual rental escalations when ready. Post-acquisition, MIT now owns a portfolio of 100 properties: 86 properties in Singapore and 14 data centres in the United States.

11. Mapletree Investments is the sponsor and the largest shareholder of MIT with a 32.8% shareholding presently. Mapletree is a leading integrated real estate development, investment, and capital management company that owns and manages S$39.5 billion worth of properties worldwide. MIT has right of first refusal (ROFR) for Mapletree’s industrial and business park properties in Singapore (with the exception of Mapletree Business City II which is earmarked for Mapletree Commercial Trust). This acquisition pipeline from its sponsor will provide MLT with a stream of potential acquisitions over the long term. 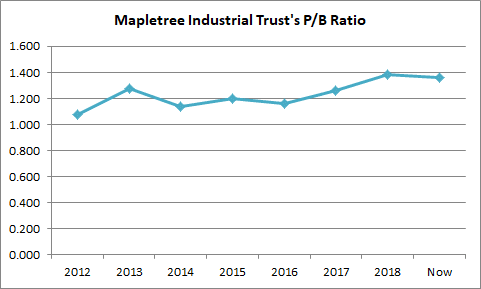 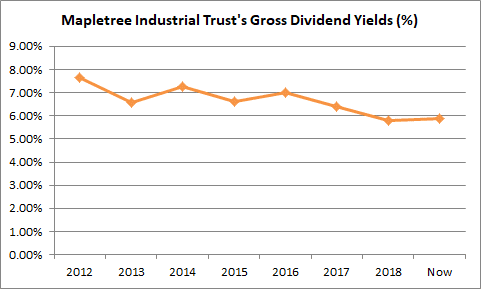 Mapletree Industrial Trust has delivered sustainable growth in revenues, distributable income, and DPU to its unitholders since its IPO in October 2010. Overall, the REIT has delivered 199.7% in total returns to unitholders who invested at its IPO at 93 cents per unit. (The total returns comprise capital gains of 118.3% and dividend yield of 81.4% over the eight-year period.)

Moving ahead, MIT has laid a strong foundation to grow its rental income further with the acquisition of 14 data centres in the United States and the completion of built-to-suit projects at Depot Close and Mapletree Sunview 1. Additional income is also intended to be derived after the completion of the AEI at 7 Tai Seng Drive in 2H 2019.