On 9 May 2018, Malaysians celebrated a momentous day in their country’s political history as they voted a new government into power, breaking Barisan Nasional’s 61-year rule in Malaysia. A total of 14.4 million voters cast their votes and, after the results were tallied, the opposition party, Pakatan Harapan (Coalition of Hope), secured the majority of seats in the new Malaysian parliament in a stunning upset.

Following news of Pakatan Harapan’s upset victory, the share price of MyEG Services immediately crashed when the market reopened on 15 May 2018. Over the next two weeks, shares of MyEG eventually reached a low of RM0.74 – a massive 71.3% plunge from RM2.58 just before the election. (The shares recovered slightly yesterday which I’ll talk more about below.)

Before the crash, MyEG was a stock market darling. The company provides e-government services for several government departments including the issue/renewal of driver’s licenses, renewal of vehicle road tax, renewal of foreign workers permits, traffic offences summons payments, and more. The company earns a small transaction fee for every transaction it processes.

Over the last five years, its share price had grown 11-fold(!) on the back of strong rising revenue and net profit. 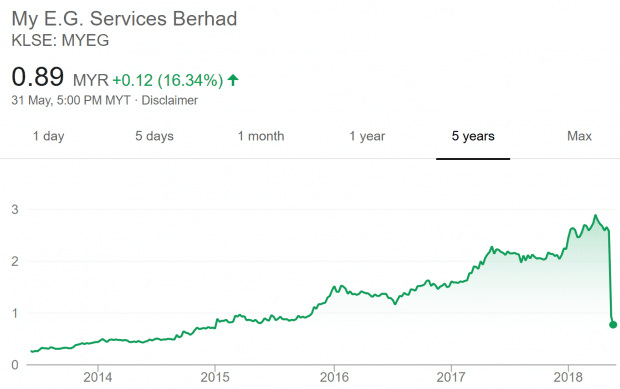 So what caused MyEG’s massive plunge? And is MyEG worth a look right now?

Here are five things you need to know about MyEG Services before you invest.

The massive selldown of MyEG was mainly due to fears that the new government would stop using the company as its e-government service provider (due to MyEG’s close links with the previous government), and the financial impact on the company’s GST monitoring project now that GST is zero-rated from 1 June, effectively abolishing the tax. Previously, the project was set to be a source of major earnings growth for MyEG.

The new government plans to reintroduce the old sales and services tax (SST) which was used in Malaysia since the 1970s before the implementation of GST. The details of SST have not been finalised yet and it remains to be seen if the new government will utilise MyEG’s system to monitor SST.

2. Revenue and profit growing for now

The reason for the pop is due to MyEG’s good set of third quarter results – revenue increased 12.4% quarter-on-quarter to RM111.53 million. Likewise, net profit increased 8.6% to RM58.55 million. For the first nine months of the year, revenue and profit have grown nearly 20% year-on-year to RM170.38 million and RM318.8 million respectively.

The growth was mainly due to higher contribution from MyEG’s motor vehicle trading services and new contribution from its foreign worker job matching and placement programme, which commenced in the second quarter.

Assuming no revenue from the GST monitoring project, CIMB has estimated MyEG’s net profit to hit RM250 million this year derived mainly from foreign worker and online road tax renewal services as these services should continue to run despite the change in government.

Moving forward, MyEG has potential non-government growth drivers including its new operations in the Philippines and its foreign workers accommodation programme which was heavily discussed at the 2017 AGM.

As investors, we prefer to see key management own a significant shareholding of their company as this aligns their interests with shareholders.

As at 31 December 2017, MyEG has sizeable cash reserves of RM244 million. It also has relatively low debt with its gearing ratio at 0.16 and current ratio at 2.54. At the moment, the company looks financially stable enough to weather its current crisis. However, the company’s gearing will most likely rise when it commences its foreign workers accommodation programme.

Before the crash, MyEG was trading at 46 times earnings, which in our opinion, was overpriced even before the election. Based on yesterday’s closing price of 89 sen, the stock now trades at a more reasonable P/E ratio of 15.9 (using 2017 EPS).

At the moment, MyEG remains a key provider of e-government services in Malaysia and is ’cautiously optimistic’ that it will be able to work with the new government. If the government decides to continue with MyEG as the main provider for its e-government services, the company should ride out this uncertain period and deserve a richer valuation in due time.

However, the risk is that the government could allow competitors to provide e-government services and fail to renew its contracts with MyEG when they expire. If there are changes in government policy that will affect MyEG’s services, the company has stated that it would make the necessary impairments and provisions which could see its share price tumbling again.

All things considered, investors need to take a careful stance and may want to look for further clarity from the new government before making any decision.