“I can calculate the movement of stars, but not the madness of men.”

This famous quote was spoken by Sir Isaac Newton after he lost his fortune in the South Sea Bubble in 1721. Isaac Newton was widely acknowledged as the foremost scientist of his time and was the one who famously defined the laws of gravity. His scientific achievements would be unrivalled until the arrival of Albert Einstein. Einstein only approached Newton’s league some 235 years later when a solar eclipse on 29 May 1919 proved his general theory of relativity correct and Einstein gained worldwide recognition.

The markets will always be volatile as seen in the recent 40% plunge in the China stock market. We cannot hope to control the market and the only feasible adjustment would be how we control our emotions and approach the market. Our advantage is that we can always choose not to join the madness of the market.

Let’s have a look at Isaac Newton’s involvement in the South Sea bubble: 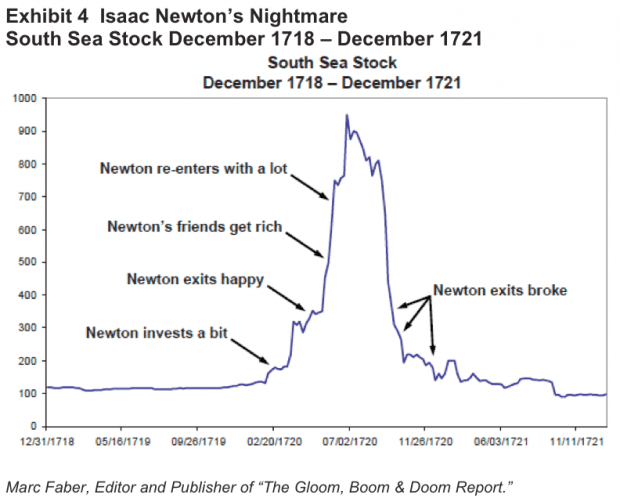 The chart above shows that Newton actually entered early in February 1720 when the South Sea Company’s share price was about £175 pounds (about £24,170 in today’s value). Newton also chose the right exit in May 1720 when the share price almost doubled. If Newton had been contented with his gain then, he would have walked away a very rich man.

The South Sea Company had fanned great expectations when it purchased the “rights” from the British government to all trade in the South Seas (the term used then for South America and the waters surrounding it). The popular idea was that booming trade with South America would bring home gold and fortune from the New World.

This speculative hype was fuelled by the government as they wanted to swap their sovereign debts (which they were unable to repay) with South Sea shares. So government bondholders would become company shareholders and receive dividends in lieu of periodic interest payments.

Shares were “sold” to politicians and heads of government but instead of paying for the shares, they were given the shares with the option of selling them back to the company for a profit when the market price increased. The South Sea Company also published the names of these elite shareholders, giving the company an appearance of legitimacy which attracted more buyers.

These conditions gave birth to a very effective marketing campaign in 1718 and it caught fire with the public. Their greed blinded them from the realities on the ground. In a matter of months, the price went from £100 to £1,000 per share! Pretty soon, it became obvious that the price of the shares did not reflect the profit (or lack of) that the South Sea Company was making. In other words, the company had no fundamental basis to grow ten times in five months. The only reason that it was simply because there was a greater fool who was willing to buy the shares.

By September 1720, prices had crashed back down to £150 and the fortunes of thousands of people were ruined. Those who bought shares on credit went bankrupt and failures extended to banks and goldsmiths as they could no longer collect loans made on the stock. The South Sea share price had fallen like gravity and in the midst of all this, Newton lost his pants.

The China stock market crashed 40% in June this year. Notice the similarities between the South Sea Bubble and the Shanghai Composite Index charts: 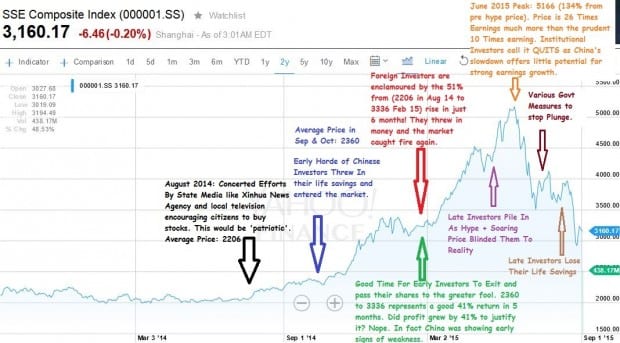 According to Bloomberg, the Chinese authorities started a concerted marketing campaign in August 2014 to convince their people to buy Chinese shares. Leading news agencies like Xinhua and People Daily partnered with local television channels to urge their viewers to buy Chinese equities as it would be patriotic and beneficial for the economy.

This was done in the background of the slowing Chinese economy and expert investors were not willing to give higher valuations to Chinese companies. The companies, many state-owned, were laden with debt and a rising stock market would essentially allow firms to funnel more money from the public. Investors would also be encouraged by their unrealized capital gains and increase their consumption. The economy would be stimulated as a result. The similarities with the South Sea Bubble should be clear by now.

Where sophisticated investors refused to thread, millions of amateur retail investors stepped in as the propaganda took effect. The new money flowing in from the retail investors aided by looser trading conditions boosted the Chinese stock market. Prices continued to soar but there was no fundamental basis to support valuation of 26 times earnings at the peak of the bubble. Investors who were late to the game lost their shirts when the stock market subsequently crashed.

The only notable difference between the 1720 bubble and the 2015 bubble was the magnitude of the peak. In 2015, the bubble burst after 134% rise while the bubble grew to nearly 1,000% before it burst in 1721. The market has grown more efficient over the last three centuries.

My rule of thumb is to pay between 5-10 times earnings when the economy is slowing down from its high growth rates of the past. In my opinion, the market was generally rational prior to the government hype:

It was rational that the Chinese equity market declined 54% from November 2010 to June 2014 as the Chinese economy slowed down from stellar double-digit growth of 10.6% in 2010 to 7.4% in 2014. The market was pricing in slower growth in China and also higher risk of doing business as major Chinese companies got more indebted. However, sentiment was stirred up as the market shot up almost vertically after government intervention in August 2014 and fundamentals were largely forgotten.

So how can an investor prepare himself psychologically as the bubble starts to build?

The China stock market bubble will not be the last. Recent bubbles include the 2000 dotcom and U.S. housing bubble from 2004 to 2007. It is history repeating itself and a lesson that generations of investors will learn over and over again.

Everything seems rosy just before a bubble bursts but the moment it does, many investors will lose their money and wealth will be transferred from the foolish to the wise.