Formed in 1932, Oversea-Chinese Banking Corporation Limited (OCBC) operates in Singapore, Malaysia, Indonesia and Greater China and has more than 610 branches and offices in 18 countries. Today, OCBC is the second largest financial services group in Southeast Asia (after DBS Group and followed by UOB in third) and worth over S$58 billion in market capitalization.

In this article, I’ll bring an overview of OCBC’s performance over the last 10 years, the current risks it faces, and its outlook in the near future. Here are 12 things you need to know about OCBC before you invest.

1. OCBC has achieved a CAGR of 12.6% in loans and bills receivables over the last 10 years. It increased from S$71.3 billion in 2007 to S$234.1 billion in 2017. This is due to two main factors: Firstly, OCBC has grown its loan disbursement over the last 10 years, particularly in the property loans, and syndicated and term loans segments. Secondly, OCBC acquired 100% ownership of Wing Hang Bank for S$6.2 billion in 2014. This acquisition increased OCBC’s loan portfolio by S$23.4 billion, causing a substantial hike in its loan portfolio from 2014 onward. 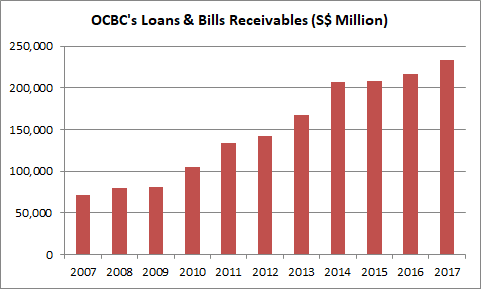 2. OCBC has achieved a CAGR of 9.2% in net interest income (NII) over the last 10 years. It has grown from S$2.2 billion in 2007 to S$5.4 billion in 2017. OCBC’s overall growth in NII was slower than its growth in loan portfolio due to a gradual decline in net interest margins over the last 10 years — from 2.10% in 2007 to 1.65% in 2017. The lower margins were mainly due to the falling interest rate environment and the bank’s decision to reprice its mortgage loans to remain attractive to property buyers. 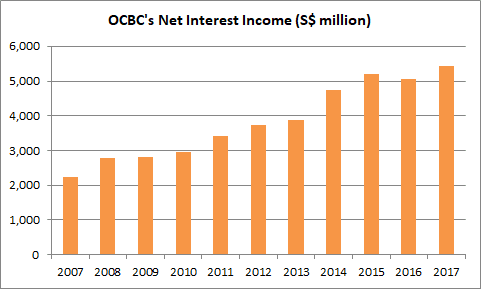 3. OCBC has achieved a CAGR of 7.8% in non-interest income over the last 10 years. It increased from S$2.0 billion in 2007 to S$4.2 billion in 2017. This is contributed by two key factors: Firstly, OCBC recorded a growth in fees & commission-based income which are sourced from wealth management activities, loan-related, and credit card services. Secondly, Great Eastern Holdings, an insurance company and subsidiary of OCBC, contributed stable earnings over the last 10 years. 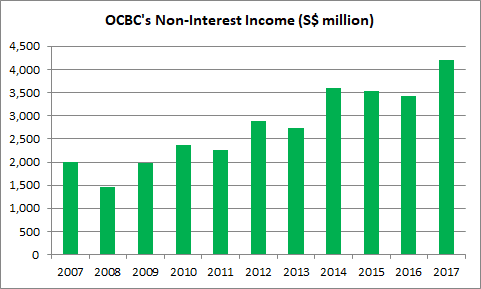 4. As a result, OCBC has achieved a CAGR of 8.45% in total income in the last 10 years. It has grown from S$4.3 billion in 2007 to S$9.6 billion in 2017. This is directly contributed by steady growth in both net interest income and non-interest income in the 10-year period. OCBC has also maintained a stable cost-to-income ratio of approximately 40% throughout the 10-year period. This means OCBC has kept its costs in line with growth in income and maintained its cost discipline during the period. 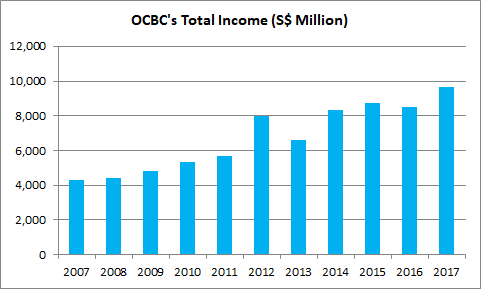 5. On 30 September 2014, OCBC increased its equity stake in Bank of Ningbo Co. Ltd from 15.34% to 20.00% for S$361.3 million. Upon completion of the acquisition, Bank of Ningbo became an associate of OCBC and has contributed S$300-400 million in annual earnings to OCBC, substantially increasing its earnings from associates over the last three years. 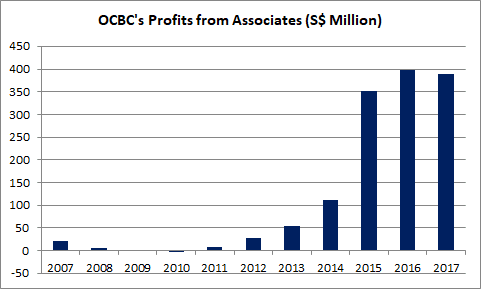 6. OCBC has achieved a CAGR of 7.2% in shareholders’ earnings over the last 10 years. It has doubled from S$2.1 billion in 2007 to S$4.1 billion in 2017. This is attributable to OCBC’s steady growth in total income, additional profits from major acquisitions (e.g. ING Asia Private Bank in 2009 and Wing Hang Bank in 2014) and a stable cost-to-income ratio during the period. In 2012, OCBC reported exceptionally high earnings of S$4.0 billion. This was due to one-off gains of S$1.32 billion from the sale of Fraser and Neave Ltd and Asia Pacific Breweries Ltd. Excluding this, OCBC’s 2012 earnings would be S$2.8 billion which is in line with its overall growth trajectory. OCBC has a 10-year return on equity average of 10.81%. 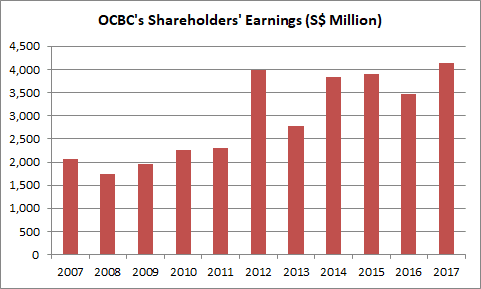 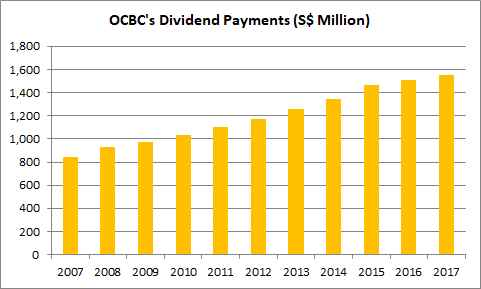 8. OCBC reported a total capital adequacy ratio of 17.2% in 2017. It is in line with Basel III capital standards and above the minimum capital adequacy ratio (including buffer requirements) of 11.5% required by the MAS. This means OCBC is well-capitalized to pursue business growth and to meet adverse market or economic situations in the future.

9. In 2017, OCBC took a prudent stance to downgrade its offshore support services and vessels (OSV) exposure as the views on the industry continue to be depressed. The industry accounted for a rise in non-performing loans (NPL) from S$2.78 billion in 2016 to as high as S$3.42 billion in 2017, hiking OCBC’s NPL ratio from 0.6% in 2014 to 1.5% in 2017. As I write, crude oil prices have recovered to around US$70 a barrel, a significant improvement from US$30-40 a barrel just a few years ago. Despite the price recovery, the OSV industry remains depressed as it lacks income visibility for the near future. As financial institutions meet a more stringent capital adequacy ratio set by the MAS, it is prudent for OCBC to limit its exposure on loans disbursed to uncertain markets. 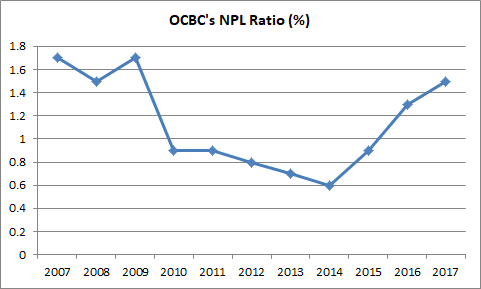 10. OCBC, similar to any bank and financial institution, is at risk of cyber-attacks and security breaches. Which is why OCBC invested S$240 million to build a new state-of-the-art regional data centre. The centre has been fully operational since the third quarter of 2017 and is designed to support the operational requirements of OCBC and its entities for the next 30 years.

11. On 11 May 2017, OCBC announced that it agreed to acquire National Australia Bank’s Private Wealth businesses in Singapore & Hong Kong. This acquisition was completed in November 2017 with OCBC adding S$2.06 billion in loans and S$2.42 billion in deposits. These businesses will fully contribute to OCBC’s financial year in 2018.

OCBC has built a track record of delivering continuous growth in total income, earnings, and dividend payments to its shareholders over the past 10 years. OCBC is consistently ranked among the world’s top 50 safest banks by Global Finance and was named the ‘Best Managed Bank in Singapore and the Asia Pacific’ by The Asian Banker in 2016.

Moving ahead, OCBC continues to expand its presence across the Asia-Pacific as it embraces the growth in ASEAN and China’s Belt and Road Initiative to enhance greater economic integration across Asia.

Read also: Our 10-year performance summaries on DBS and UOB