In my previous article, you have seen the rise and fall of the China stock market. The bubble burst when the Shanghai Composite fell 40.45% in 15 trading days. While no one can predict when the crash will happen, it was clear to institutional investors that a bubble had formed when a record number of illiterate investors were allowed to open margin trading accounts.

As the institutional investors were bailing out, deluded Chinese investors continued to jump onto the bandwagon as the stock market continued to rise. The plunge caught many investors by surprise as they were fed with the bubble message that stock prices will rise forever. A 32-year-old speculator jumped to his death after he leveraged four times his net worth to bet on the stock market. He believed that the ‘One Belt, One Road’ policy would support railway stocks. This is only one of the many stories that escaped the Chinese censors and given the magnitude of the plunge, this is likely to be the tip of the iceberg.

The point is while people can queue up and spend recklessly in good times, they have a heavier price to pay when the bubble bursts. Only the Greek equity market is more volatile than the Chinese stock market in recent days and they have good fundamental reasons for that. The Chinese authorities are now trying to intervene and various measures have been taken to prevent further losses as China enters its weakest growth in decades and its property market remains in the slumps.

We shall touch briefly on the human cost of the plunge before we look at the measures taken by the Chinese government in its attempt to stop this mass haemorrhaging. Next we would look at the opportunities ahead of us and also to consolidate the lessons learned from this recent bubble.

Strong political will to stop decline

The stock market was supposed to be the one bright spot of the Chinese economy this year, hence there is great political strength to stop the plunge. One of the first casualties of the crash was new listings. The Chinese authorities suspended the listing of new IPOs to prevent new funds from being tied up in new IPOs instead of flowing into existing stocks to enhance market liquidity.

At the same time, a 120 billion yuan market stabilization fund was set up by brokers led by Citic Securities Co. Mutual funds also pledged to act as investors by using a buy and hold strategy in the markets for at least one year. It is possible for them to stop the plunge for a few days but coupled with the ongoing Grexit saga, it is unlikely they can substantially turn things around as the market sentiment remains bearish.

The China stock market has a daily volume of 2 trillion yuan and 120 billion yuan would not last a day. Hordes of investors would be glad to offload their stocks as they panic or if they receive margin calls from their brokers. This fund might help the blue chips in a limited manner but small chips will still be at the mercy of the market.

Cognizant of the risk that margin calls would further exacerbate the fall in stock prices, the Chinese authorities removed their margin restrictions. On July 1, the Chinese Securities Regulatory Commission (CSRC) cancelled a forced margin calls when margin ratio hits 130%. Instead it would now allow brokerages to decide their own margin requirements. The whole intention is to stop the margin call related plunge of the Chinese equity market. However the risk is that this unfettered use of leverage would cause investors to double down on their bets and risk another bubble.

China’s margin trading levels surged up over the past five years and surpassed that of the United States. This is followed by the CSRC announcement of an investigation into the recent plunge of the stock market. Short sellers were targeted in a probe for market manipulation. This is from the Hong Kong based South China Morning Post:

“The China Daily newspaper said on Friday the CSRC was probing investors who used stock index futures to short the market and the industry watchdog would send criminal cases to the police.”

So now it is implied that short selling is illegal in China even when it is clear that a stock market bubble had formed and the logical step would be to short it. This would scare away short sellers in the short run and help stall the downward slide, but it would make the Chinese market less efficient.

Lastly, the SCMP reported that transaction fees would be lowered by 30% for both the Shenzhen and Shanghai exchanges with effect from August 1. All these measures showed the determination of the Chinese authorities to stop the bleeding and that it had caught the attention of the State Council. It is clear that these measures would be implemented. The more relevant question though would be if this would be enough to stop the market plunge.

My opinion is that it is sufficient for it to stop the plunge for a few days at most but as long as the Greek crisis continues to brew, the Chinese equity market is still subject to weakness ahead. In addition, the retail market would continue to shrink as those new investors who came in with expectations of a gold rush are now awakened to the lesson that there is no free lunch in the world.

Hence investors should not rush into the Chinese equity market on the strength of the Chinese measures to stop the rout. This is too soon and for the sake of safety we should wait until the Greek crisis clears. There is no need to catch the bottom as it is too risky to catch a falling knife. Instead we should exercise patience and allow opportunities to come to us.

When the situation is clearer, the best way to gain exposure to the China stock market is through an ETF. You don’t have to open a Chinese brokerage account to purchase these ETFs; your local broker should be able to do that for you. For example, UOB Kay Hian provides the following China ETFs to investors: 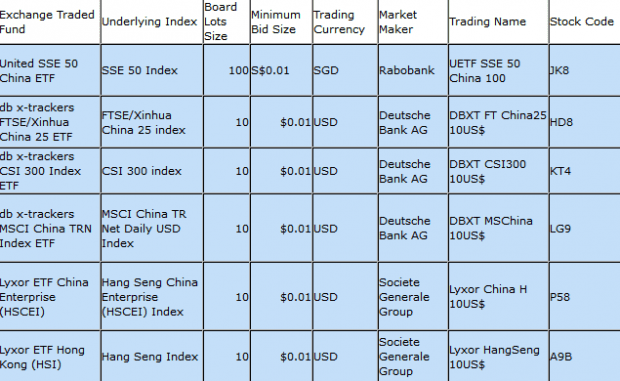 All these are SGX-listed ETFs. The United SSE 50 China ETF tracks the Shanghai Composite Index and is also conveniently denominated in Singapore dollars for local investors. The rest are in US dollars and for now this is a good currency to keep as it is strengthening amid the Greek crisis. 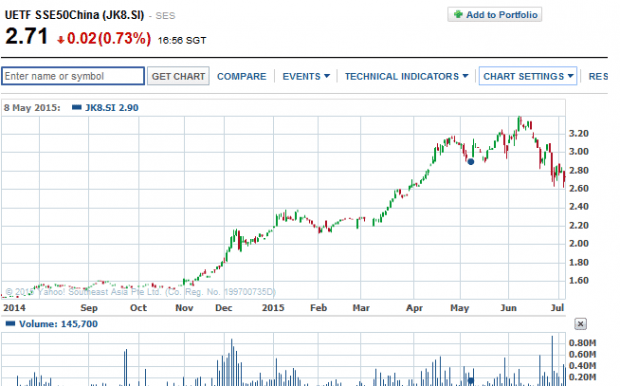 One weakness of the United SSE 50 China ETF would be its relative lack of liquidity with only 278,900 shares traded daily on average. Another alternative would be the iShares China Large-Cap ETF (FXI) which tracks the top 25 Chinese stocks. FXI trades on the NYSE Arca and has an average daily transaction volume of 35 million shares. 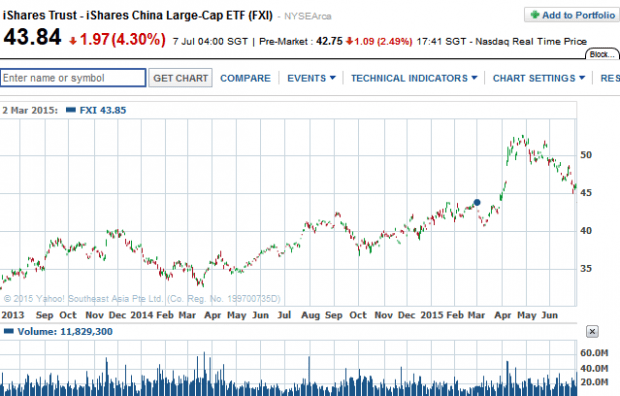 This crash has showed the importance of not following the crowd and doing your homework independently before committing your funds for investment. Investors should also know their limits. In this instance, millions of illiterate people in China should not even have been allowed to open a trading account in the first place. Investors should always stay within their circle of competence (with a view to always expanding it).

There is no free lunch in this world. It is important for investors to note the risks involved in every investment. This would apply even if you are investing in the local market even if we have stricter and more well-enforced rules here in Singapore.

The bursting of the stock bubble has affected consumer confidence as over 3 trillion yuan has been wiped out over the past three weeks. We should put things in perspective and realize that despite the 40% plunge, the Chinese market is still up 78% from the start of its rally in July 2014. The Chinese economy is still growing strongly and in time the China stock market will recover as well. But it is crucial that margin usage is curbed and new regulations are in place to prevent amateurs from speculating in the market.