Padini Holdings Berhad is a fashion retail conglomerate which owns nine household brands in Malaysia. They include Padini, Padini Authentic, P&Co, PDI, Miki, Brands Outlet, Vincci and Vincci Accessories. Collectively as a group, Padini markets its merchandise in over 200 locations across 10 countries.

In this article, I’ll bring an update on Padini’s financial results and introduce a few valuation metrics to assess its current stock price. Here are 14 things you need to know about Padini Holdings before you invest.

1. Yee Fong Hung remains the largest revenue contributor to Padini, accounting for 38.4% of group revenues in 2018. The subsidiary derives income from selling clothing apparel in Brands Outlet stores located across Malaysia. In 2018, it opened seven new Brands Outlet stores, lifting its store count to 54. This resulted in another year of growth with revenues rising to a new high of RM644.0 million in 2018. 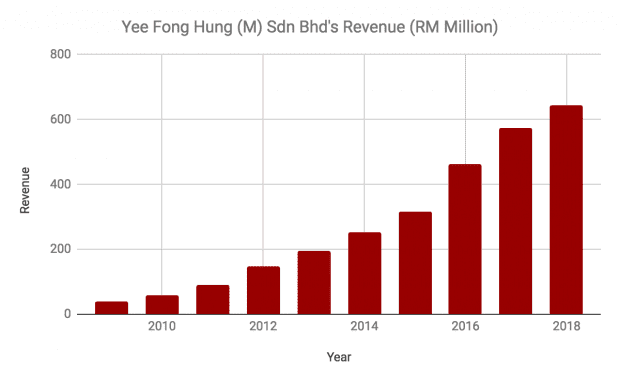 2. Padini Corporation retained second place in terms of sales contribution to Padini, accounting for 32.7% of group revenues in 2018. These subsidiary sells Padini-branded clothing apparel mainly in Padini Concept Stores. In 2018, Padini opened five brand-new Padini Concept Stores, lifting its store count to 48. As such, Padini Corporation increased its revenues from RM523.8 million in 2017 to RM549.5 million in 2018. 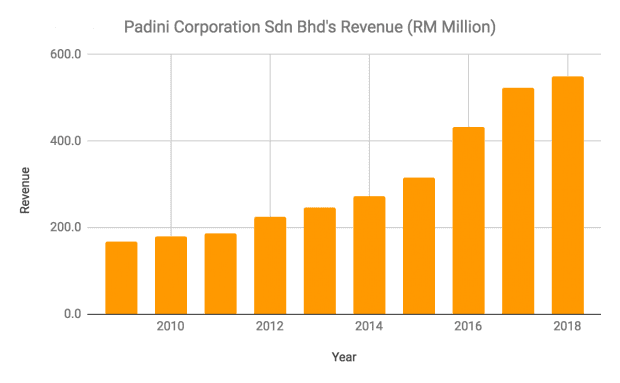 3. Vincci Ladies Specialties is the third largest sales contributer, accounting for 16.2% of group revenues in 2018. The subsidiary retails fashionwear in Vincci stores in Malaysia and franchise stores located across Southeast Asia and the Middle East. In 2018, it opened two Vincci stores in Indonesia, but closed a store in Pakistan and another three stores in Cambodia. This caused a slight fall in store count from 77 in 2017 to 75 in 2018. But nevertheless, its revenue grew marginally from RM270.6 million in 2017 to RM272.4 million in 2018. 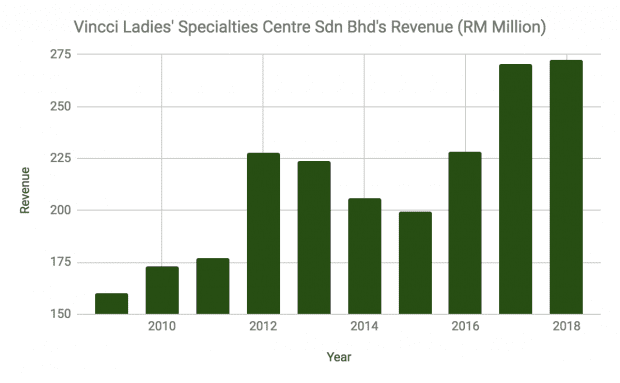 4. SEED Corporation accounted for 9.2% of Padini’s group revenue in 2018, making it the fourth largest sales contributor. Padini shifted the sales channel of SEED-branded products from consignment counters to Padini Concept Stores in Malaysia. Evidently, the switch in strategy has proven to be effective. In 2018, SEED Corporation reported RM154.3 million in revenue, the highest in the last 10 years. 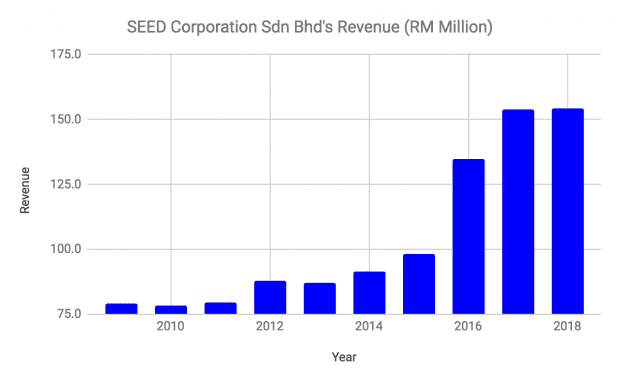 5. Mikihouse Children’s Wear is the smallest sales contributor to Padini, accounting for 2.9% of group revenue in 2018. Similar to SEED, Padini reduced Mikihouse’s consignment counters and now sells its apparel in Padini Concept Stores. In 2018, this subsidiary reported a small dip in sales to RM48.1 million from RM49.3 million in 2017. However, sales in 2018 is relatively high as it is still the second highest ever recorded in the last 10 years. 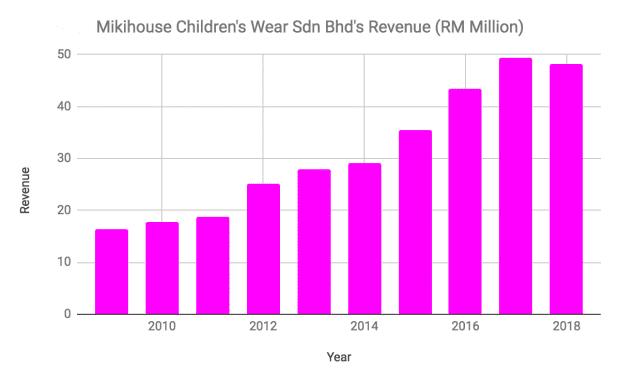 6. Padini has achieved a compound annual growth rate (CAGR) of 15.05% in revenue over the last 10 years. Revenues increased from RM475.5 million in 2009 to RM1.68 billion in 2018. This increase is directly attributable to sales growth from the five subsidiaries stated above. Padini has maintained a stable net profit margin of 10-11% throughout the 10-year period. This has been achieved by having a strong supply chain that ensures good management of inventories, sourcing and supplies, and logistics. 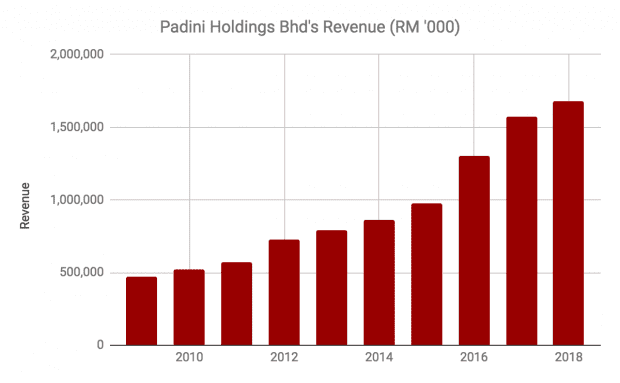 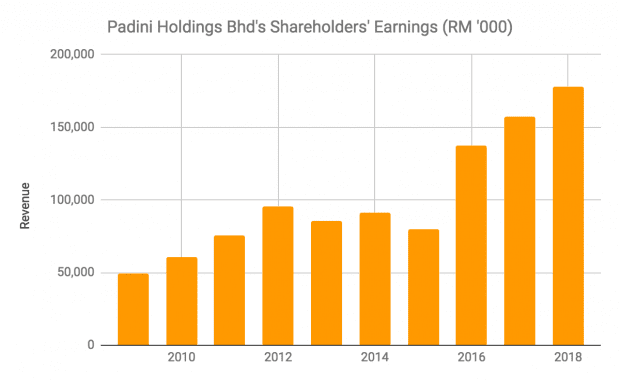 8. From 2009 to 2018, Padini generated RM1.23 billion in operating cash flows. Out of which, it has spent RM328.7 million on capital expenditures and paid RM542.0 million in dividends. Most of it has been retained and Padini’s cash balance has grown from RM65.6 million in 2009 to RM451.4 million in 2018. Padini is quite clearly a cash-generating business that does not need to raise equity or debt continuously to expand its business or to reward its shareholders with dividends.

9. The fashion industry is dynamic, rapidly changing and very competitive. Competition has heightened in recent years with the entrance of foreign brands such as Zara, Uniqlo, Marks & Spencer, and H&M in major shopping malls across Malaysia. In addition, e-commerce will post a new retail challenge to Padini as an increasing amount of shoppers choose to spend online in the future. Their buying decisions may be heavily influenced by social media influencers which could result in changing consumer tastes among fashion brands. Thus, Padini’s future success lies greatly in how well the management is able to craft a niche among existing fashion brands and adapt to the rise of e-commerce. 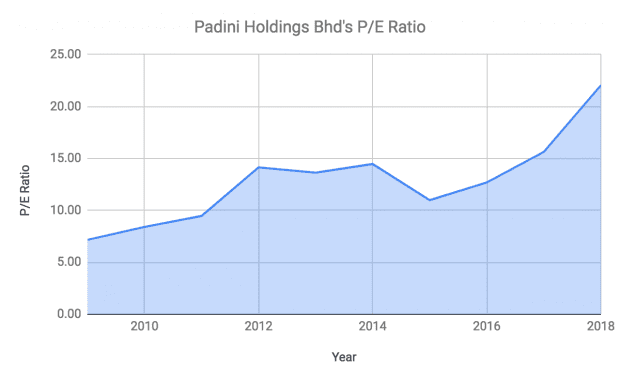 12. PEG ratio — Some investors think it’s okay to buy stocks with high P/Es if they continue to grow fast in years to come. To consider this, we can calculate the PEG ratio to determine Padini’s valuation in relation to its P/E ratio and earnings growth rate. The PEG ratio is calculated by the stock’s P/E ratio divided by its earnings growth rate. If a stock’s PEG ratio is below 1.0, it is considered undervalued and vice versa. In Point 6, Padini has a CAGR of 15.28% in earnings over the past 10 years. Based on this, Padini’s PEG ratio is 1.39 — an overvaluation at current prices. 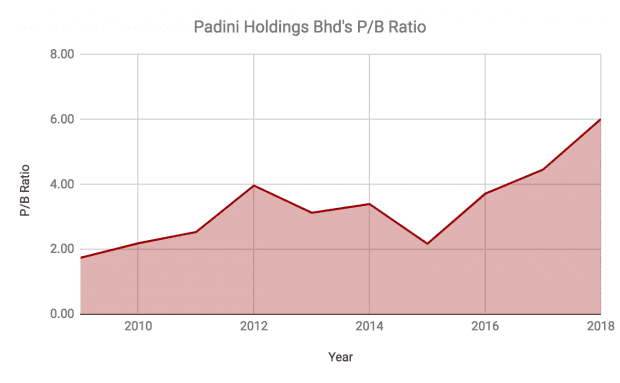 Padini has built a proven track record of growing revenue, profits, and dividends over the past 10 years. As a result, its stock price has grown tremendously with market capitalization increasing more than tenfold in a decade from RM355 million in 2009 to RM3.7 billion in 2018. The management has briefly revealed its immediate plans to grow in 2019 while also being candid about its challenges faced moving forward.

From an investor’s point of view, Padini’s stock price looks expensive as its PEG ratio is above 1.0 and close to its historical highs in P/E and P/B. In this case, I would keep Padini on my watchlist and wait for a better time to consider its stock.