Padini is one of the many homegrown success stories from Malaysia. It all started with Mr. Yong Pang Chaun in the 1960s. He worked for a textile merchant in Singapore as soon as he finished secondary school. A few years later, in 1971, Yong returned to Malaysia and set up his enterprise known as Hwayo Garments Manufacturing Company. It was a sole proprietorship that manufactured ladies’ garments. From there, Yong established the Padini brand in 1975, Vincci in 1981, Miki in 1987, and Seed in 1990. Subsequently, he listed Padini Holdings Berhad on Bursa Malaysia in 1998. At that time, Malaysia was in the midst of the Asian Financial Crisis when the KL Composite Index lost more than 70% of its value.

However, Yong was resilient. He navigated the storms and steered Padini to greater heights. Today, Padini can be found in over 330 locations in 16 countries across Asia and is one Malaysia’s top 30 most valuable brands. In this article, I’ll bring a detailed account of Padini’s success thus far, the challenges it faces, and its outlook for the future. Here are the 13 things you need to know about Padini Holdings Berhad before you invest.

1. Yee Fong Hung is the main revenue contributor of Padini Holdings, accounting 36.4% of group revenues in 2017. This subsidiary sells garments through a network of Brands Outlet stores across Malaysia. Beginning with its first store in 2006, YFH has a total of 47 Brands Outlet stores in 2017. YFH’s revenues have grown from RM12.9 million in 2007 to RM572.4 million in 2017. It is the fastest growing subsidiary of Padini Holdings Berhad. 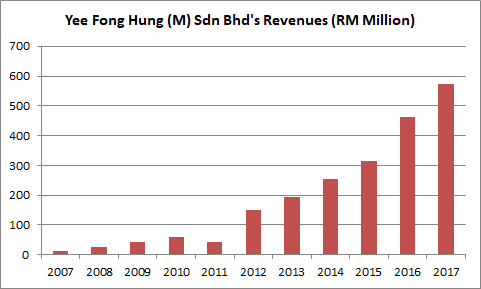 2. Padini Corporation is the second largest revenue contributor of Padini Holdings, accounting 33.3% of group revenues in 2017. Its roots can be traced back to 1975 when Yong established Padini as its pioneer brand. Overall, Padini Corporation has grown its revenues from RM103.6 million in 2007 to RM523.8 million in 2017. It is presently the second fastest growing subsidiary of Padini Holdings Berhad. 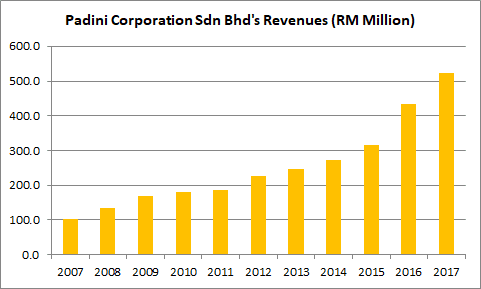 3. Vincci Ladies Specialties is the third largest revenue contributor of Padini Holdings Berhad, accounting 17.2% of group revenues in 2017. Presently, it sells garments and accessories under the Vincci brand in Malaysia through free-standing stores and through franchise stores in Southeast Asia and the Middle East. Overall, Vincci has grown its revenues from RM121.0 million in 2007 to RM270.6 million in 2017. 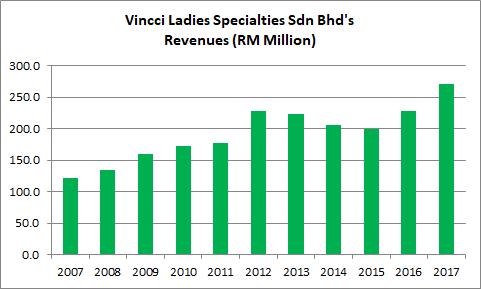 4. SEED Corporation is the fourth largest revenue contributor of Padini Holdings Berhad, accounting 9.8% of group revenues in 2017. It sells garments under the SEED brand mainly through consignment counters. Overall, this subsidiary has grown its revenues from RM58.9 million in 2007 to RM153.7 million in 2017. 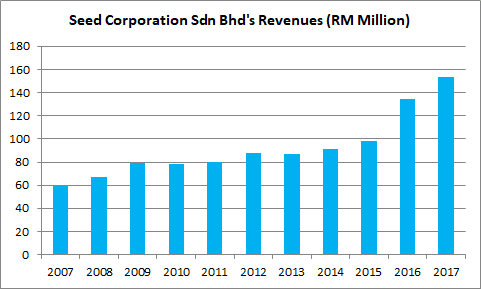 5. Mikihouse Children’s Wear is the smallest revenue contributor of Padini Holdings Berhad, accounting 3.1% of group revenues in 2017. It sells children’s garments and accessories under the Miki brand through consignment counters. The subsidiary has grown its revenues from RM11.2 million in 2007 to RM49.3 million in 2017. 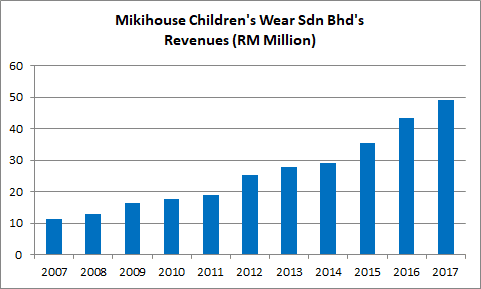 6. Overall, Padini Holdings Berhad has achieved a CAGR of 17.4% in group revenues over the last 10 years, from RM316.9 million in 2007 to RM1.57 billion in 2017. The growth is directly attributed to continuous sales growth achieved by its subsidiaries during the 10-year period. 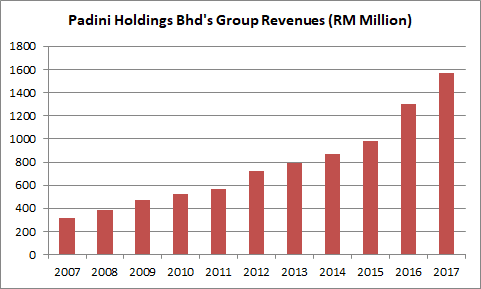 7. Padini Holdings Berhad achieved a CAGR of 17.5% in shareholders’ earnings over the last 10 years, from RM31.4 million in 2007 to RM157.4 million in 2017. This is in tandem with its sales growth during the 10-year period. The exception was from 2012 to 2015 when earnings dropped marginally from RM95.3 million to RM80.2 million. The decline was due to a slight trim in profit margins during the period. 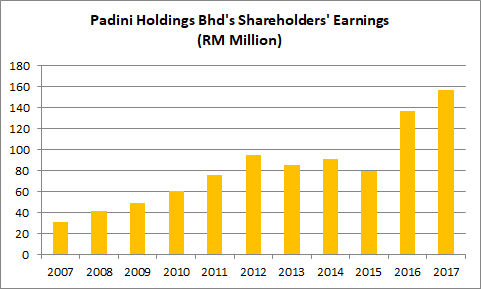 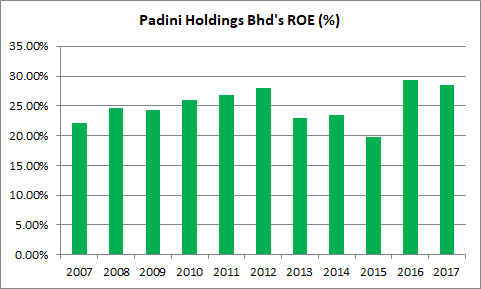 Calculated based on figures from Padini Holdings Berhad’s Annual Report 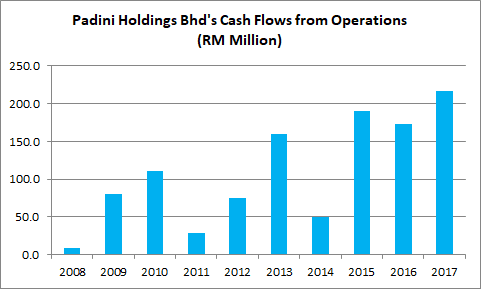 Padini is a cash-producing business and doesn’t need to continually raise equity or debt to expand its business and reward its shareholders with dividends. As at 30 June 2017, Padini has RM416.9 million in cash reserves and very low debt-to-equity ratio of 0.03. 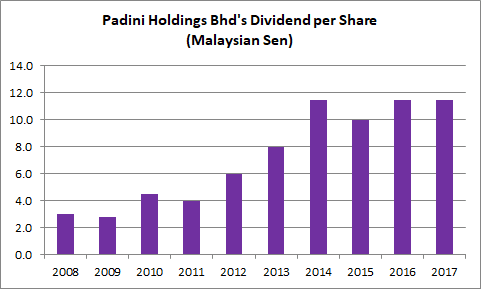 11. Padini Holdings Berhad is exposed to risks related to the fashion retail industry. Competition is intense with the recent entrance of foreign brands such as Uniqlo, H&M, Zara, and Marks & Spencer. Thus, the continuous success of the company is dependent on the management’s ability to analyse fashion trends and react quickly to changes in consumer tastes. Its failure would result in higher inventory losses as fashion items become obsolete.

12. Padini Holdings set up Padini Dot Com Sdn Bhd to embrace the rise of internet retailing. Padini.com is Padini’s official e-commerce site which caters to customers who prefer to shop online. Andrew Yong, son of Padini’s founder Yong Pang Chaun, is a computer science graduate who joined Padini in 2008 as its IT manager. Presently, Andrew is an executive director of Padini Holdings Berhad and is in charge of managing all IT assets owned by the company.

13. Looking ahead, Padini intends to expand its retail network whenever good opportunities are presented. This includes the planned opening of six Padini Concept stores and six Brands Outlet stores in 2018. The management also intends to carry out refurbishments for at least one Padini Concept store and three Brands Outlet stores. In addition, the management has completed the incorporation of Padini (Cambodia) Co. Ltd on 2 August 2017. It intends to open new stores to sell apparels, shoes and accessories in Cambodia in the near future.

In summary, Padini Holdings has built a track record of increasing sales, profits and dividends to its shareholders over the last decade. With abundant cash reserves and a low debt-to-equity ratio, the company is in position to ride through economic uncertainties, remain competitive in the ever changing and evolving fashion retail industry.