Parkway Life REIT (PLife REIT) was listed on the SGX on 23 August 2007. It owns a portfolio of income-producing healthcare properties located in Singapore, Japan, and Malaysia. Presently, it is one of Asia’s largest listed healthcare REITs with a portfolio value of S$1.75 billion.

In this article, I’ll bring an overview of PLife REIT’s performance since IPO, a segmental breakdown, and its near-term growth prospects. Here are 13 things you need to know about Parkway Life REIT before you invest.

1. PLife REIT has a portfolio of three world-class private hospitals located in Singapore: they are Mount Elizabeth Hospital, Gleneagles Hospital, and Parkway East Hospital. The three properties have been the main contributors to income to PLife REIT since its IPO in 2007. PLife REIT derives long-term income from leasing these hospitals to Parkway Hospitals Singapore Pte Ltd. The terms of these leases are set at 15 years with an option to renew for another 15 years under a triple net lease arrangement. It means, PLife REIT will not incur expenses such as property tax, insurance, and operating expenses for the three hospitals mentioned above.

2. In 2012, PLife REIT acquired strata-titled units at Gleneagles Intan Medical Centre in Kuala Lumpur for S$6.38 million. It consists of three ground floor units, three medical consulting suites located at the second and seventh floors, the entire eighth floor and 69 car park lots which accounts for 23.1% of the entire property. Excluding the car park, the property had an occupancy rate of 94% in 2017 with tenants such as Gleneagles Kuala Lumpur, Choizes Concept Store Sdn Bhd, and KL Stroke & Neuro Clinic Sdn Bhd.

3. PLife REIT has achieved a CAGR of 3.59% in revenues derived from its hospital properties in Singapore and Malaysia. It has grown from S$48.7 million in 2008 to S$66.9 million in 2017. This is contributed by having a favourable lease structure for its Singapore hospitals. The formula comprises a yearly rent revision based on the annual growth of the consumer price index (CPI) + 1%. If CPI growth is zero or negative, PLife REIT is still guaranteed a minimum of 1% growth in rent every year. 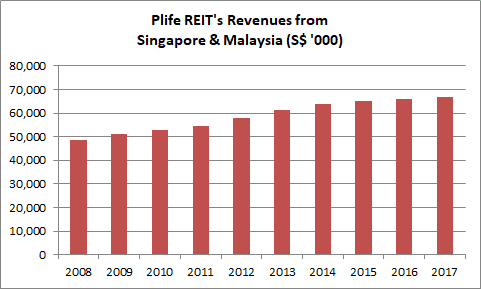 4. Japan has been a key growth driver for PLife REIT. The REIT first ventured into Japan in 2008 and has been active in expanding its portfolio of healthcare assets since. From 10 private nursing homes in 2008, PLife REIT has grown its portfolio in Japan to 44 private nursing homes and a pharmaceutical product distribution and manufacturing facility. Most of these 45 properties have a long-term lease structure with downside protection and provide stable income to PLife REIT. Overall, PLife REIT has achieved a CAGR of 26.41% in revenues from Japan, from S$5.2 million in 2008 to S$43.0 million in 2017. 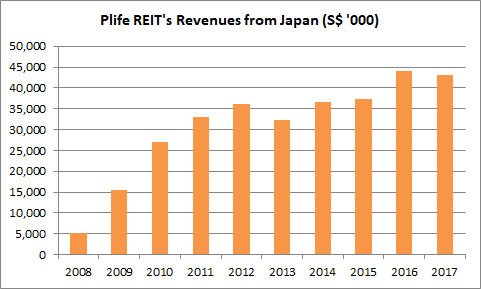 5. PLife REIT has achieved a CAGR of 5.70% in the valuation of investment properties over the last 10 years. It expanded its portfolio from 13 properties worth S$1.05 billion in 2008 to 49 properties valued at S$1.73 billion in 2017. This is attributable to steady capital appreciation achieved by its Singapore hospitals and continuous investments in private nursing homes in Japan over the last decade. 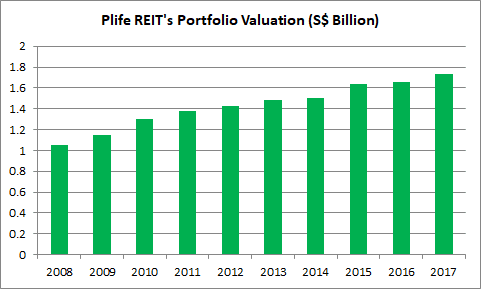 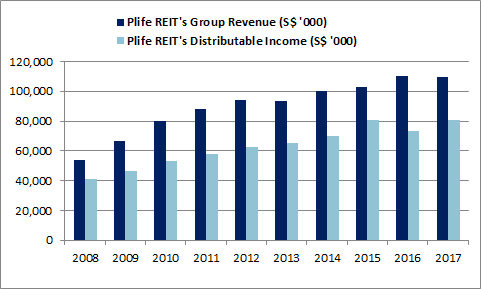 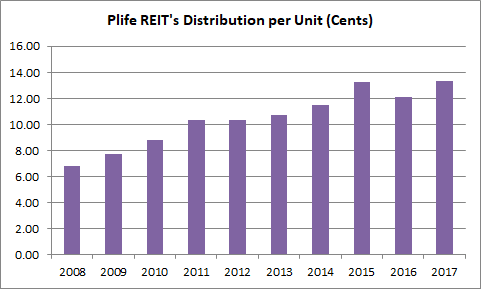 8. As at 31 March 2018, PLife REIT has total borrowings of S$687.0 million. Its current effective all-in cost of debt is 0.99%. PLife REIT has an interest cover ratio of 13.2, indicating that it is able to pay its interest costs easily. Its gearing ratio works out to 38.0% which is within the 45% limit allowed by the MAS. PLife REIT has a debt headroom of S$231.5 million before hitting the regulatory limit. This provides PLife REIT the option to borrow as a way to fund new acquisitions for future growth.

10. On 7 February 2018, PLife REIT acquired a nursing rehabilitation facility in Japan, Konosu Nursing Home Kyoseien, for a sum of ¥1.5 billion (S$17.8 million). It is a sale-and-leaseback agreement where the property will be leased back to its vendor, Iryouhoujin Shadan Kuoaikai, for ¥112 million (S$1.33 million) annually for a period of 20 years. With this, PLife REIT has enlarged its portfolio to 50 healthcare properties that are altogether valued at S$1.75 billion.

11. In Q1 2018, PLife REIT announced the completion of two asset enhancement initiatives at Ocean View Shonan Arasaki. It cost ¥26.0 million (S$320,000) and the renovated properties have started to contribute higher rent from 1 March 2018.

12. PLife REIT remains committed to grow its portfolio in Japan to ride on the country’s buoyant healthcare sector. Based on findings from the OECD, Japan spends around 10.9% of its GDP on healthcare and is one of the largest healthcare spenders as a share of GDP in the OECD. Japan’s population is ageing fast as the proportion of its population over the age of 65 is estimated to reach around 30% by 2021. Hence, this would further increase the demand for aged care facilities in Japan which bodes well for healthcare properties in the country.

13. Khazanah Nasional Berhad is the largest shareholder of PLife REIT. As at 1 March 2018, it holds a 35.69% indirect stake held through IHH Healthcare Berhad, a dual-listed healthcare operator in Malaysia and Singapore which is currently the master tenant of PLife REIT’s three hospital properties in Singapore, and a 100% stake in Parkway Holdings Limited, the sponsor of PLife REIT. IHH owns a network of 50 hospitals across 10 nations including Singapore, Malaysia, India, and Turkey, and provides a pipeline for potential acquisitions for PLife REIT.

PLife REIT has built a track record of delivering steady growth in both gross revenue and distributable income over the last 10 years. Moving forward, the REIT has laid a firm foundation for sustainable growth in the future as it enjoys favourable lease arrangements which have long lease tenures, guaranteed increments in rent, and downside protection.

Due to its merits, PLife REIT’s share price has risen strongly over the last 10 years and its distribution yield of 4.9% is among the lowest from the pool of 39 REITs listed in Singapore. As I write, the yield from Singapore REITs ranges between 4.5% to 9.0%. (For more financial ratios and details about Singapore REITs, please feel free to check out Singapore REIT Data.)