Pavilion REIT (PAVREIT) is the largest retail-focused REIT in Malaysia. As at 30 June 2018, its portfolio is valued at RM6.29 billion. In this article, I’ll be covering the performance of PAVREIT’s individual properties, its overall financial results, and discuss its ability to grow its income distributions in the near future.

Here are 12 things to know about Pavilion REIT before you invest: 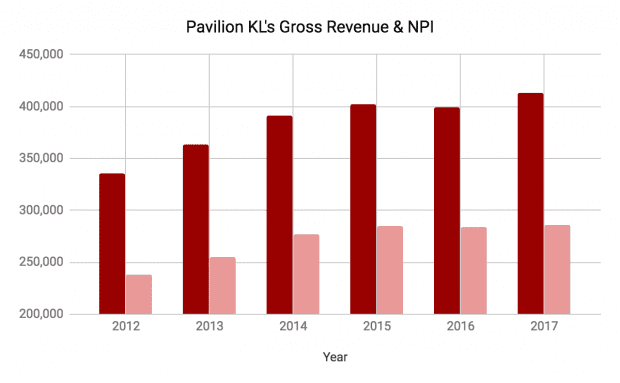 2. Pavilion Tower is a leasehold 20-storey office building located adjacent to Pavilion KL Mall. It is valued at RM133 million and is the smallest property owned by PAVREIT. Its main tenants include Crabtree & Evelyn, Malton Group, Mrail International, and KL Metro. The office building has contributed a steady RM10-12 million in gross revenue and RM6-8 million in NPI over the last six years. 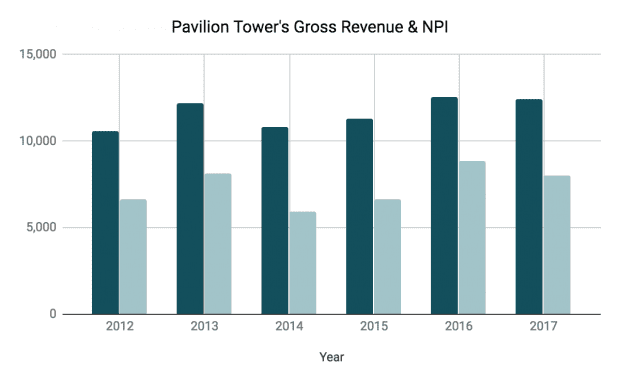 3. Intermark Mall is a freehold six-storey retail podium located at 348 Jalan Tun Razak, Kuala Lumpur. PAVREIT acquired the property for RM160 million in March 2016. Since then, PAVREIT’s management has successfully improved the mall’s occupancy rate from 67.9% as at 30 June 2016 to 92.2% as at 30 June 2018. Its key tenants include Jaya Grocer, MST Golf, and Hua Wei. Intermak Mall contributed its first full-year results in 2017 where it posted RM24.8 million in revenue and RM12.0 million in NPI. The mall was appraised at RM169 million as at 31 December 2018

4. Da Men Mall is a freehold five-storey retail mall located at Subang Jaya, a mature neighbourhood in the Klang Valley. PAVREIT acquired the property for RM488 million in March 2016. The mall maintained its occupancy rate at 85-90% in 2016-17 before falling to 79% as at 30 June 2018. Its main tenants include Jaya Grocer, Food Arcade, Al Hannan Events, and The Canteen. Da Men reported its first full full-year results in 2017 where it posted RM39.9 million in gross revenue and RM16.8 million in NPI. The mall, regrettably, recorded a decline in appraised value to RM416 million as at 31 December 2017. 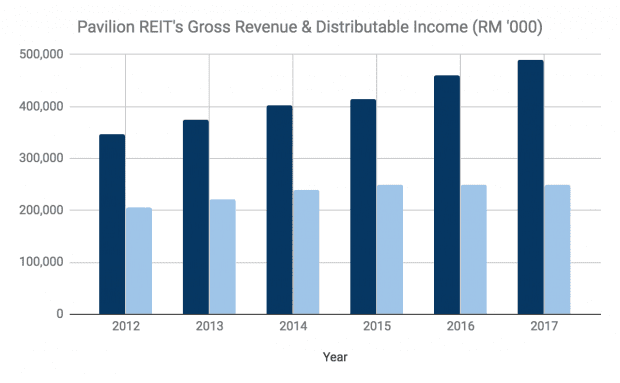 7. PAVREIT’s top 10 tenants account for 13.3% of its total gross rental income in 2017. Leases arising from its main tenants, however, will begin to expire in 2019 as shown below. Hence, PAVREITs near-term financial results are greatly dependent on the outcome of the management’s success in retaining its existing tenants and negotiating an upward rental reversion.

8. On 27 April 2018, Pavilion REIT completed the acquisition of Elite Pavilion Mall and its related assets for RM580 million. It is the REIT’s largest acquisition since IPO. As at Q2 2018, the mall recorded 96.2% in occupancy rate with main tenants such as JD Sports, King of Trainer, Muji, Mango and Mango Man, Toys R Us, and COS. For the 2-month period in Q2 2018, Elite Pavilion Mall generated RM11.9 million in gross revenue and RM3.7 million in NPI. We can expect to see a full-year contribution from the property in FY2019.

9. Pavilion REIT was granted rights of first refusal (ROFR) for fahrenheit88 mall, which is situated opposite Pavilion KL, by Makna Mujur Sdn Bhd. Also, PAVREIT was granted a general ROFR by Urusharta Cemerlang Sdn Bhd, its sponsor for future retail developments. The pipeline of ROFR properties will provide PAVREIT opportunities to grow its portfolio in the future.

10 .On 13 August 2018, PAVREIT announced that it accepted an invitation to participate in the ownership of an ongoing development comprising a five-storey retail mall – provisionally known as Pavilion Bukit Jalil. This mall is now being developed by the Malton Group and both parties are now entering into a non-disclosure agreement to commence due diligence, discussions, and terms and conditions. 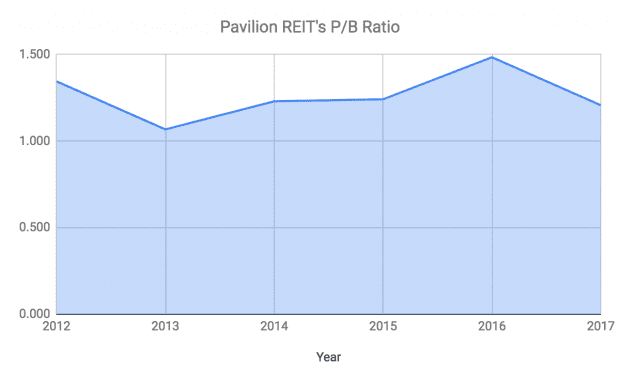 12. Dividend yield – PAVREIT’s DPU for financial year 2017 is 8.24 sen. Based on PAVREIT’s share price of RM1.63, its gross dividend yield is 5.05%, which is close to its six-year average of 5.06%. However, do note that you are investing as an individual (Malaysian, Singaporean, or other nationalities), you’ll incur a 10% withholding tax for DPU declared by Malaysian REITs. Thus, your net dividend yield from PAVREIT would work out to 4.6% after deducting withholding tax. 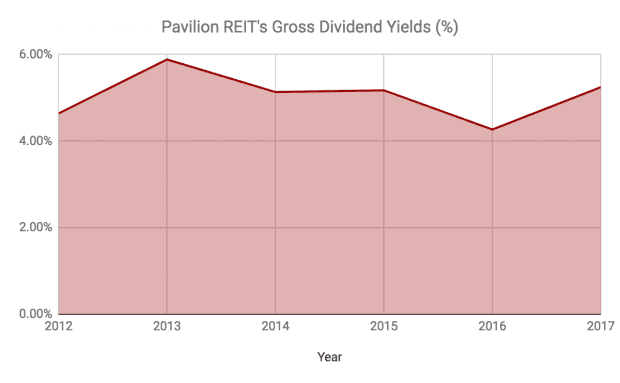 In conclusion, Pavilion REIT has built a track record of delivering growth in gross revenue, distributable income, and DPU to unitholders. Its recently acquired Elite Pavilion Mall has started to contribute financially and would be a key growth driver in the near future.

Based on its 2017 annual report, a significant number of leases of its top 10 tenants will expire in 2019. PAVREIT’s financial results would be negatively impacted if the management fails to retain its existing tenants or secure new tenants for in the coming year. On the flip side, it provides a chance for the REIT to negotiate for positive rental reversions for its expiring leases.

As calculated, PAVREIT’s current gross dividend yield is 5.05% which is at its six-year average. Based on this, PAVREIT can be considered fairly valued at the moment. As I write, the dividend yield of REITs listed in Malaysia and Singapore ranges between 4.5% to 8.0% per annum. If you wish to compare yields from over 60 REITs listed in both countries, please check out Malaysia REIT data and Singapore REIT data.