You may or may not have already heard that the U.S. treasury yield curve is at its flattest since 2007 – the year before the 2008/09 Global Financial Crisis. Is this a potential sign of things to come?

But before I delve into that, I guess a bit of background information is in order.

What is the yield curve?

Usually, interest rates for long-term bonds are higher than for short-term bonds. And rightly so because investors demand a higher yield for locking their money away for a longer period of time, which brings greater risk and uncertainty. In this case, the yield curve is ‘normal’ and slopes upward.

If long-term yields become even lower than short-term yields (which obviously doesn’t make sense in the long run), then the spread becomes negative and the yield curve is ‘inverted’ and slopes downward.

So what happens when the yield curve is inverted?

Historically whenever the yield curve becomes inverted, it is a strong signal that the U.S. is about to enter a recession. Have a look: 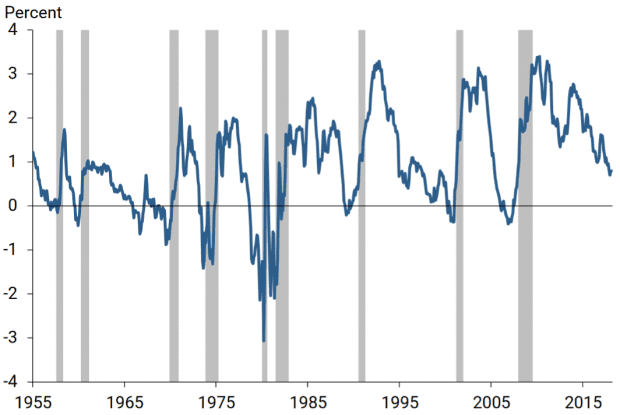 The chart above is the yield curve spread between the 10-year and one-year U.S. treasury yields from January 1955 to February 2018. The grey areas indicate periods of recession. As you can see, every U.S. recession in the past 60 years has been preceded by an inverted yield curve (i.e. the spread goes below zero). Amazing, really.

According to the Federal Reserve Bank of San Francisco economic letter:

“Every recession over this period was preceded by an inversion of the yield curve… and had only one false positive, in the mid-1960s, when an inversion was followed by an economic slowdown but not an official recession.”

And when the U.S. sneezes, the world catches a cold.

Why does an inverted yield curve signal a possible recession?

If investors are optimistic that economic growth will continue for the long term and expect interest rates to rise, many will prefer short-term bonds now (instead of long-term bonds) in hopes of securing a higher yield later. The lower demand for long-term bonds means long-term yields rise faster compared to short-term yields, widening the spread.

However, when investors start to become pessimistic about long-term growth and expect interest rates to fall in the future, many will now purchase long-term bonds to lock in yields before they fall. The higher demand for long-term bonds now leads to long-term yields slowing or falling, narrowing the spread.

Therefore, a narrow/negative yield curve spread may signal that long-term investor confidence in the economy may be waning, even though it may still be booming right now.

The fifth perspective – what next?

It’s also important to note that while the U.S. yield curve spread is at its lowest since 2007, it is not yet negative. Right now, the spread between the 10-year and one-year U.S. Treasury bonds is 0.5 percentage points.

And even if the yield curve inverts, it can’t predict when a recession will happen. The above study by the Federal Reserve Bank of San Francisco noted that a recession came in as little six months to as long as two years. So the music may go on playing for some time.

The U.S. has been on a tremendous nine-year economic bull run since the Global Financial Crisis. But every economic expansion is followed by a recession — we all know that.

The only question is… when?