Events that happen in the United States may seem far away and disconnected from our daily lives. However while the average Singaporean can safely ignore President Obama’s State of the Union Address to Congress on 20 January 2015, they should pay some attention to the Chair of the Federal Reserve, Janet Yellen.

This might appear counterintuitive given that Obama is the most powerful person on Earth and has more media exposure. However this article will show why we should pay more attention the Federal Open Market Committee, more commonly referred to FOMC. The FOMC is the main monetary policymaking body in the Federal Reserve (also known as Fed) and it is chaired by Yellen.

The FOMC controls the Federal Fund Rate and it is closely linked to the Singapore Interbank Offer Rate (SIBOR). For most Singaporeans, their home mortgage rates are floating rates after the fixed rates period expire and floating rates are commonly linked to the 3-month SIBOR with a mark up. When the Fed raises its rate, SIBOR rates will raise along with it resulting in higher monthly mortgage payments. Before we look at the details, let us look at the case for the Fed to raise its rates. 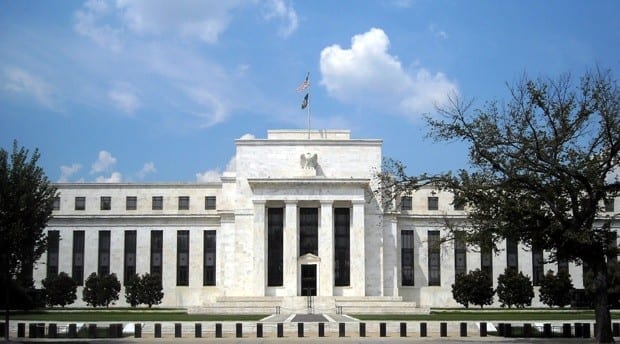 The Fed has the dual mandate of price stability and maximum employment together with a newly added mandate of financial stability entrusted upon it by the Dodd Frank Act in July 2010. The Fed has maintained extraordinarily low federal fund rates of 0.25% since December 2008 in the aftermath of Lehman Brothers collapse and the subsequent recession that gripped the world.

These low rates are artifical and they penalize low risk savers(ie retirees) to spur economic growth. Consider what the Vice Chair of the Federal Reserve Stanley Fischer has to say recently in December 2014 below:

“FISCHER: Well, we recognize — it’s not an accident that we call the increase in the interest rates, which Larry has kindly put off — off our agenda for the rest of the day — it’s not an accident we call it normalization. Zero interest rates are not normal. And operating with them is very difficult. So I think this is not normal. It creates certain difficulties. But what we have learned is that you can operate reasonably well in these circumstances, as the Fed did from 2008 until today.”

Stanley Fischer is the second most influential official in the Fed after Yellen so his words carries weight. When the dot-com bubble burst in 2000, the Fed under Alan Greenspan reversed the rate hike which saw Federal Fund Rates at 6.5% in May 2000.

In a series of gradual rate cut which was later known as Greenspan Put, the Fed cut interest rates to 6.00% on 03 January 2001 all the way to 1.00% on 25 June 2003 before rates went back up again on 30 June 2004. This prolonged period of low interest rates was blamed for the subsequent US housing bubble together with lax regulatory oversight.

Hence this is why Fischer, who is also a governor on the FOMC with voting rights, see that this low interest rates as ‘not normal’ and sees the need to normalize interest rates by increasing it and not allowing it to stay where it is. The Fed is aware that prolonged low interest rates can lead to the build-up of financial instability. 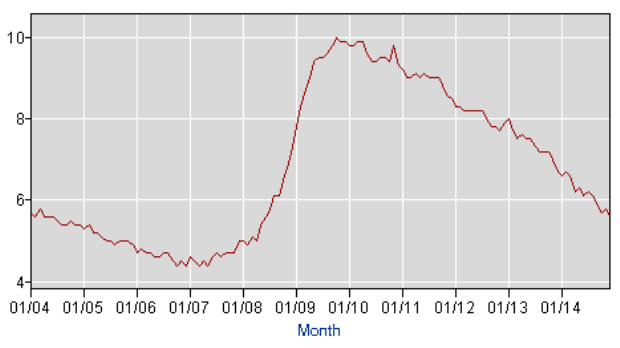 The chart above from the United States Department of Labour Statistics gives us a good visual understanding of the labour conditions before the crisis and the subsequent recovery. With the improving economy, the unemployment rate is expected to continue to dip to the long run unemployment rate.

The long run unemployment can only be gleamed from estimation. This is estimated to be from 5% to 6% according to the Fed. The FOMC has a narrower estimate of 5.2% to 5.5%. In a normal economy, there is bound to be some unemployment as people switch jobs, go back to school (such as MBA), retire early and normal restructuring. In other words, we can safely say that the Fed has fulfilled or is fast approaching its maximum employment mandate. 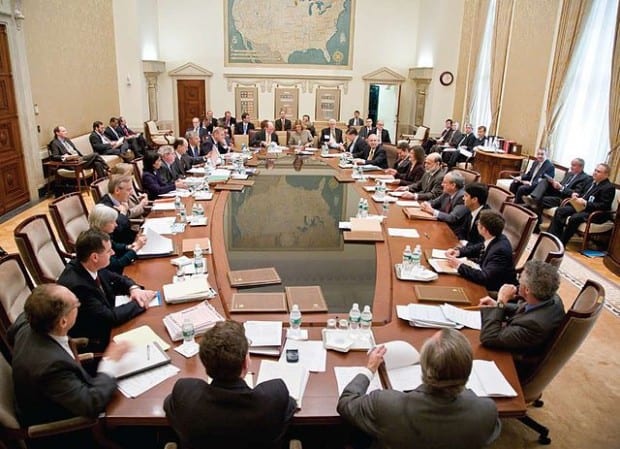 The latest FOMC Statement on 28 January 2015 recognized the progress made by the economy. The economy is described to have expanded on a ‘solid pace’ over the words ‘moderate’ in the previous meeting. This is in recognition of the 5% Gross Domestic Product (GDP) growth in the third quarter of 2014 which is at 11 years high.

The advance GDP growth for the fourth quarter was released on 30 January 2015 so it is not considered by the FOMC. It came in 2.6%, slightly lowered than the 3.0% expected by the market. However we should note that advance estimates are subjected to revision as they exclude data for December 2014.

The chart above shows that the US has strong quarterly growth since 2012 with only 1 quarter of contraction in the first quarter of 2014 due to poor weather conditions. GDP is the broadest measure of economic activity in the US and it is this strong performance that led the FOMC to describe the US growth as solid.

As far as employment is concerned, the FOMC has noted the strong job gains and low unemployment rate. It has also noted that underutilization of labour resources continue to diminish. In other words as the economy improves, businesses deal with the increased demand by hiring more workers with higher wages as the labor market gets tighter.

The recent FOMC also addressed the issue of low inflation rate. The official inflation target is 2% and the current annual inflation is at 0.8% for December 2014 as measured by the Consumer Price Index ((CPI)).

The CPI chart above shows the declining inflation or disinflation that is happening in the US. This is the only factor that might deter the FOMC from raising rates as it has the effect of dampening inflation further.

The FOMC response is beautifully summarized in the quote below: 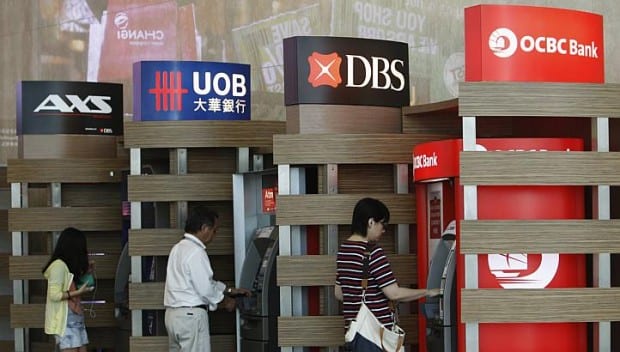 So now that we have made the case for the Fed to raise rates, the crucial question is the timing and pace. For pace, the market expects the Fed to lift rates gradually for the first time (also known as lift-off) in 7 years by 25 basis points or 0.25% to the range of 0.25% to 0.50%.

As for timing, I will refer to this quote by New York Federal Reserve President, William Dudley, who also serves as the FOMC Vice Chair on December 2014:

“Market expectations that lift-off will occur around mid-2015 seem reasonable to me.  Although that could change depending on how the economy evolves, my views on “when” do not differ appreciably from the most recent primary dealer and buy-side surveys undertaken by the New York Fed prior to the October FOMC meeting.”

So the market expectations is for the lift off to be in the June or July 2015 meeting and the lower than expected advance GDP reading is not likely to shake this view. So we are now back to the very point which concerns us in the first place and that is the SIBOR rates which determines our monthly floating rate mortgage payment.

The mountain of evidence presented above pointing to a possible rate hike in mid 2015 has already been digested by the market. Hence even before the Fed formally announced its rate hike, SIBOR has already started to creep up as seen in the 3-month SIBOR chart below. The 3-month SIBOR is the common benchmark used to price floating rate mortgage in Singapore. 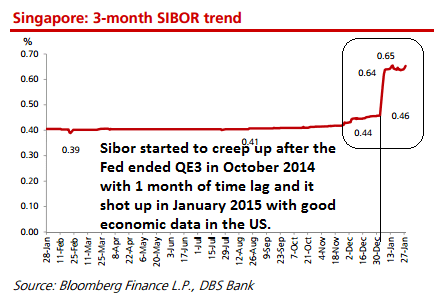 This is because as the market expects higher interest rates in the United States, international capital which left the US earlier due to low interest rates will start to flow back slowly and gradually. So when these funds enter in 2008, this result in lower mortgage payments. When they leave, there are lesser funds so there is a bid up in prices for the remaining funds. This happens with a time lag of 1-2 months but they will show up in the SIBOR and it is very hard to reverse.

In fact, Singaporeans should expect SIBOR to start climbing up steadily and prepare for more expensive monthly budget. This is unlike the Apple example where the SIBOR will come down after the Fed announces the first lift-off. The best case is that Sibor will be flat before raising again. The possible case is that SIBOR will accelerate even further.

How This Will Affect REITs in Singapore

Besides the obvious fact that Singaporeans should seek to refinance to a fixed rate mortgage now, they should also note that Real Estate Investment Trusts (REITs) will come under pressure.

While REITs would have sought to hedge their exposure against rising interest rates over a 1 to 3 year time frame when the Fed hinted to the world that they are going to taper their purchase of bonds under QE3 way back in June 2013, it is likely that these REITs are not able to fully hedge against it especially if they are expanding. This would mean that we should start to expect lower Distribution Per Unit (DPU) of 1%-3% for every 50 basis points increase in interest rates as a rule of thumb.

This would mean that REIT prices are likely to be pressured as only a lower price can make up for the reduced yield when dividends are expected to be cut in the near future. Another factor to consider for REIT is the upcoming Singapore Budget 2015 to be announced on 23 February 2015.

The big question for REITs now is whether they can keep their tax incentives that are expected to expire on 31 March 2015 if it is not extended further as this Asiaone news report shows. While the market is optimistic that the Singapore Government will respond favourably to the REITs request in order to keep Singapore’s pole position as the listing centre for REIT, we do not rule out any minor disappointments or surprise along the way.

While higher interest rates are going to be challenging for REIT management and we might see lower distributions, established and well managed REITs (such as Keppel and Suntec REIT) would have been through SIBOR rates above 3.50% back in 2007 would be able to survive and thrive especially if they have quality property in their portfolio.

That said, there are a wide variety of REITs with exposure to different types of properties (e.g. retail, industrial, hospitality, medical, etc.) for investors to select and there is likely to be one that will fit your risk profile and other investment criteria.

While Japan and Europe might be trying to fight deflation for their troubled economy, Singapore has a GDP growth of 1.6% for November 2014 and a very low unemployment rate of 1.9% for November 2014. This would mean that after this period of low energy prices end, Singapore will come out of the 0.2% annual deflation as of December 2014 back into inflation as its economy grows from strength to strength.

Over the long term, this property exposure in REITs will be a good inflation hedge and be a valuable part of your portfolio. In addition, REITs are a lot more liquid than property and will allow you to liquidate them at much lower cost and uncertainty when you have an urgent need for cash.