Established in 1968, Scientex Berhad has grown into a conglomerate which derives income from two core business segments. First, Scientex manufactures a wide range of plastic packaging products which it exports to clients located in more than 60 countries worldwide. Second, Scientex is a reputable property developer with a number of projects concentrated mainly in Johor, Malaysia.

For many years, Scientex has been a darling for growth investors. This is due to its impressive track record of delivering a strong set of financial results year after year which had led to a long-term appreciation in its stock price. As I write, Scientex is worth RM4.3 billion in market capitalization — around 31 times its market cap of RM135.7 million in 2009.

Recently, Scientex released its latest 2018 annual report. I took the liberty to go through it and, in this article, I’ll give an update on its performance over the last 10 years, its latest growth plans, and valuation metrics.

Here are 15 things to know about Scientex before investing:

1. In 2018, Scientex streamlined its manufacturing operations and recategorized its product range into three categories: stretch films, custom films, and specialty products. Presently, it runs 15 manufacturing facilities located in Malaysia, Vietnam, and the United States with a production capacity of 450,000 metric tons (MT) per year, up from 356,000 MT in 2017.

2. In the last 10 years, Scientex aggressively expanded its production capacity and product range through strategic acquisitions. In total, the company invested RM663.8 million in acquiring subsidiaries during the period. Here is a list of its major acquisitions:

3. Subsequently, Scientex embarked on an ambitious plan to increase the production capacity of its facilities that were owned by its newly-acquired subsidiaries, particularly over the last five years. In addition, Scientex set up two new facilities and increased its production capacity. Here is a list of projects that have been completed with operations commencing since 2016: 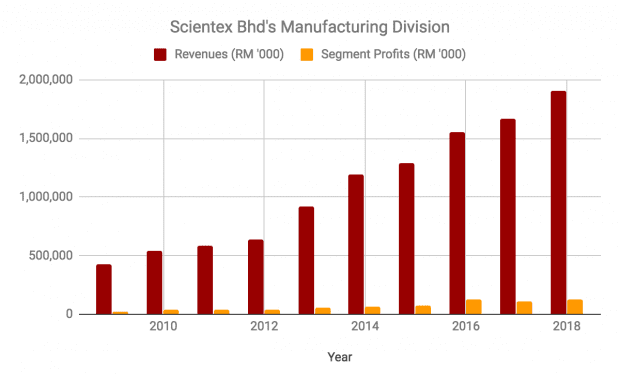 5. Scientex began its venture into property development in 1995 to diversify its sources of income. Since then, this division has built and delivered more than 17,000 affordable homes located primarily in Johor, Malaysia. For the last five years, Scientex has been actively growing it land bank as it envisions to deliver 50,000 affordable homes by year 2028. As I write, it has accumulated 3,265 acres of land in Johor, Melaka, Selangor, and Perak. Here is a list of development land which have been acquired by Scientex over the last three years, which would be developed over the next 10 years: 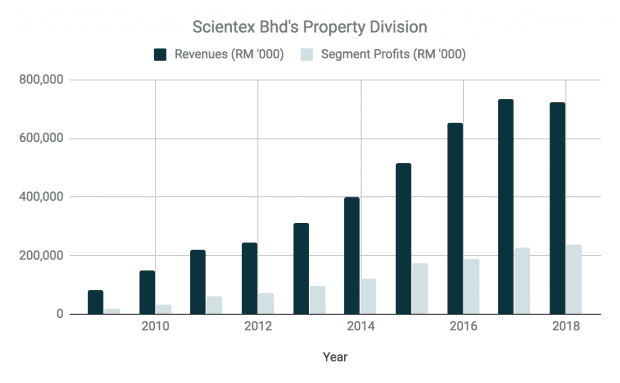 7. Scientex has achieved an impressive CAGR of 20.0% and 25.5% in revenue and shareholders’ earnings respectively over the last 10 years. Fromm 2009 to 2018, revenue increased from RM509.7 million to RM2.63 billion, and shareholders’ earnings grew from RM37.5 million to RM289.8 million. Profits have increased faster than sales because Scientex’s property segment — which has higher profit margins — has grown faster than its manufacturing segment during the period. Overall, Scientex has a 10-year average return on equity of 16.6%. 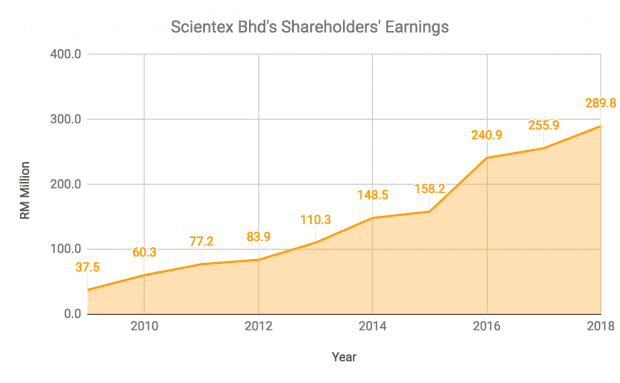 8. As at 31 July 2018, Scientex has long-term liabilities of RM405.7 million and a gearing ratio of 23.0%. Over the last 10 years, Scientex has generated RM1.97 billion in positive cash flows from operations and raised RM527.90 million in net long-term debt and equities. Out of which, the company has:

Evidently, Scientex has been efficient in generating cash flow from its business operation, using it to rapidly expand operations, and reward its investors with consistent dividends. 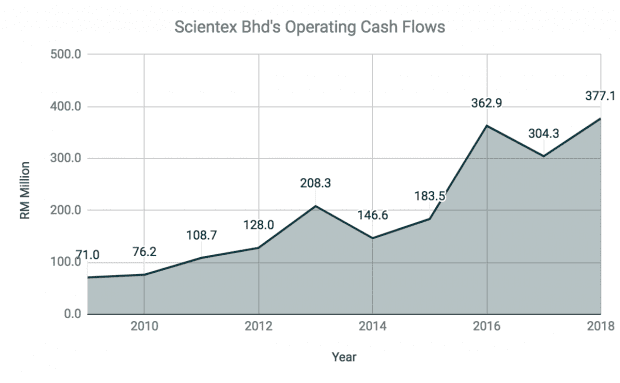 9. The first phase of a stretch film manufacturing plant in Phoenix, USA has been commissioned with a production capacity of 30,000 MT per annum. As I write, Scientex is working on Phase 2 of the project. It is expected to be completed by 2019 and will double its production capacity to 60,000 MT a year.

10. In 2 May 2018, Scientex completed its acquisition of Klang Hock Plastics Industries Sdn Bhd (KHPI). For the past three months, KHPI has generated RM96.6 million in revenue and RM5.69 million in shareholders’ earnings. KHPI will contribute its first full year of financial results in 2019.

11. On 15 August 2018, Scientex acquired two plots of freehold land measuring 208.9 acres in Alor Gajah, Melaka for RM68.2 million. They are located close to its existing Durian Tunggal development and are acquired with the intention of property development in the future. 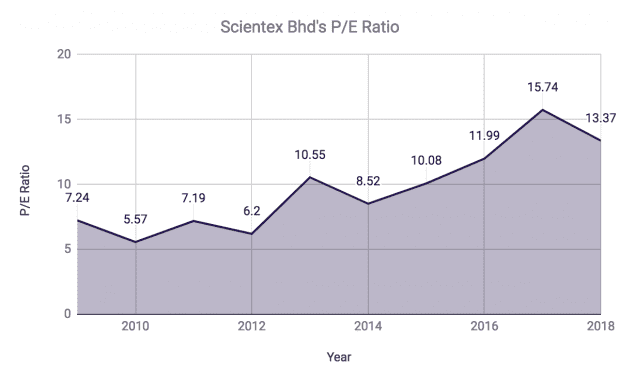 13. PEG ratio: In Point 7, I mentioned that Scientex has grown its earnings by 25.5% annually over the last 10 years. Hence, its current PEG ratio is 0.58. As it is below 1.0, the company is considered undervalued based on the PEG ratio. 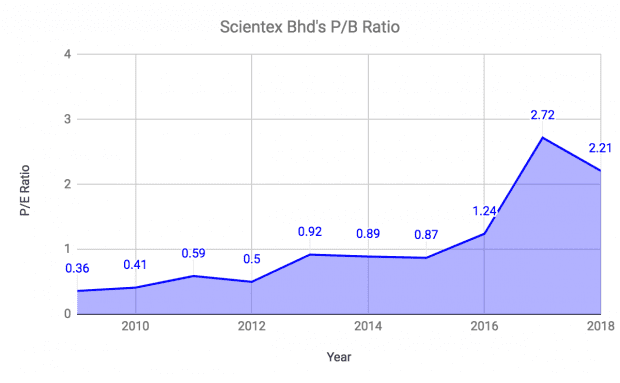 15. Dividend yield: In 2018, Scientex paid out RM0.20 in dividends per share. If Scientex maintains its dividend at RM0.20, its dividend yield is 2.26% based on its latest share price of RM8.84. This is lower than the 3% in fixed deposit rates offered by Malaysian banks presently.

Scientex has built a track record of solid growth over the last 10 years. As a result, its stock price has grown tremendously with its market capitalization growing 31 times in that period.