How do you know when stock investing has become a part of your life?

I can’t say for all. But, to me, if your mind is proactive in hunting for stock deals as you go about your day, then I suppose stock investing has become second nature to you.

For instance, yesterday, my mom asked me to grab a loaf of Gardenia bread before heading home. For most, Gardenia bread is just bread for breakfast or a light snack in the afternoon. To me, however, Gardenia bread is more than just food — it could potentially be an investment idea I could profit from. Instinctively, two stocks popped up in my mind that are associated with Gardenia bread:

In this article, I’ll touch on Scientex, a company that has achieved local success and is on track towards global expansion in the packaging industry. Besides wicket bags, Scientex is also a leading manufacturer of a wide range of packaging products in Malaysia. As I write, the company is worth RM4.13 billion in market capitalization.

Here are 13 things you need to know about Scientex Berhad before you invest.

2. Scientex’s industrial division is currently ranked as one of the world’s top producers of stretch films and also produces PP strapping bands, FIBC bags, woven bags, HDPE and raffia, and FFS bags. From 2012 to 2014, the company installed three nanotechnology stretch film lines which produce the world’s thinnest stretch film known as Nano6. Presently, Nano6 is marketed to customers mainly in Japan and Europe.

3. Scientex has achieved a CAGR of 12.19% in revenues from its manufacturing division over the last 10 years. It has grown from RM528.7 million in 2007 to RM1.67 billion in 2017. This was contributed by higher sales volume achieved as a result of acquisitions of major subsidiaries and expansion of production capacity from both the consumer and industrial divisions during the period. 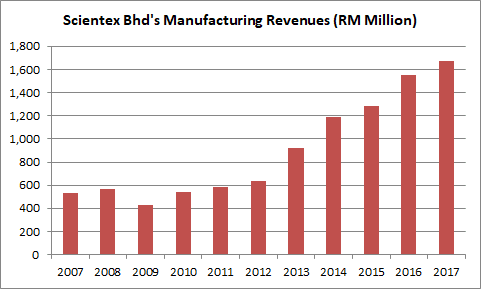 4. Scientex’s property development division is the second largest revenue contributor to the group. The company started its first property project in 1995. Ever since, despite its involvement in an entirely different industry, Scientex has established itself as one of the most reputable and leading property developers in Melaka and Johor. Overall, it has achieved a CAGR of 24.14% in property sales over the last 10 years. It has grown from RM84.4 million in 2007 to RM733.5 million in 2017. 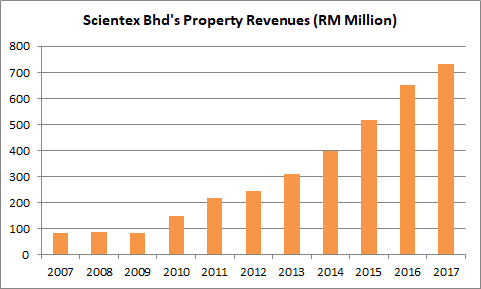 5. Overall, Scientex has achieved a CAGR of 14.64% in group revenues over the last 10 years. It has grown from RM613.1 million in 2007 to RM2.40 billion in 2017. This is contributed by continuous sales growth from both the manufacturing and property development divisions during the period. 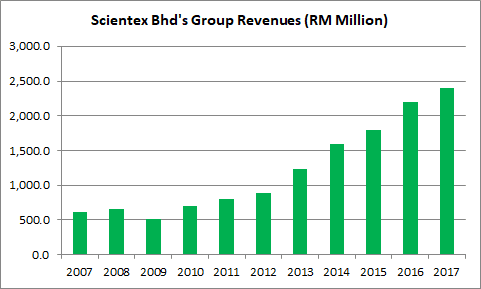 6. Scientex has achieved a CAGR of 21.95% in shareholders’ earnings over the last 10 years. It has grown from RM35.2 million in 2007 to RM255.9 million in 2017. Profit has grown faster than revenue due to improved margins from higher sales of better margin products particularly to foreign markets. 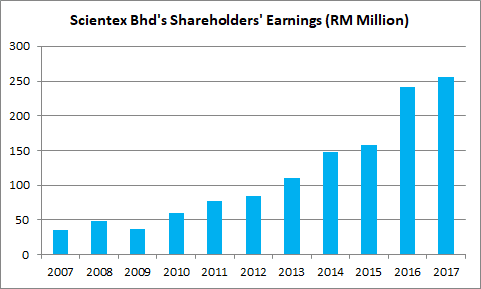 7. From 2008 to 2017, Scientex generated RM1.65 billion in cash flows from operations. In addition, it has raised RM369.6 million in net equities and net long-term borrowings. Out of which, it has:

This means that Scientex is in itself a cash-producing business and doesn’t need to continually raise equity or debt to expand its business or reward its shareholders with dividends. 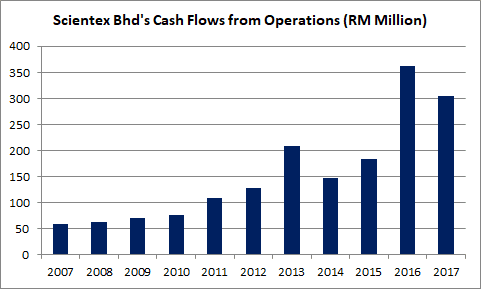 8. Since 2011, Scientex has had a dividend payout policy to pay at least 30% of earnings to shareholders in dividends. After adjusting for a 1-for-1 bonus issue made on 15 August 2016, it has grown its dividends per share (DPS) more than tenfold from 1.5 sen in 2007 to 16.0 sen in 2017. As at 11 April 2018, Scientex is trading at RM7.52 a share. If the company is able to maintain its DPS at 16.0 sen, its expected dividend yield is 2.1% — substantially below the 3% interest offered by local banks in Malaysia for fixed deposits. If you’re investing for dividends, you can probably find many stocks that offer a better yield. But if you are aiming for capital gains, then Scientex’s current P/E ratio of 13.18 and potential for future growth may be something you can consider. 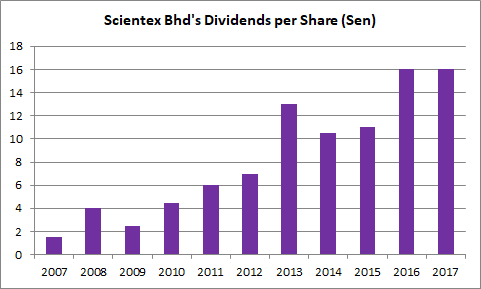 10. Scientex is also exposed to risks related to the local property industry. This includes credit financing, government policies on home ownership, labour shortages in the construction industry, and rising costs of construction materials.

11. On 10 November 2016, Scientex announced that it will invest US$25 million to set up a new stretch film manufacturing plant in Arizona, USA. This plant will house two stretch film production lines with an annual production capacity of 30,000 MT. The plant is targeted to be operational in early 2018. From there, the company aims to tap into new growth opportunities in North, Central and South America with estimated market size of 1 million MT per annum.

12. As at 31 July 2017, Scientex has accumulated unbilled property sales of RM500.0 million which is to be recognized over the next 2-3 years. These include two newly launched projects in Ipoh, Perak, namely Scientex Klebang and Scientex Meru 1. In financial year 2018, the company is targeting to launch approximately RM800.0 million worth of new developments.

13. On 9 August 2017, Scientex announced the acquisition of a piece of land in Rawang measuring 65.3 acres for RM85.4 million. Upon completion of this acquisition, Scientex would grow its land bank to over 2,700 acres and increase its gross development value for future launches to RM8.0 billion over the next 10 years.

In summary, Scientex has built a track record of growing sales, profits, and dividends to its shareholders over the last 10 years. As at 31 January 2018, it has RM158.7 million in cash reserves and a low debt-to-equity ratio of 0.15.

Moving forward, Scientex intends to build on its healthy balance sheet and decades-long proven track record to extend its footprint into new markets. This is evident in the manufacturing division seeking to increase its exposure in the U.S. market, while the property development division is expanding northward in Malaysia to Rawang, Selangor and Ipoh, Perak, away from its traditional markets of Johor and Melaka.