New year, new government (radical change, in fact) but same old way of looking at companies – searching for firms with wide economic moats. No matter how crazy Trump’s cabinet pickings will be, how radical his ideas for change may be, or how Russia might act, there will always be some that will be resilient to the noise.

Sometimes it’s not just companies that have moats, but entire industries. An example would be the payments network industry – Visa and Mastercard enjoy a virtual duopoly with very high barriers to entry. New entrants looking to compete in this industry must first comply with a myriad of financial regulations, then install expensive infrastructure and hope that financial institutions are willing to trust their payment flows with them, and then hope that merchants and consumers would bother to switch from Visa or Mastercard to them – relinquishing a ton of benefits for the new entrant’s promotions. It’s a tough industry to break into.

These CRAs were made notorious in the financial crisis – grading toxic subprime mortgage bonds as AAA as they were being paid to rate them by the banks. This, in turn, led to heavy scrutiny in the media and regulators, they even have a Wikipedia page dedicated to their role in the crisis. Despite the heavy fines and tightening regulations brought on by the Dodd-Frank Act, the CRAs still made tons of money and maintained their margins.

Political risk is by far the biggest risk in any industry, especially with oligopolistic structures or companies with monopolistic businesses like Alphabet (Google). The strength of the economic moat of the CRAs was tested by the US government and it remained solid.

CRAs derive their revenues from fees on issuing credit ratings on a variety of asset classes, of which fixed income takes a lion’s share of the pie. They usually classify it as their “ratings business”, with other segments grouped into “non-ratings business”. We will concentrate more on the ratings business as it’s still more significant to these companies.

In the United States, Moody’s, S&P and Fitch issue close to 95% of all ratings outstanding. Other CRAs take up the remaining 5% — A.M. Best, Egan-Jones, etc. In Europe, the number is nearly the same with the big three taking up nearly 90% market share.

A vast majority of ratings businesses come from bond issuances – a company raising a bond would usually head to a CRA to get its new bond rated. Institutional investors and retail investors alike with strict investment mandates would be prohibited to buy unrated bonds – this dynamic creates a cycle of demand for a rating by a CRA.

Countries which need their debt (sovereign debt) rated would naturally go to a CRA to get themselves rated. CRAs wield enormous power in which a ratings downgrade can sometimes cause market disruption and capital flight. One such example was the infamous downgrading of American sovereign debt from AAA to AA+ by S&P, causing political outcry and sending the markets into a tailspin. The reason is simple – borrowing costs would be higher when ratings are downgraded.

The CRA industry is exposed to economic cycles and investor mood – a recession or a slowdown would naturally lead to a sharp slowdown in transactional revenues, of which Moody’s is more exposed to than S&P.

This is where it gets controversial and is the very reason CRAs drew much flak from the public. An “issuer pays” model is where a bond issuer pays a CRA to rate its bond. As a for-profit organisation, it does make sense to give the issuer a good rating, if not they will simply give the business to another CRA who’s more… “flexible” in giving them a favourable rating. A simple example would be Lehman Brothers approaching Moody’s for a AAA-rating on a subprime bond. If Moody’s turns them down, they simply walk next door to S&P or Fitch.

This short video clip from the excellent movie The Big Short perfectly explains the “issuer pays” model that the CRAs employ.
Bond issuance

One key revenue driver for ratings agencies is global sovereign and bond issuance. Certain metrics can be easily found online, especially those in the United States. As of today, the U.S. bond market has an outstanding US$40.83 trillion in debt issued. 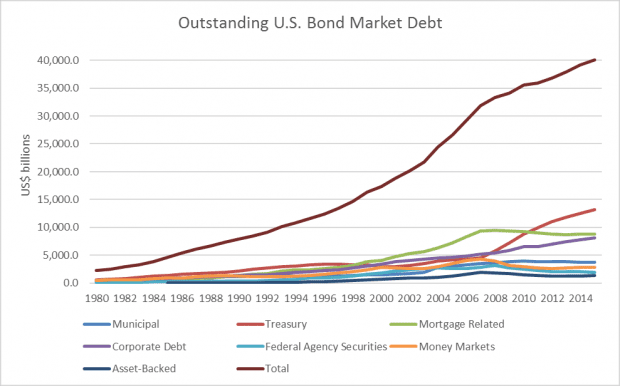 For the recent two years, bond issuance has been healthy, which explains Moody’s and S&P’s high earnings power. 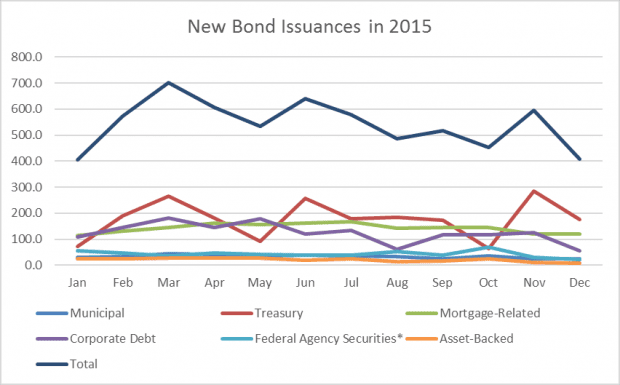 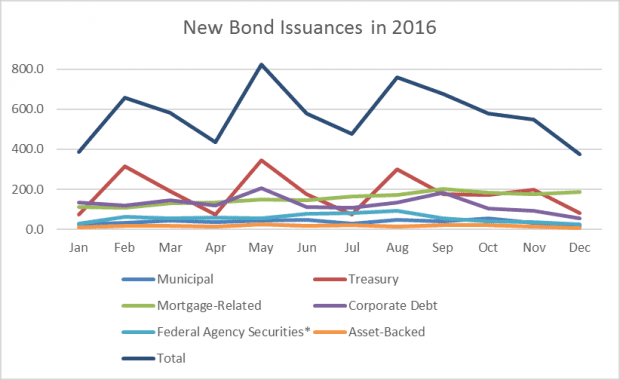 Another way to estimate future issuances of debt would be to look at banks’ quarterly earnings calls. Nearly every bank will be either giving guidance or providing a view of their business (especially investment banks). They make money by underwriting securities, so they are a good proxy for CRAs. Credit hedge funds (Apollo and Oaktree — both listed) give certain clues on market conditions, and sometimes even pundits on financial news can give clues on the bond market.

If you’re a data geek, there’s a deluge of data to be found online (or grabbed from the Bloomberg Terminal) including refinancing needs of sovereign and corporate debt. Calculate which years would see the heaviest need for refinancing of debt from a multitude of large corporations and you can roughly estimate with each CRA’s market share how much they would be earning from that year. Using Bloomberg’s debt screener, one can set maturity date as a parameter (set 2017, 2018, 2019 as separate data sets) to see exactly how much debt is due to mature, and possibly how much (estimated) refinancing they might need.

Difference between S&P and Moody’s

A short historical look at both companies show a typical oligopolistic industry with its incumbents earning high amounts of free cash flow, enjoying fat profit margins of at least 20%, and having high returns on assets:

For TTM 2016, Moody’s enjoys an outsized operating profit margin of 40%, with nearly 70% of its operating income being converted into free cash flow. Its P/E is higher than before due to higher expectations due to a stronger economy.

S&P had a rather lumpy history due to massive fines they had to pay for their role in the financial crisis. Still, their current earnings (TTM 2016) is to die for with a fat 52% operating profit margin and a fair PE ratio of just 17.

Moody’s has consistency in earnings and margins compared with S&P, but S&P’s recent efforts to rein in costs has seen its margins jumping higher. Moody’s and S&P’s costs are largely fixed, so any growth in earnings will flow through to its cash flow. As their business models require very little invested capital and minimum capital expenditures, both companies generate substantial free cash flow from which they reward shareholders with increasing dividends and aggressive share buybacks (combined at nearly 100% FCF), which explains the upward trajectory of both companies’ share prices.

The industry itself is incredibly “moaty” but the companies within it are not. Whatever Moody’s offers, S&P can offer the same. However, this isn’t a winner-takes-all market, unlike the social media industry. Many companies often get ratings from at least two issuers. Go to any blue-chip company’s website and look at the debtholder page; they often show ratings by all three CRAs — this explains Fitch commanding a reasonable market share in this industry.

The ratings business by Moody’s is called MIS (Moody’s Investor Service) and can be further split into these segments:

MIS has the biggest market share in structured finance – they rate a majority of commercial mortgage-backed securities products.

Moody’s non-ratings business is called MA (Moody’s Analytics), which comprises research, risk solutions and software licenses. Think of the Bloomberg terminal service or subscription fees you might have to pay for instant news from Dow Jones Wire; MA offers similar services. This segment is highly competitive with Bloomberg, Reuters and Markit as strong competitors (apart from S&P and Fitch).

Moody’s revenue mix is roughly 67% from MIS and 33% from MA. Moody’s derives roughly 58% of their revenue from the United States and the rest from other countries (consolidated). Their revenues are 50% recurring and 50% transactions-based. Recurring revenues is primarily made up of fees for monitoring of credit ratings and annual fees for certain pricing programs.

S&P Dow Jones Indices is an index provider with revenue from both non-subscription and subscription fees. Fees are earned from the management of ETFs (from underlying assets and funds), licensing fees on derivatives, and portfolio analytics fees.

Commodities & Commercial is a B2B platform connecting companies specialising in commodities and commercial markets. One well-known platform under C&C is Platts, which provides in-depth data and analytics in the commodities industry. J.D. Power is the other arm under C&C, providing consumer intelligence to businesses.

S&P derives 60% of their revenues from the United States and the remaining from international markets. S&P’s revenues are 61% recurring and 39% transactions.

With minimal maintenance capex to spend and a majority of costs fixed, the two CRAs earn outsized free cash flows even in the worst years. Asian companies typically spend more free cash flows on dividend distribution, but in the U.S., dividends are tax inefficient compared to buybacks, so American companies typically spend way more buying back shares. With a large amount of FCF generated every quarter, Moody’s and S&P spend an equal amount buying back shares and paying dividends:

Both CRAs are rapidly “eating” away at themselves at about a rate of 2% annually. That is the beauty of buybacks – reduction of equity base to enlarge shareholders’ ownership of the business. That is unlike a majority of Singaporean companies which do the opposite – diluting shareholders to no end.

These companies are great businesses, with Moody’s more levered to the US than S&P. I do have a question though – if S&P needs to raise debt, who do they go to and what kind of conversations they would have?