In light of our earlier article on Facebook, we now move on to another company that has a significant economic moat: Alphabet – the parent company of Google.

What is more powerful than having a brand inducted into the dictionary as a verb? Google has effectively monopolized the online advertising market, facing legal battles in Europe over its dominance in the market. Alphabet is perhaps one of the easiest companies to identify a moat due to its overarching dominance in its respective market.

Google has total dominance in search but in the broader technology industry they do have other impressive services and products. One such service is Android, with a substantial 51.04% (vs iOS’s 40.83%) of mobile operating system market share. Search is so important to Alphabet that it paid Apple US$1 billion just to keep its search bar on iPhone devices.

In short, one can assume that more than 51.04% of smartphone users use Google as their primary search engine. Google recognizes that and will do whatever it takes to keep it that way.

The technology industry also includes numerous sub-sectors such as virtual reality, the “sharing economy”, and social media, of which many firms have either dominating market share or are investing billions to secure a foothold within.

Facebook takes the cake in social media and Google with search, whilst Uber, Lyft, and Didi (Apple recently invested US$1b in China’s Uber) fight each other, other taxi companies, and governments to secure market share. Tesla fights the entire auto industry with its electric vehicles and governments to install EV infrastructure in cities; Airbnb competes with traditional hotels and hostels for market share.

Whether these companies succeed or fail is ultimately for time to decide. Whether their respective sectors have winner-takes-all dynamics like social media, or turn into highly commoditized areas with cut-throat competition like personal computers will also take time to tell.

The newest and perhaps most competitive sector in the technology industry now is cloud services with three tech giants investing immense sums to grab market share as the sector is growing at an exponential pace.  According to Forbes, worldwide spending on cloud services will grow at a 19.4% compound annual growth rate (CAGR) from nearly $70b in 2015 to more than $141b in 2019. This whets the appetites of tech giants Amazon, Microsoft and Google, who compete to grab a piece of this exploding market. Amazon is by far the biggest player with AWS (Amazon Web Services) taking up more market share than the next 14 providers combined.

Again, time will only tell if the cloud industry is one where the winner takes all and dominates the entire industry or reaches a point of saturation where profits are thin.

Alphabet is structured in a way that may seem complicated to most people but the easiest way to break it down to the layman is to think of it as two parts:

One is a monopoly business generating massive amounts of cash to fund its crazy, imaginative, innovative and often-failing cousins on the other side.

Sometimes these bets can pay off: Android, YouTube, Chrome, Maps. And many times, those bets simply fail: Boston Dynamics, Nest, Wave, Google+, and numerous others.

Larry Schmidt himself was quoted saying that Google celebrates its failures and it’s a right attitude to have as long as they can continue generating cash to fund their adventures. 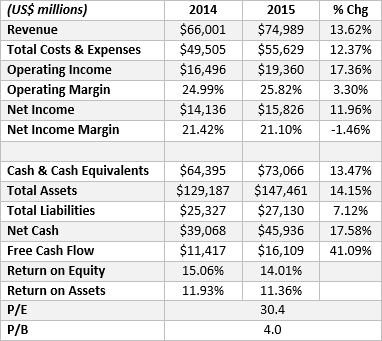 Typical numbers for “moaty” companies like Alphabet again: double digit profit margins, return on equity/assets with large inflows of cash. It’s pleasant to see one of the world’s largest companies at a market capitalization of roughly US$500 billion being a net cash company. Why borrow when your cash generating machine gives you billions in free cash flow every year?

However, do take note that with most American tech companies, a vast majority (60% for Alphabet) of their cash sits overseas (outside the US) and will NOT be taken back to the States due to the insanely high tax charges they’ll incur. You can discount their cash pile by 35% (the tax they’ll get slapped with) and then value the company over.

Compared to the S&P 500’s PE of 18.8, Alphabet’s P/E of 30 seems rich but with its earnings growing at such a fast pace, the market may have priced in that growth in its current valuation. Historically, Alphabet’s P/E ratio has mostly been trading above 20, perhaps a dip to the 20s would warrant a closer look at this amazing company.

Although Alphabet has no dividend policy, they have a share repurchase program, repurchasing US$2.1 billion in shares in the last quarter. Like Apple, this could be attractive to activists, who might enter and demand Alphabet start paying a dividend to reduce its cash bloat.

Alphabet’s Q1 2016 earnings saw revenues grow in the low 20s y-o-y and its Other Bets segment reported a loss of US$802 million. All is fine as long as Google’s engine hums along nicely but when there’s a hiccup in their earnings, as with all darlings of the market, Mr. Market doesn’t take too kindly to nasty surprises on hyped up stocks – Apple being the latest example having lost US$46 billion in market capitalization due to disappointing earnings. Apparently earning $10.5 billion in profits isn’t good enough. #stockmarketdarlingproblems

The annual I/O conference held by Google may not be as impressive or awe-inspiring in a “Steve Job-esque” way like Apple’s product launches but they do indicate the direction that Alphabet may go.

Unveiling Google Assistant and Google Home, Google’s push into the Internet of Things (IoT) isn’t actually new but they’re trying again. Augmenting machine-learning artificial intelligence (AI) to Google Home, Google hopes to harmonize smart-home devices that control anything and everything from refrigerators to TVs. Tech-savvy readers would already know by now that there won’t be a moat from this as they will be competing with Apple’s Siri, Microsoft’s Cortana and Amazon’s Alexa.

Google’s AI push has gained global fame due to DeepMind’s AlphaGo AI that won four games to one in a Go competition against world champion Lee Se-dol.

Machine learning is an incredible technology (and scary) that when harnessed effectively is be able to disrupt multiple industries and perhaps erase millions of jobs forever. Why keep a hundred workers on an expensive payroll when someone can automate the entire process for you at a fraction of the cost forever? This is a scary thought and Alphabet is one of many companies that are investing and pushing hard in this area. Our earlier article on Facebook has also touched a little on artificial intelligence and how Facebook is also investing millions and actively utilizing AI to ease communications and serve their users better.

Google intends to fight the WhatsApp/Messenger behemoths of Facebook with a new messaging app, Allo. I personally think that this will be a failure; it’s a winner-takes-all sector of social media communications and WhatsApp obviously dominates the industry with over a billion active users. Other apps can easily be created and replicated like Telegram, Cyberdust, WeChat, Line and Viber.

The only difference between Allo and all other current messaging apps is its augmentation of Google Assistant. Meaning, you can utilize’s Google’s AI to help analyze and research texts and pictures over Allo. Allo was able to identify an image of a dog as a Bernese mountain dog and use “volume control” wherein your texts are size-adjusted for whispers or shouts. AI-assisted auto-responses can either be a big home run for Google or a complete downer (like Apple’s autocorrect function).

Despite all the great things Alphabet has done and its innovative capabilities, is Alphabet worth investing in?

Alphabet’s moat is unquestionably large with Google’s domination in the online advertising space with Google Search, YouTube and Android. It is the most identifiable, easy to replicate business model but also paradoxically impossible to replicate due to Google’s branding and sheer size. As with all moaty companies, Alphabet’s financials is the envy of nearly all Fortune 500 CEOs with fat profit margins, immense cash flow, and no need for debt raising. This company would definitely be around for many years to come and perhaps play an even larger role in our lives as voracious consumers of data and constant need for instant results.

Like Facebook, many investors may not be able to stomach Alphabet’s ravenous appetite for moonshot projects with a very high likelihood for failure. Why bother spending so much on something so far-fetched when you can return the money to shareholders – in the billions? For the advancement of technology and human race, I’d say to Alphabet and all the other big tech companies with billions to spare: Go for it.

Shareholders in Alphabet, Facebook and Apple (if you bought early) have made tons of money, so it doesn’t mean that buying such daring companies that go on ventures that will meet fierce resistance in traditional industries is a bad idea. We as investors can always look elsewhere to make our money from unloved industries like utilities to speculating on Bitcoins. But those looking for companies with economic moats, this firm is an incredible example of having one.

Valuing tech companies can be tricky as it’s almost impossible to tell if any of their moonshot projects might take off and become the next Android. One way to keep pace of this rapidly changing industry is to have the discipline to track these companies’ product announcements, consumer reports on digital products, and start-ups that have insane, highly disruptive ideas that might pique the interest of people with deep pockets. The key driver of this industry is disruption: you either disrupt or get disrupted.