We’ve recently touched on companies with significant economic moats and they’ve mostly been technology companies. Now we turn our attention to a simpler industry (relative to tech firms) with a simple business model – the payment card industry and to be more specific, Visa (NYSE: V) and MasterCard (NYSE: MA).

Nearly everyone has heard of these two companies (thanks to the countless ads) and no cards are more widely accepted than these two. They are by no means a complete duopoly in the payment card industry as there are other competitors like American Express (NYSE:AXP), JCB, Discover, Diners and UnionPay. However, the numbers speak for itself:

Combined, Visa & MasterCard own 82% of the total market share. China’s UnionPay is a distant third at 13% and ahead of American Express at 7.3%.

Both Visa & MasterCard report excellent earnings with fat margins – typical of companies with huge moats – and are also owned by Berkshire Hathaway, although Buffett’s AXP position dwarfs his V & MA positions. Like I mentioned in my earlier article on Berkshire Hathaway: if these companies are so wonderful, why not own them all?

I do not consider American Express as a pure payment card play as they, like Discover, provide credit financing to customers thereby assuming credit risk which leads to unnecessary dents in earnings compared with Visa & MasterCard.

The payment card industry has a lot of room to grow: the world currently sees only 15% cashless transactions, which means there’s way more room to grow. Judging from Visa’s and MasterCard’s earnings and industry reports on the growth of cashless transactions, this industry will continue to expand as more countries develop their infrastructure, and a burgeoning middle class feel the need to go cashless as a safer and more convenient option.

Payments card companies act as toll booth operators. They collect fees on every transaction made whilst spending minimally on capital expenditures as most of their infrastructure is online and doesn’t need much maintenance except for security improvements.

Banks usually issue Visa or MasterCard credit and debit cards to consumers and consumers have no choice but to use either. Businesses keen to provide a cashless and convenient option for consumers would then see the popularity of both Visa & MasterCard and thus accept their cards for payments. It’s the network effect at work.

Visa and MasterCard then simply sit back, relax, and collect fees on transactions from the banks in the form of network participation fees, data processing fees (for transaction, clearing, and settlement) and foreign exchange fees (when consumers use a card in a foreign currency). This is what makes these companies relatively easy to understand. 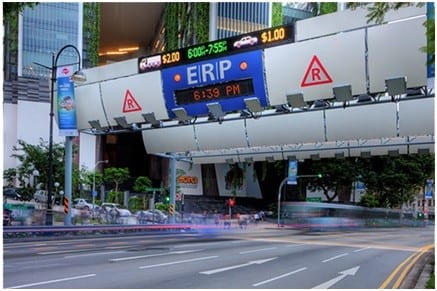 So when you think Visa or Mastercard, think of Singapore’s very own ERP. Easy to understand hor? Whole day just collect money only, sibei ho tan*. So owning these stocks is akin to perhaps owning your own personal ERP albeit on a global scale.

It’s understandable for big merchants like hotels and airlines to utilize V/MA for their transactions as they look for security, convenience for consumers, sophistication, and data-driven information processing in a cost-effective way. Thus only the big players can offer such platforms as they have the economies of scale and network in place. Smaller merchants are also driven toward using V/MA due to the widespread use of their cards and taking on the risk of an obscure payment service may not be economical for their business, in which case they’d rather stick to cash. The SME market for payments processing is however relatively untouched as many small businesses can’t afford to install equipment.

China’s ongoing economic game of smoke and mirrors with the rest of the world has proven successful in launching their own enterprises which have taken up significant market share domestically. UnionPay is a shining example of how China disrupts Visa and MasterCard’s dominance – China simply blocks their entrance into the country and allows their own companies enough time to copy the business model and gain consumer mindshare. The result? UnionPay’s global market share is now 13%, ahead of American Express.

So any talk of Visa or MasterCard’s potential entrance into the Chinese market should be met with a huge bucket a salt as there is already a monopoly in place with UnionPay and their entrance into China is still “unwelcome” till date.

The growth of a new technology is disrupting the payment card industry: the e-Wallet.

PayPal, Apple Pay, AliPay, WePay, TenPay, and numerous others have seen incredible growth rates in the use of their services, especially for PayPal (through Venmo). However, most e-wallets still integrate Visa and MasterCard systems to fund accounts, whilst they (the e-wallet services) then collect fees on transactions. It’s unclear if this sub-sector of the payments processing industry will eventually supplant the current hegemony enjoyed by V/MA but its insane growth warrants a closer look.

So how are the two players doing financially? As with all “moaty” companies again, the results should be fairly obvious by now: 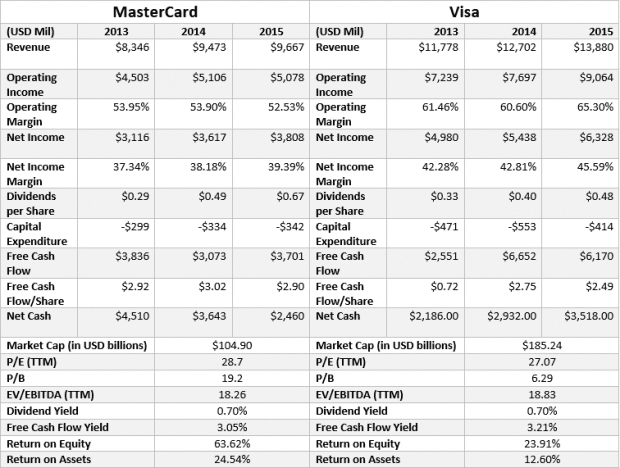 Both companies enjoy fat margins to the tune of 30-40% operating margins. During the past three years, they’ve both seen their margins widen and this is a very good sign that their business is doing really well and costs are being managed with prudence.

They both have positive free cash flow for the last ten years, weathering the 2009 financial crisis pretty well and have little need for capital spending. However, net income suffered during the crisis, reflecting the sharp drop in consumer spending globally.

These companies are basically mirroring each other in terms of relative valuation with nearly the same P/E and EV/EBITDA ratios. Their dividend yields are identical at 0.7% as well as free cash flow yields at 3%. Although their dividend yields seem paltry, its growth rate is fairly large (MasterCard doubled its dividend in three years) and both companies engage in billions worth of share buybacks, which is a more tax efficient way of managing cash in the States. The results?

MasterCard has lately taken on some long-term debt at US$3.287 billion, whilst Visa is still completely debt-free. This could explain the huge differential between the two companies’ return on equity and assets, although it seems like MasterCard has a better overall return on assets (double of Visa).

Recently, Visa announced to buy out Visa Europe for as much as US$23 billion which might put brakes to Visa’s upward march in its price. Once integrated as one entity, Visa would be able to reap the full benefits of the growth in cashless transactions in the world’s biggest economic union on top of their dominance in the world’s largest economy.

Both companies are impacted by foreign-exchange rates as they process payments globally but the recent FX volatility hasn’t adversely affected their earnings to the point of whining about it. Like Apple, forex volatility does affect business but if you’re protected by a wide economic moat and are seeing good growth in earnings, it shouldn’t be a pressing issue. Great companies and management do not blame the weather, forex volatility or Obamacare, they don’t have to.

These companies are probably good for long-term holdings if you believe that the payment card industry will remain undisrupted, and if more people adopt cashless transactions as a way forward. Nothing is a sure thing in this world but it’s always safer to invest in something you understand and are confident will remain in business for the long-term.

The risk of cashless transactions is always fraud. There are endless panic-inducing headlines of retailers being hacked and having the credit card details of millions of customers leaked. This could be the reason why people still stick to cash-based transactions (besides crime and money laundering, of course). Both companies have invested heavily in EMV chips and two-factor authentication to stave off the risk of credit card fraud, but as long as there’s money to be taken, there will always be people out there finding ways to steal it.

Visa and MasterCard have always traded at rich valuations and rightly so due to their high earnings growth rate, but at a P/E of 27, all it takes is one disappointing quarter to sending Mr. Market reeling and punishing the stock. Historically, both companies’ P/Es have been hammered to 16 back in 2010, so investors seeking a huge margin of safety might not like these wonderful companies at 27, but may love it below 20.