How often do you walk past a solid investment that puts money into your pocket year after year?

If you look around, you’d probably find many businesses that make their shareholders richer by the day. If you are struggling to find any, let me give you a hand. Ask yourself, ‘Where have you spent your money over the last 24 hours?’ I’m pretty sure these businesses are all around you and some of them are listed companies that will continue to deliver solid investment returns to shareholders.

Which leads us to our next question, ‘Then why aren’t people capitalizing on them if these great investments are all around us?’ I believe the answer lies in whether we have a set of ‘trained eyes’ to spot them. Let me illustrate.

Years ago, if you’d asked me about Sheng Siong, my reply would be it’s just a grocery store. I would walk past it without giving much thought unless I was thirsty and needed a canned drink. At that time, you could say that I had ‘untrained eyes’ as I was not able to spot an investment opportunity when it was right in front of me.

So recently, I decided to compile data on SGX-listed stocks. It was only then that a stock caught my attention: Sheng Siong Group Limited (SGX: OV8). As I write, Sheng Siong is one of Singapore’s largest retailers and is worth around S$1.5 billion in market capitalization.

With the data I gleaned, I now look at Sheng Siong with a different set of eyes. In this article, I’ll bring a detailed account of Sheng Siong Group’s achievements thus far, the challenges it faces, and its outlook in the immediate future.

Here are the 12 things you need to know about Sheng Siong Group before you invest.

1. As of 2017, Sheng Siong operates a chain of 44 grocery stores located across Singapore. It is an increase from 24 stores when it first listed on the SGX in 2011. These stores market a wide range of live, chilled, processed, packaged and preserved food products and other general merchandise including toiletries and household products. This includes over 900 products under 17 of its own house brands, an increase from over 300 products in 2011. 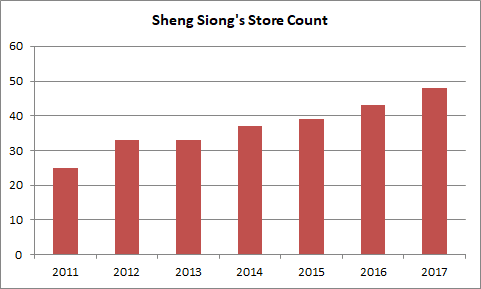 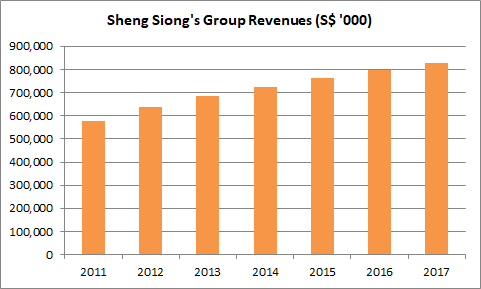 3. Sheng Siong has achieved a CAGR of 16.96% in shareholders’ earnings over the last six years, from S$27.3 million in 2011 to S$69.8 million in 2016. In addition to sales from new stores, Sheng Siong has improved its gross profit margins by lowering its cost of sales gradually during this five-year period. This is mainly due to receiving higher rebates from its suppliers from special promotions, volume discounts, displays, and bulk handling services. 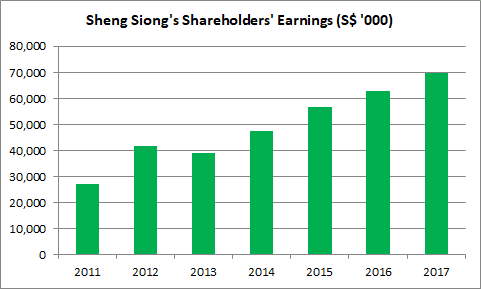 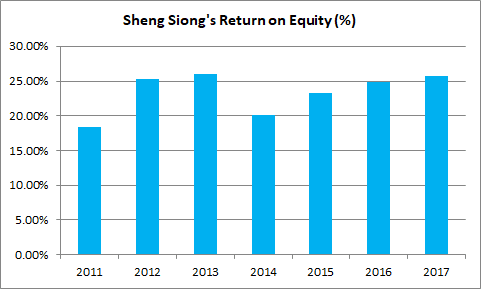 This means that Sheng Siong is in itself a cash-producing business and doesn’t need to continually raise equity or debt to expand its business or reward its shareholders with dividends. 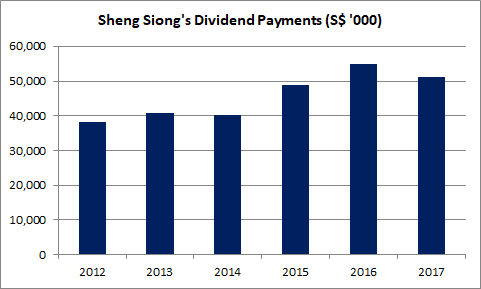 8. Sheng Siong is exposed to risks associated to breakdowns in power supply. This may result in spoilage of perishable food products such as chilled meat, frozen food, live seafood, and dairy products.

10. Sheng Siong is exposed to risks associated to its lease of retail space. This includes hikes in rental costs, failure to secure renewals of existing leases, failure to secure new leases in strategic locations, and termination of existing leases prior to their expiry. As such, Sheng Siong may be impacted by higher rental expenses and face disruption to existing business operations and its future expansion plans.

Sheng Siong has revealed the following events which could affect its financial results over the next 12 months. They include:

11. Sheng Siong has commenced the construction of a new extension to its distribution centre at 6 Mandai Link, Singapore. This project is expected to be completed before the end of 2018, adding as much as 97,000 square feet of storage space.

Since its IPO, Sheng Siong has delivered consistent growth in revenue, earnings, and dividend payments to shareholders. As at 31 March 2018, Sheng Siong reported S$78.6 million in cash reserves, a current ratio of 1.33 and no long-term debt.

With a healthy balance sheet, Sheng Siong intends to continue its efforts in expanding its retail space particularly in locations where it doesn’t have a presence yet in Singapore. Concurrently, it remains committed to nurture the growth of its new stores and to further enhance its profit margins by increasing its direct purchasing and bulk handling, and changing its sales mix to a higher proportion of fresh produce-based products.