Soilbuild Business Space REIT (SGX: SV3U) portfolio of properties include two business parks and nine industrial properties located around Singapore. The REIT has a total net lettable area of approximately 3.53 million square feet and a portfolio valuation of S$1.19 billion as at 31 December 2015.

So with the local economy slowing down and demand for industrial spaces falling, I attended Soilbuild Business Space REIT’s AGM to find out how the REIT plans to navigate the tough times ahead.

1. Steady growth in NPI and DPUI since its IPO

The REIT also has a policy of paying 100% of its distributable income to unitholders and as at 27 April 2016, Soilbuild REIT offers a yield of 8.9%.

Despite the good results thus far, both metrics fell in the latest 1Q 2016 results. According to chairman Chong Kie Cheong, the fall in NPI and DPU were due to lower occupancy rates in 1Q 2016. 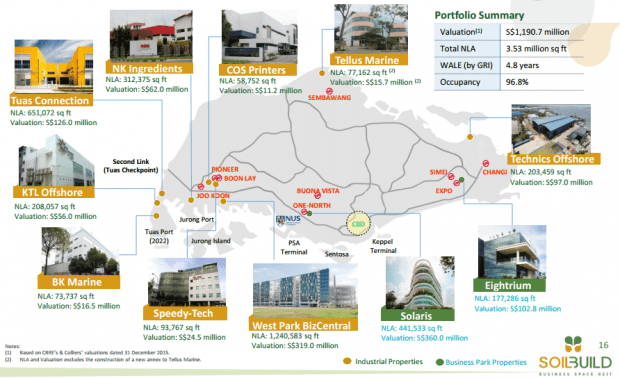 3. Soilbuild has first right of refusal for four more properties

Soildbuild REIT also has the first right of refusal for another four properties from its sponsor Soilbuild Group – Bukit Batok Connection, Waterfront, Waterview, and iPark. Bukit Batok Connection has already received its TOP while the rest are targeted for redevelopment from 2016 to 2018.

A unitholder asked if there was a deadline on the REIT’s first right of refusal on these four properties. The board revealed there isn’t one and they will only execute the deal when the time is right. CEO Roy Teo further elaborated that the current market isn’t good and you never know when the best time is to acquire a property. What the management will do is to look at every deal on a fair basis and, if the deal is beneficial, present it to unitholders for their support.

4. Growth in FY2015 revenue mainly due to acquisitions

Gross revenue increased 16.4% year-on-year to S$79.3 million. CEO Roy Teo stated that it was mainly due to the impact of the REIT’s acquisitions of Tellus Marine, KTL Offshore, and Speedty-Tech in 2014 and Technics Offshore in 2015.

5. Soilbuild REIT is looking to diversify its sources of debt

The REIT’s decision to issue $100 million medium-term notes in May 2015 and April this year was to diversify its sources of debt. The management doesn’t want to rely solely on banks, especially during difficult years. The MTN programmes have also allowed the REIT to refinance its existing debt and stretch its debt maturity up to 2021. At this point, Soilbuild REIT doesn’t have more than 43% of its total debt maturing in a single year. 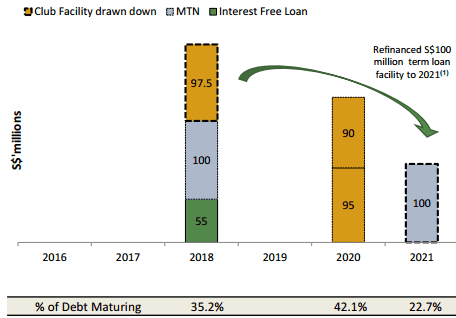 One unitholder raised a question about how the REIT was going to repay its debt. CFO Lim Hui Hua explained that REITs in general do not intend to repay the loan principal but instead look to refinance their loans from time to time. The reason is because the cost of borrowing is cheaper than the cost of equity. If a property is yield-accretive and its return is higher than the cost of debt, then it makes sense for the REIT to have some level of debt.

Another unitholder had a concern about Soilbuild REIT’s gearing ratio (which currently stands at 36%). The chairman replied that while Singapore REITs can borrow up 45% of total assets, the management has an internal policy of not going beyond 40% for its gearing ratio. He also stated that the REIT would not borrow too much during difficult periods like now.

One unitholder, highlighting figures from the REIT’s recent 1Q 2016 results, raised concerns about the lower occupancy rates in West Park BizCentral (92.3%) and, especially, Tuas Connection (86.3%). The CEO explained that Tuas Connection is a cluster of 15 industrial ‘bungalow’ units each meant for a single tenant. A vacancy in two units will equal a 13% drop in occupancy rate. On the flip side, if the management is able to lease two units, occupancy rates will jump 13% immediately. At the moment, the management is offering double commissions to agents in a bid to market the units more aggressively.

As for West Park BizCentral, the CEO said the asset is a huge property with over 1,240,583 sq ft in net lettable area. A drop in occupancy during a down-cycle like now is inevitable. 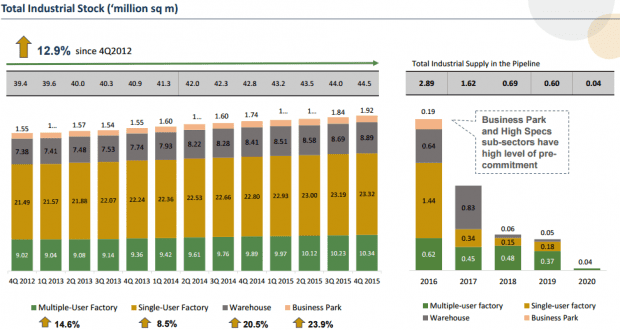 Soilbuild REIT’s business park assets are doing well at 100% occupancy rates. The CEO said this shouldn’t be affected moving forward as the supply of business park space is limited. Only 10% of the industrial supply in the pipeline this year are business parks and there is no business park supply coming on-stream in the next four years. MNC’s like Oracle have also chosen to house their premises inside business parks instead of office buildings in town.

Soilbuild REIT has a diversified tenant base comprising MNCs, SGX-listed companies and SMEs. 52% of NPI is contributed by master leases. CEO mentioned the master leases are longer term and have fixed annual rent escalations of 3% in 2017 and 2% in 2018. The REIT also collects 12 to 18-month rental deposits in banker’s guarantee for master leases compared to 3-5 months for single tenants. 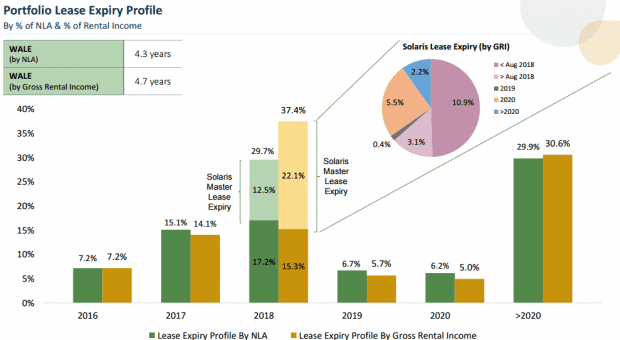 CEO Roy Teo also allayed fears about the high percentage of leases expiring in 2018. 22.1% of lease expiry that year belongs to the Solaris master lease. However, around one-third of Solaris’s lease expiry actually occurs beyond 2018. In effect, Soilbuild REIT’s lease expiry percentage in 2018 is inflated according to the CEO.

He further explained that even though these tenants are lumped under marine offshore and oil & gas, not all of them are directly in oil exploration – which is the hardest hit segment. He added that while some tenants will undeniably be affected, others have tweaked their business models in the midst of this oil crisis to survive the downturn.

The CEO also demonstrated that Soilbuild REIT would pass a stress test where even in the unlikely event that its entire marine offshore and oil & gas segment defaults, the REIT will still be able to meet its required financial covenants.

Finally, a unitholder questioned the management’s decision to raise funds through a private placement to acquire 72 Loyang Way last year. A private placement would have been acceptable if the acquisition contributed to higher DPU overall. However, DPU has since fallen and unitholders have also had their ownership diluted by the placement.

The unitholder went on to elaborate that the REIT’s gearing is already at 36% with limited headroom to borrow more. Therefore, any future acquisitions would most probably come from equity raising. He proposed, instead of a placement, the management conduct a rights issue where all unitholders could participate.

The chairman duly acknowledged his suggestion and said the board will do their best but gave no further details.