Economic data are always released with a slight time lag but it is useful for us to look at how the economy as a whole is performing. The Ministry of Trade and Industry (MTI) reported the growth figures for Singapore for the second quarter of 2015 recently: 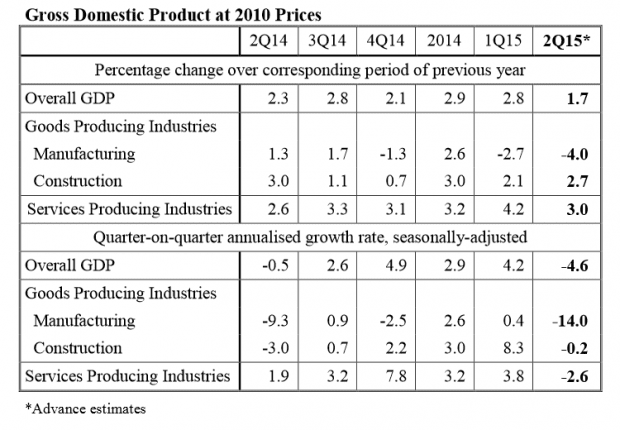 As you can see on the chart above, Singapore grew by 1.7% on an annualized basis compared to Q2/2014 but it shrunk by 4.6% on a quarterly based after a strong 4.2% growth in Q1/2015. In other words, Singapore’s growth in the first quarter was wiped out by the poor performance in the second quarter. This goes against economist expectations of a 0.8% quarterly growth for the quarter.

The only consolation is that the advance estimate and MTI might revise the growth higher next month when more data comes in. For example, the 28th South East Asian (SEA) Games are expected to increase the services contribution due to a surge in tourism. These numbers are not expected to have been fully factored in as it happened in the latter half of the second quarter.

Nevertheless it is important to know the reason behind the current weakness of our economy. Let us start with the most obvious hole in our economy: manufacturing. According to the MTI, the biomedical and transport sectors led the weakness of the manufacturing industry overall. Both are high-value industries which are highly volatile. The weakness in transport manufacturing came from the shipbuilding sector and this was due to strikes in the US west coast ports in the first quarter.

The US economy shrunk by 0.2% in the first quarter on the heels of a harsh winter and port strikes. The Singapore economy responded with a lag as the demand from the fourth quarter of 2014 still entered the order books in the first quarter. This is why the manufacturing sector still grew by 0.4% and the overall GDP grew by a healthy 4.2%. The US economy strengthened in the second quarter especially from May 2015 onwards as these adverse transitory influences waned. This strengthening of the US economy should result in the manufacturing rebound in the third quarter.

This is the more positive view of the manufacturing sector. A less optimistic view is that this could be part of a structural decline in manufacturing and last quarter’s weakness is just the canary in the coal mine. A notable headwind would be the continued weakness in oil prices.

This weakness is expected to continue into the foreseeable future with the recent historic lifting of sanctions for Iranian oil. The supply glut would likely worsen with the gradual introduction of Iranian oil into the global market and it could easily spark off a price war with its arch-rival Saudi Arabia in its bid for market share.

Brent oil has declined steadily in the past month to around $55 per barrel now over Grexit fears and the Chinese market plunge. Now that both issues are resolved, the introduction of Iranian oil and the potential price war could send oil prices to below $50. This affects Singapore because we are the world’s third largest oil hub.

According to the Economic Development Board (EDB), the oil industry accounts for 5% of GDP. The role of Singapore as a top three oil export refining centre spawned the oil rig production, refinery, bunkering, and oil & gas equipment industries. These are substantial manufacturing industries and their declines have not been factored in yet.

The other structural challenge for Singapore would be growing trend of onshoring for US companies. This started in 2009 when General Electric (GE) decided that it was not worth manufacturing heaters in China and decided to bring it back to the US instead. GE was the first mover when it decided to offshore in the 1970s to take advantage of low wages in China. However years of steady economic progress and a shrinking labor force due to the one child policy eroded the low-cost advantage in China.

On the other hand, US workers have decided that a low wage is better than no wage and years of manufacturing joblessness weakened the will of the unions. Other renowned MNCs such as Apple, Ford, and Caterpillar came to the same conclusion over the years.

At the rate how the narrowing of US and Chinese wages are going, it is estimated that they will reach parity in ten years’ time. In other words by 2025, it would cost the same for GE to hire a factory worker in China as it would be for them to hire in the US. American blue-collar workers are motivated to increase their productivity with better equipment and skills while Chinese workers are now less willing to work 16 hour days. You would have to remember that the cost of labor depends on both productivity and wages.

The issue of intellectual property has always been an issue for manufacturers operating in China since the 1990s. The US government would complain on behalf of US MNCs to the Chinese government and some token actions would be taken. However it cannot be fully eradicated. When their employees leave, they would take their company blueprints along and after six months a new factory would be producing the same product at half the price.

The US MNCs tolerated all these costs and risks when it was still relatively cheap to manufacture in China. However with spiralling costs, they’ve decided that enough is enough and they are starting to bring their manufacturing home. It is also notable that 2009 was the year when the US was suffering the brunt of the Great Recession when the unemployment rate hit 10% nationally and even higher for the manufacturing-starved Rust Belt states like Ohio.

This matters to Singapore because once these heavyweight manufacturers pull out of China, the resulting effect is that the entire supply chain would be shifted away. Mexico is going to benefit and there will be less demand for Singapore-based suppliers. This can lead to greater shrinkage in our manufacturing industry.

The impact on the Singapore stock market is very clear to see below with the STI falling 5.07% from its 52-week high in April. The STI remains depressed even despite Greece’s successful $96 billion bailout and China arresting its stock market decline.

Global macroeconomic trends are beyond the power of a tiny state like Singapore to alter. We can see agencies like International Enterprise Singapore (formerly known as the Singapore Trade Development Board) doing their best in attracting MNCs such as Rolls Royce and Total to set up manufacturing facilities in Singapore.

The bigger question is whether these admirable efforts would be able to reverse the manufacturing slide from the onshoring phenomenon and falling oil prices.