I last covered Yahoo in March when I wrote that Yahoo’s core business was up for sale. At the time, potential bidders for Yahoo’s core business included companies like Verizon, Time Inc., and even a consortium backed by Warren Buffett. I then followed up with an article on why Microsoft should acquire Yahoo when the software giant entered the race.

My investment thesis then was that Yahoo was being significantly undervalued by the market. If you added up the value of Yahoo’s cash and assets and compared it to its market cap, it implied that Yahoo’s core business was worth less than nothing – which obviously didn’t make any sense, especially since there were now serious bidders on the block:

In early January, Yahoo was hovering around the thirty-dollar mark and I decided to enter a position at $29.68. I could have gone in at a cheaper price when the stock fell below $27 a month later in February but, then again, you can’t time everything perfectly!

Since that February low, however, Yahoo’s stock steadily inched upward as negotiations went on and the possibility of a sale grew stronger. In June, another catalyst emerged as Yahoo announced the separate auction of about 3,000 patents, dubbed the ‘Excalibur’ portfolio, worth around US$1 billion.

In the end, after months of negotiations, Yahoo announced in late July that its core business — which includes Yahoo’s core internet properties, search, email, messenger and advertising technology — is to be sold to Verizon for US$4.83 billion. At that point, Yahoo was now trading slightly above $38. I waited a couple of weeks to see how far the news of the sale would take the stock (I had a price target of $40) and in the end, I decided to exit on 8 August 2016 at $39.11 – a tidy return of 31.8% in seven months. 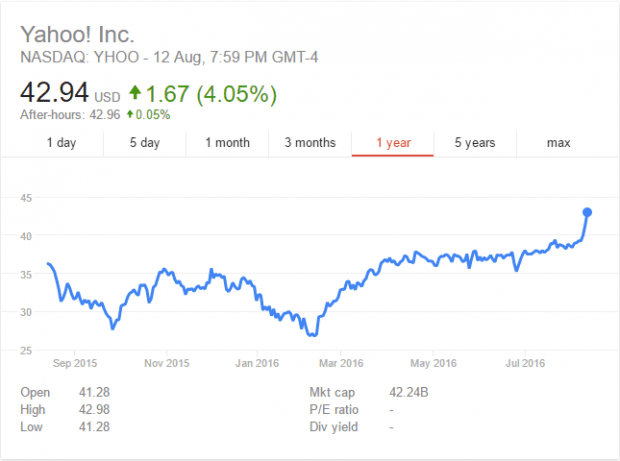 As you can see from the chart above, Yahoo popped to almost $43 last Friday (12 August 2016) on the back of Alibaba’s strong Q2 performance. (Yahoo largely trades as a proxy to Alibaba because it owns a 15% stake in the Chinese company.) Again, I missed out on a better price but you can’t predict these things (Alibaba’s Q2 results could have sucked, you know…) and my original decision to enter and exit Yahoo was already satisfied: the sale of its core business.

So now that Yahoo’s core business has been priced, is Yahoo as a whole still undervalued? Well… yes and no: 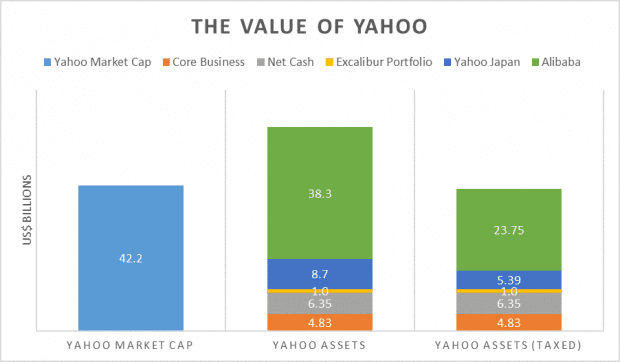 Again, if you add up all of Yahoo’s assets, it implies a total value of around US$59 billion – an upside of 40% compared to Yahoo’s market cap of US$42 billion. But there’s a catch (and the catch has always been there): If Yahoo were to sell its stakes in Alibaba and Yahoo Japan, it would get hit by a very sizable tax bill of 38%. So as you can see on the chart above, Yahoo’s market cap is nearly similar to the total value of its assets after the tax treatment.

So did I factor this into my analysis when I bought Yahoo in January? The answer is yes, I did, but the difference was that it was difficult to put a value on Yahoo’s core business. The sale of the business, and the subsequent announcement of the auction of the Excalibur portfolio, finally allowed Yahoo to unlock value for shareholders.

There is still one more way for Yahoo to further realize its value, though. After Yahoo’s core business is transferred to Verizon (the Yahoo brand will go along too), what was once Yahoo will be renamed and what’s left of its assets will be cash, the Excalibur portfolio, and the stakes in Yahoo Japan and Alibaba.

Assuming the Excalibur portfolio is already sold, the next step then is for the company to find a way to divest its stake in Yahoo Japan (preferably tax-free, of course). What’s left will be the Alibaba stake. At this point, Alibaba can then choose to acquire the stake via a share swap – shareholders will be paid in Alibaba shares instead of cash, which would then avoid any tax liability. This move also means Alibaba is essentially doing a share buyback.

As you can see, there are many factors at play for this to ultimately take place. The company still has to find a tax-efficient way to divest its Yahoo Japan stake first before it can deal with its stake in Alibaba. And then, you’d have to rely on Alibaba to do the share swap, which they might not choose to do so at all. If it happens, great. But if it doesn’t you’re stuck with a shell that basically trades as a proxy to Yahoo Japan/Alibaba. So in the end, all things considered, I decided to it was time to call it a day and take home my profits!