Slowing retail sales in Singapore may have been the gentle braking pressure applied to retailers, local mall operators and its REIT equivalents like CapitaLand Mall Trust, Starhill Global REIT and Fraser Centrepoint Trust, but this braking pressure could get even greater due to an obvious but often underestimated secular trend – online shopping.

Online shopping is by no means an unheard of disruptive technology; it’s been a part of our lives for many years and its impact on malls on Singapore have not been overly drastic. Over in the United States, its effect has been profound with many malls shuttering permanently.

Tech titan Amazon has been mentioned heavily in the media recently regarding their entry into Southeast Asia via Singapore. They’ve also leased a 100,000 sq. ft. space in Jurong from Mapletree Logistics with aims of turning it into a fulfilment centre. They’ve also tried bidding for a stake in RedMart but lost out to Alibaba-backed Lazada in the acquisition.

All these news are an early indication and could be a confirmation that our retail scene would be transforming permanently. We do not see the signs yet, but it will slowly change our retail landscape forever.

Amazon has a business model that if studied carefully, strikes fear in the hearts of all retailers big and small. Two simple charts (metrics) explains their model succinctly: 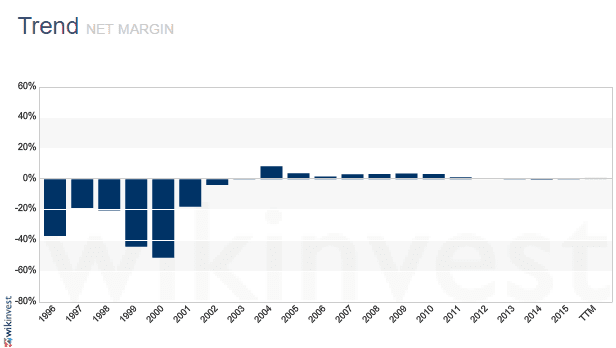 Amazon’s net income margin for the past decade have been razor thin – in the low single digits or frequently negative, meaning that they report net losses in their income. At first glance, profit margins like this turn investors off as it has a major red flag for potential losses. Their P/E ratio is famously known for being a ridiculous number. As it stands today, Amazon’s trading at an insane 170 times earnings. 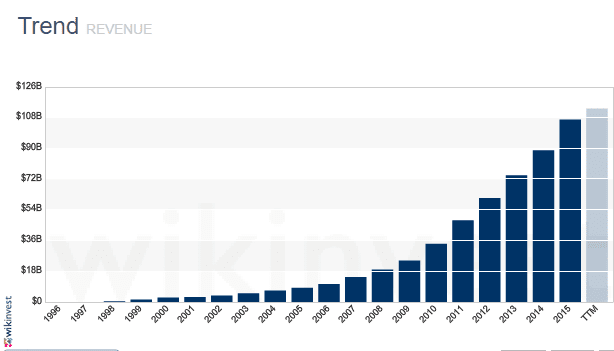 Conversely, Amazon’s revenues have gone gangbusters over the same period of time. They now bank at least US$100 billion annually.

So are they in the business of losing money? Absolutely not – their competitive edge is losing money. In the low-margin business of retail, Amazon knew that the only to grow their business fast and steal market share away from incumbent giants Walmart and other departmental stores was to start a price war – a very ugly one.

Walmart’s profitability has started to slow and they’ve begun to move into the online space that’s already dominated by Amazon, no one knows if that would be successful. Famous for being a value investing case study for having negative working capital due to their insane product churn rate and incredible supply chain control, their very competitive advantage has been replicated into 1s and 0s and is now being used against them – to their detriment.

But just how ugly can it get? Look at the lengths they’re willing to go just to gain a price advantage over sellers on their own platform: 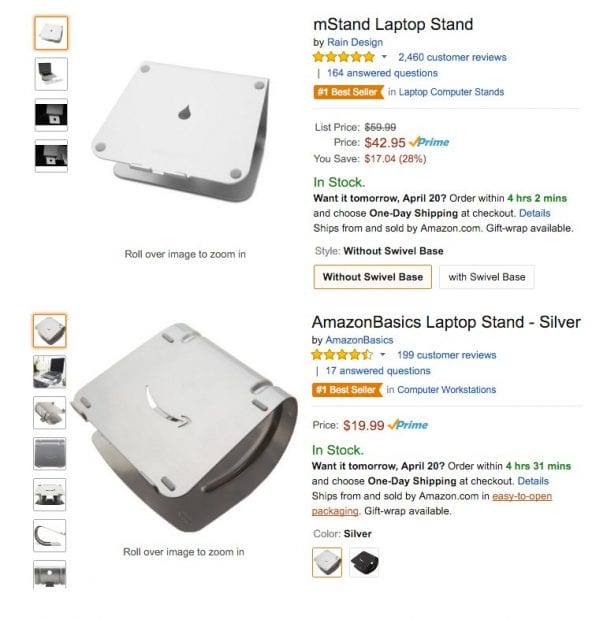 This poor sod (Rain Design) sells a laptop stand for $40, gets close to an average of 5-star reviews. Amazon’s all-powerful algos caught wind of their success and sent a signal to their masters that probably went something like:

“Hey guys, this guy’s product is so easy to replicate and sell, let’s ctrl+c – ctrl+v!”

Amazon then sells its very own laptop stand under their private label AmazonBasics, much like First Choice by Cold Storage, at half the price. As you’d expect, for no frills, undifferentiated products such as a laptop stand, Amazon beat them at their own game. This also shows how a company successfully harnesses big data by utilizing analytics to inform them of actionable opportunities to pounce on. All this talk of big data, data analytics and artificial intelligence by endless companies out there are just talk, Amazon walks the talk. In fact, they flew.

Regular readers would know of Amazon’s prowess in the cloud space. They’re the biggest cloud providers in the world. So it is hardly surprising that they have a simple algorithm that sniffs out hot sellers on their platform to prey on. This might seem like bad business practice (hey, you’re destroying your customers) but because of their near-monopoly on a massive customer base, many small sellers have no other choice.

Here’s a small extract from that article:

“In his annual shareholder letter earlier this month, Chief Executive Officer Jeff Bezos said Amazon is the “best place in the world to fail.” That philosophy applies to private-label products, which quickly disappear if they receive poor customer ratings. About 96 percent of AmazonBasics products had a rating of 3.5 stars or more, according to the Skubana report. The authors’ advice to merchants: “If you have a product that is lower than 3.5 stars, that product is dead to you and your customers. Liquidate and move on.”

Amazon’s size gives it an advantage over so-called direct-to-consumer startups such as mattress seller Casper and eyewear merchant Warby Parker because Amazon can experiment with one product rather than having to build out an entire line. If an item flops, it’s no big deal.

Amazon isn’t only copying products made by small, little-known merchants like Rain Design. Its private-label lines are increasingly competing with name brands, and nowhere is that happening more than in apparel.”

The only way to fight this is to be differentiated and be able to foster consumer loyalty. A laptop stand isn’t anywhere close to being able to do both – it isn’t differentiated, and when consumers buy it, they don’t usually need it again unless it breaks so even loyal customers don’t see the need to come back.

With Amazon setting its eyes on fresh grocery deliveries and apparel, this steamroller won’t be sparing anything or anyone here in Singapore.

So apart from disrupting retail giants like Walmart, Sears and Macy’s or smaller online-only e-tailers, Amazon’s bid for RedMart signals their intentions for a food or grocery delivery service here in Singapore.

Knowing the lengths at which Amazon is willing to go, local retailers may have close to no idea what’s about to happen to them, especially the ones selling cheap products that are easily replicable, or blogshops that will either be bought out (good for them) or copied relentlessly under one of Amazon’s seven quietly-launched in-house clothing brands – with products never selling for more than $100.

Although TaoBao, Qoo10 and various other online shopping websites have seen great successes here in Singapore and probably contributed to brick-and-mortar stores’ pain, Amazon might just be the tipping point in the deceleration of earnings of retailers and mall owners here.

Taobao and Qoo10 may not have the same copycat prowess and branding strength Amazon has, but they’ve started the ball rolling with more consumers being receptive to online shopping. With Alibaba’s increased interest in Singapore with their Singpost investment for e-commerce logistics, things are about to heat up.

It doesn’t matter if Amazon or Alibaba is more successful in their potential price and product war. Singapore would constitute just a drop in the ocean’s worth of revenues and profits for the two giants. But the real losers would be the local retailers, malls and REITs that run some of the malls:

Being a small country has its advantages – you can visit nearly every single mall in just a single day without spending too much on transport. If you’re a REIT investor and have interest (monetary or not) in the REIT stalwarts like CapitaLand Mall Trust and Fraser Centrepoint Trust, there are actions you can take to see how they fight or embrace this disruption. It is very important to do your homework:

On financial metrics from annual reports, it’s even easier:

On the flip side, staying in context of the REIT industry – the beneficiaries of an e-commerce war could possibly be logistics property owners. All those physical goods being stored, packed and shipped out need a physical location for distribution, it’s a tangible fact that can’t be changed.

Amazon leased a 100,000 sq ft space from Mapletree Logistics Trust; Alibaba is probably going to take up space in the new Singpost building. If this war gets bigger, the giants may even build their own centres, bypassing the REITs to handle the volume. They have the financial and technological resources to do whatever they want – as investors, we must strive to find out who they will affect and in what way will they affect them.

The signs aren’t looking good for the retail industry in Singapore, and it could get a whole lot worse once Amazon and Alibaba fully step into the fray – the giants are coming.