We’ve mostly been writing about local stocks as we as readers, authors, and investors can relate to them easily. However, Singapore’s market is just about as big as it gets: it’s miniscule.

So let’s take a slow, article-by-article tour around the world, as we hunt for companies that are beyond our horizons but we still can relate to as we see their brands and use their products just as often as local companies’.

Apple recently announced their annual (FY2015) results, and the numbers are simply mind-boggling (all in US$):

They reported a 28% increase in revenues ($51 billion) to $234 billion, and in the words of Tim Cook, “To put that into some context, our growth in one year was greater than the full year revenue of almost 90% of the companies in the Fortune 500.”

Their cash hoard on their balance sheet is at a record high at $205.7 billion. To put that into perspective, that ranks them #50 in global nominal GDP rankings of countries. The largest actively traded stock in Singapore is Singtel, and its market cap sits at just US$45.6 billion, Apple’s cash alone can buy 4.5 Singtels with no need for issuing debt.

This is a classic sign of a company with a huge economic moat and is enjoying excess profits due to its competitive advantage. Apple’s peak theory be damned, its size and the growth on its size despite currency headwinds and global slowdown defies all laws of physics and mathematics. 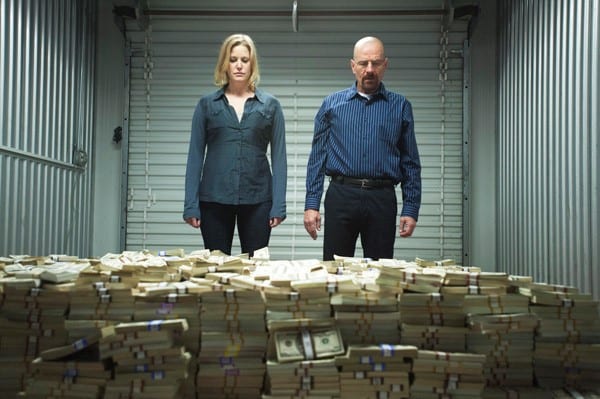 “Skyler, how much did we make investing in Apple again?”

Naysayers of Apple do have a point: being the largest company in the world by market cap ($665 billion), how much further can its stock rise? From late 2011 till today, Apple’s stock has doubled, rewarding shareholders on the way with dividends and buybacks as well.

So how much further can it rise?

Let’s have a look at their segments and find out which one seems to be minting enough money to bail Greece out:

An overall 52% YoY increase in revenue from 2014, with iPhones sales in China increasing 120%, and South Asia growing at 35%. This is due to the rollout of the new iPhone 6S, pushing sales to another record high for Apple – 231 million units sold in the past 12 months. This segment is both the biggest and the fastest growing cash cow for Apple, representing 66% of Apple’s total net sales alone.

An overall 6% YoY increase in sales, slowing down significantly from double-digit gains in the past. Probably cannibalized by its own iPad and intense competition from cheaper competitors.

A 23% YoY decrease in revenue from 2014, which is significantly more than the -5% print from 2013-2014. Apple’s not performing well in this segment and has since reduced its channel inventory.

Other products of Apple comprises Apple Watch, Apple TV, Beats products, iPod and accessories. Apple has seen a marked increase of 20% YoY in this segment compared with -10% in the previous year, due to the rollout of the new Apple Watch and strong growth from apps.

Apple’s management guided well enough that Apple Pay is seeing double digit growth in transactions month over month as they roll out its service to major businesses like Starbucks, which will support Apple Pay in all of its US stores in 2016. Apple has also partnered with American Express to bring its service to its global users; Apple Pay would be available to AMEX customers in Australia and Canada by 2015, and Spain, Singapore and Hong Kong by 2016.

Like Visa, American Express and MasterCard, Apple would have to push this platform aggressively in order to reach critical mass to see explosive growth in transactions: the more people using it, the more businesses would want to implement Apple Pay and even more people would be enticed to use it. It’s a classic network effect and it’s also considered an economic moat when successfully executed.

Apple Music currently has 6.5 million paying customers, and has since brought Apple Music into China along with iTunes, movies and iBooks this quarter. Management also mentioned bringing Apple Music to Apple TV. So it’s obvious to see that with explosive iPhone growth in China, Apple can expect to see similar gains in its services as its iOS ecosystem (its moat) captures users and forces them to use their services.

One segment that Apple didn’t include in their 10-K is their enterprise segment. It isn’t insignificant as you might think if it goes under-reported; management estimated that enterprise markets accounted for $25 billion in revenue, up 40% from the previous year. Apple recently partnered with Cisco to bring their products to enterprise users and are beginning to reap early rewards.

IBM has also started utilizing Apple’s iOS to produce 55 apps in healthcare, travel, transportation and financial services to enterprise customers. Management also mentioned that utilization of sales forces for their enterprise market would be that of their partners and not of their own, saving a lot of staff expenses on Apple’s side. In other words, Apple would simply use IBM’s large sales force to advertise and sell their enterprise solutions.

Although the take-up rate of Apple’s enterprise solutions is slow, it’s still growing and it could be another key growth driver for Apple and might finally be released from its cage and reported as a separate segment.

With Singapore nearly entering into a recession and the IMF repeatedly revising lower global GDP growth and China reporting more anemic numbers, one would expect companies with global revenue pools to show the same gloomy outlook in their earnings. Not Apple.

The China story: Apple’s a relatively new entrant in China due to past restrictions. Now that this huge market is open, Apple has seen its revenues dramatically gaining steam. App store revenue growth in China grew a whopping 127% YoY. Management has also guided 40 Apple stores to open in China alone by mid-2016.

Tim Cook mentioned that 68% of Chinese customers of the iPad reported it was their first ever tablet, and 40% have never owned an Apple product before. That’s how new Apple is to the Chinese consumer. To put that into perspective, we as Singaporeans have probably gone through at least one or two tablets in the past five years. This means if existing Chinese consumers are satisfied with Apple products, they might be more inclined to purchase more Apple products across its product mix and upgrade their products once Apple announces newer versions.

If I were to take away the “Apple” badge and just present to you the above figures, you’d probably think this is too good of a company to exist, or suspect it’s a fraud. The astonishing numbers reported by Apple still confounds market participants globally, with numerous talking heads like David Einhorn and Carl Icahn mentioning that it is still vastly undervalued, and others contesting otherwise.

I wouldn’t be doing any financial modelling for Apple as there are many assumptions whereby people may disagree on like the discount rate, WACC and growth rate. We won’t recommend nor push stocks to you, but we can do a simple analysis that would enable you to do your own due diligence. So just by looking at a snapshot of the past for Apple, it still seems like an attractive company with a growth story attached to it. In short, a 633 billion dollar company is cheap.

The risk is of course China changing its mind and kicking Apple out of China (like it did with Google), that would put a halt to its explosive growth. Another risk for global companies would be forex volatility. Although they were impacted, Apple’s sales growth brushed aside “the strong USD and weaker everyone-else’s dollars” economic condition. In constant currency, their growth this quarter would have been 8% higher, or $3.4 billion higher.

To give you (again) the scale of how big that is, that 8% alone exceeds UOB’s revenue of US$1.5 billion this quarter, and Singtel’s annual net profit (FY2015) of US$2.7 billion.

Companies blaming currency volatility for their bad earnings can look to Apple and ask themselves the question: “What’s your excuse?”

Apple is without a doubt a giant and in a class of its own. With more cash that exceeds hundreds of countries’ GDP, explosive earnings growth and return on equity, this is a classic case of a huge economic moat that drowns Apple and its shareholders in a sea of money with tsunamis every quarter adding more cash than ever. 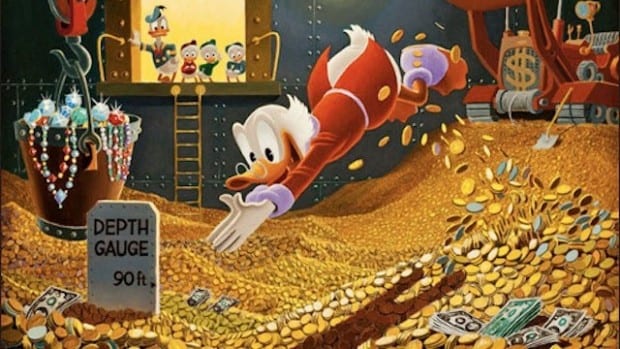 The trillion dollar question would now be: how much more can Apple grow?