In 1935, Wee Kheng Chiang founded United Chinese Bank together with six partners after raising $1 million. At that time, it was established mainly to cater to the financial needs of the local Hokkien community in Singapore. In 1965, the bank changed its name to United Overseas Bank (UOB) and has kept its name ever since.

Today, UOB operates a global network of over 500 branches and offices in 19 countries worldwide. The bank is now the third largest financial services group in Southeast Asia (after DBS Group and OCBC) and is worth S$48.5 billion in market capitalization.

In this article, I’ll bring a quick overview of UOB’s performance over the past 10 years, the current risks it faces, and its outlook in the near future.

Here are 11 things you need to know about UOB before you invest:

1. UOB has a compound annual growth rate (CAGR) of 9.62% in its loan assets over the last 10 years. It has increased from S$92.7 billion in 2007 to S$232.2 billion in 2017. This is contributed by continuous rise in loan disbursements in key segments such as housing loans, building & construction, and general commerce during the period. 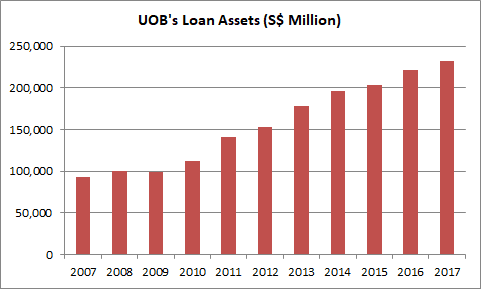 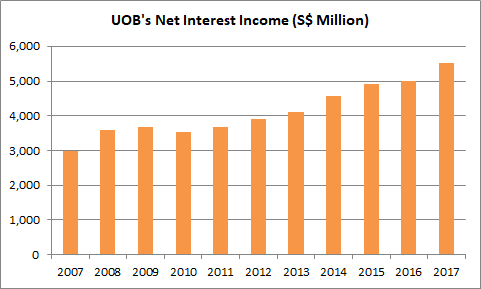 3. UOB has a CAGR of 5.79% in non-interest income over the last 10 years. It gradually increased from S$1.89 billion in 2007 to S$3.32 billion in 2017. This is mainly contributed by achieving higher fee and commission income which are sourced from credit cards, fund management, wealth management, corporate finance services, and service charges during the period. 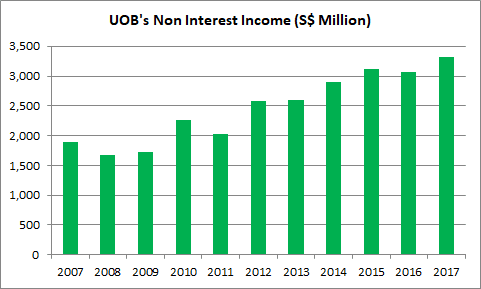 4. As a result, UOB has achieved a CAGR of 6.15% in total income over the last 10 years. It has grown from S$4.87 billion in 2007 to S$8.85 billion in 2017. This is directly contributed by steady growth in both net interest income and non-interest income during the period. 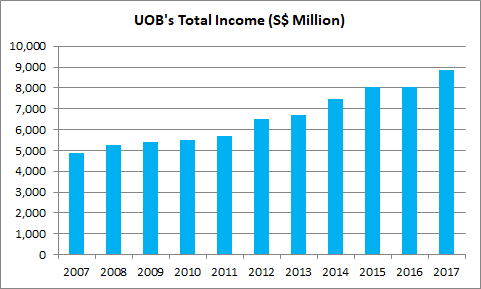 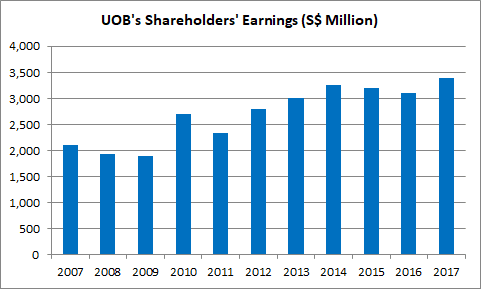 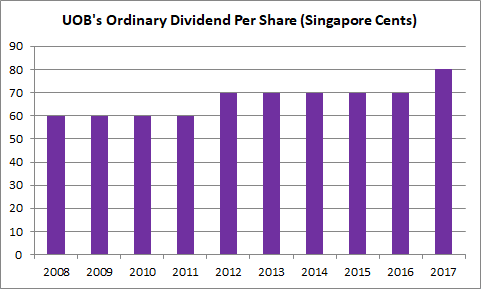 7. UOB reported a total capital adequacy ratio of 18.7% in 2017. This is in line with Basel III capital standards and is above the minimum capital adequacy ratio (including buffer requirements) of 11.5% required by the MAS. This means UOB is well-capitalized now to pursue business growth and to meet adverse market conditions or economic situations in the future.

8. In 2017, UOB increased its specific allowances from conservative collateral markdown and accelerated non-performing assets (NPA) recognition of its oil & gas and shipping exposures. This caused the bank to report a hike in its non-performing loan (NPL) ratio from 1.4% in 2015 to 1.8% in 2017. Its NPL coverage ratio has lowered from 130.5% in 2015 to 91.0% in 2017. UOB’s defensive stance towards the oil & gas and shipping industry is similar to DBS Group and OCBC over the last two years despite a recent recovery of crude oil prices to as high as US$70 a barrel. This is due to lack of income visibility from these industries as both oil and gas and shipping companies need time to secure new contracts to improve their financial performance. 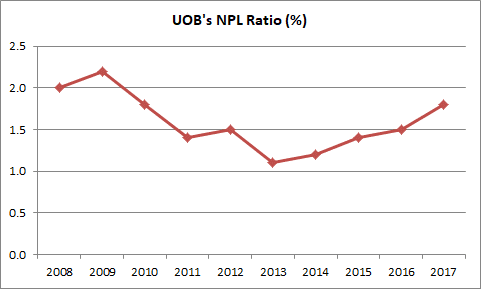 9. On 23 March 2017, UOB announced that it received preliminary approval from the State Bank of Vietnam to establish a foreign-owned subsidiary bank in Vietnam. UOB is the first Singapore bank to obtain this license. Shortly after, UOB received the license in September 2017 and proceeded to launch its business banking services in Vietnam which include transactional accounts, small business loans and trade finance to cater to the needs of small businesses in the country. It marks yet another significant milestone for UOB as it expands its market presence in Southeast Asia.

10. On 23 November 2017, UOB announced the opening of its branch in Kunming, China. The branch is UOB’s seventeenth branch in China and aims to help businesses in Southwest China with their cross-border expansion plans, and advance the bank’s efforts to further capitalize on China’s Belt and Road Initiatives. 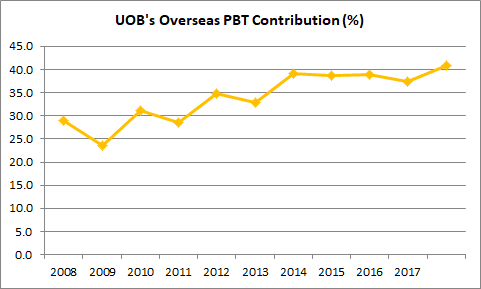 In summary, UOB has built a solid track record of delivering growth in total income, earnings, and dividends to its shareholders over the last 10 years. As I write, UOB is a leading bank in Asia with credit ratings of ‘Aa1’ by Moody’s and ‘AA-’ by Standard & Poors and Fitch Ratings respectively.

Definitely, UOB has built a legacy of resilience as it withstood the hardest of times. It has survived four years of the Japanese occupation in Singapore in the early 1940s, Black Monday in 1987, the Asian Financial Crisis in 1997, the Dotcom Bubble in 2000, and the Global Financial Crisis in 2008. So will UOB survive another 80 years from today? Time will tell. But, for now, it is sufficient to say that UOB is well-capitalized and remains in position to benefit from the economic growth across Asia.

Read also: Our 10-year performance summaries on DBS and OCBC