It’s around that time of year again when Warren Buffett releases his annual letter to Berkshire Hathaway shareholders. (Buffett has been writing his annual letters since 1965 and you can read his past letters here.)

I shared 14 things I learned from Buffett’s 2016 annual letter the previous year (and the year before that). This year, Buffett has once again shared his wit and wisdom as he reveals his thoughts about Berkshire Hathaway’s past year’s performance and his outlook ahead.

So if you don’t have the time to go through all 17 pages of his latest essay, here are seven things I learned from Warren Buffett’s 2017 annual letter to Berkshire Hathaway shareholders:

1. New GAAP (generally accepted accounting principles) rules mean that Berkshire must now include unrealised fair value gains/losses in its net income figures. Previously, Berkshire only had to include realised gains and losses. As we know, Berkshire owns a large amount of marketable shares (over $170 billion as at 31 December 2017) and any swings in value will severely distort the company’s results. Buffet cautions:

“For analytical purposes, Berkshire’s “bottom-line” will be useless.”

2. Berkshire only made one sizable standalone acquisition in 2017 – a 38.6% interest in Pilot Flying J with plans to boost ownership to 80% in 2023. PFJ is the largest U.S. truck stop operator with more than 750 locations in the U.S. and Canada. Despite the availability of extraordinarily cheap debt to fund more acquisitions, Buffett’s taste for debt remains low:

“Our aversion to leverage has dampened our returns over the years. But Charlie and I sleep well. Both of us believe it is insane to risk what you have and need in order to obtain what you don’t need… Despite our recent drought of acquisitions, Charlie and I believe that from time to time Berkshire will have opportunities to make very large purchases. In the meantime, we will stick with our simple guideline: The less the prudence with which others conduct their affairs, the greater the prudence with which we must conduct our own.”

3. Berkshire’s already massive float increased to $114 billion in 2017. As is widely known, Berkshire invests this float to generate capital gains, interest, and dividends. He highlighted that, unlike bank deposits or insurance policies with surrender options, Berkshire’s float can’t be withdrawn and suffer a ‘run’ in times of crisis:

Read also: The one ratio to use when valuing an insurance stock

“No company comes close to Berkshire in being financially prepared for a $400 billion mega-cat. Our share of such a loss might be $12 billion or so, an amount far below the annual earnings we expect from our non-insurance activities. Concurrently, much – indeed, perhaps most – of the p/c world would be out of business. Our unparalleled financial strength explains why other p/c insurers come to Berkshire – and only Berkshire – when they, themselves, need to purchase huge reinsurance coverages for large payments they may have to make in the far future.”

“Berkshire’s goal is to substantially increase the earnings of its non-insurance group. For that to happen, we will need to make one or more huge acquisitions. We certainly have the resources to do so. At yearend Berkshire held $116.0 billion in cash and U.S. Treasury Bills (whose average maturity was 88 days), up from $86.4 billion at yearend 2016. This extraordinary liquidity earns only a pittance and is far beyond the level Charlie and I wish Berkshire to have. Our smiles will broaden when we have redeployed Berkshire’s excess funds into more productive assets.” 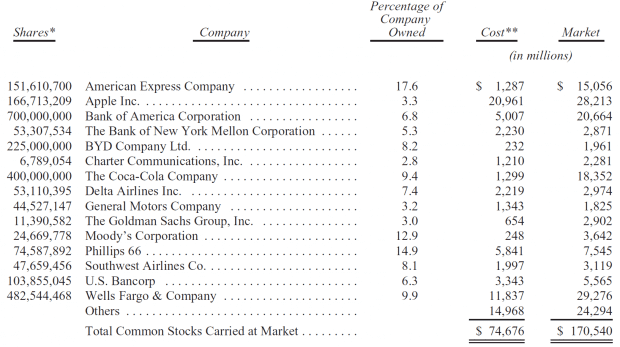 Buffett reminded shareholders that he views these investments as part-ownership of their respective businesses for the long term:

“Charlie and I view the marketable common stocks that Berkshire owns as interests in businesses, not as ticker symbols to be bought or sold based on their ‘chart’ patterns, the ‘target’ prices of analysts or the opinions of media pundits. Instead, we simply believe that if the businesses of the investees are successful (as we believe most will be) our investments will be successful as well. Sometimes the payoffs to us will be modest; occasionally the cash register will ring loudly. And sometimes I will make expensive mistakes. Overall – and over time – we should get decent results.”

7. Berkshire has suffered four major crashes in the last 53 years, and used it as an example of how stock prices can swing drastically in the short term and why one should never borrow money to invest:

“This table offers the strongest argument I can muster against ever using borrowed money to own stocks. There is simply no telling how far stocks can fall in a short period. Even if your borrowings are small and your positions aren’t immediately threatened by the plunging market, your mind may well become rattled by scary headlines and breathless commentary. And an unsettled mind will not make good decisions.”

One more bonus point: For the third year running, Berkshire’s annual meeting will once again be available via live webcast on Yahoo. To view the event, go to https://finance.yahoo.com/brklivestream at 8:45 a.m. Central Daylight Time (GMT-6) on Saturday, 5 May 2018. If you’d like to read Buffett’s full 2017 annual letter to Berkshire Hathaway shareholders (which I recommend you do), you can click here. Enjoy the read!