If you study the Investment Quadrant, you realise that selecting a good company is only part of the equation. The final step is to buy a stock only when it’s trading at a low valuation. Remember, a good company can still be a bad investment if you overpay for it. So knowing when to buy a stock cheap is just as important as picking the right company if you want to earn good returns in the stock market in the long run.

So when are the best times to buy stocks at a discount? Here are three scenarios I personally look out for when it comes to finding undervalued stocks.

1. Buy when the index dips

When the index dips more than 20%, many times, it signals an opportunity to invest. This is because when the market falls as a whole, a lot of good companies get taken down for a ride as well, even though their business is still doing well. Therefore, a market crisis is usually one of the best times for an investor to increase his potential returns. Eventually, the stock market will recover, along with the share prices of these good companies.

If you look at the table above, the Straits Times Index has declined by 20% or more six times in the last 20 years, which means there have been ample opportunities to participate in the stock market when stocks are trading at beaten-down prices. So the next time you see the stock market crashing, instead of panicking and running for the hills, slow down, take a deep breath and start to look for opportunities.

The next best time to buy a stock is when the company is affected by temporary trouble.

Yet if you looked Thai Stanley Electric’s fundamentals, it was still the industry leader with a 95% and 55% market share in motorcycle lights and car lights respectively. The company had a net cash position with zero debt and was still paying a dividend despite the bad situation.

If you have bought Thai Stanley Electric during the time of the disasters, you would’ve made over 80% in just a year once the company recovered. 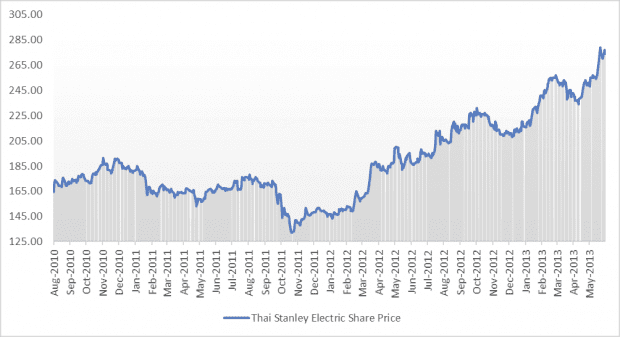 So next time you see a company hit by trouble, do your research and find out if the situation is temporary and whether the company can recover fully from the setback. If so, you might have an opportunity in your hands.

3. Buy when profits decrease in the short term

Oftentimes, when a company’s profits fall, its share price follows, and investors start to panic. Granted, a prolonged decline in profit is something to worry about as it may signal a deterioration in the company’s long-term competitiveness or a structural shift in the industry. However, if the fall is temporary or cyclical, it might be time to have a look.

Premier Marketing produces a brand of fish snack called Taro which has a 70% market share in Thailand. As a regular visitor to the country, I personally knew that Taro is the most popular fish snack around and easily found in convenience stores and supermarkets everywhere.

Later, I found out the decrease in profit was due to two issues. First, weakening domestic consumption in Thailand was affecting Premier Marketing’s snack business and curtailed its growth. Second, sales from its tuna export business was affected by the economic slowdown in the countries Premier Marketing exported to.  By understanding the situation, we determined that company was likely to recover and the issues were temporary: the economy moves in cycles and there was no evident structural shift. On top of that, Premier Marketing had a net cash position with zero debt, and a track record of paying a growing dividend and a return on equity above 20%.

At the time of our research, Premier Marketing’s share price was THB8.30. This gave us a P/E of 12.30 based on average earnings and a dividend yield of 5%. It looked like an opportunity to invest in a good company at a reasonable price, which we did. Premier Marketing’s share price is now at THB13.50 (as at 22 September 2017), giving us a 77.30% gain, inclusive of dividends, from just one year of holding. 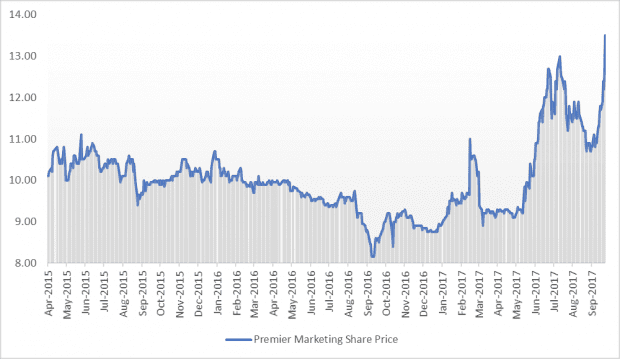 So next time you notice a company reports a drop in profit and its share price falls in tandem, go and take a look. If the company’s long-term fundamentals are still good and you determine, based on thorough research, that the decline in profit is temporary, it may be a good opportunity to invest.