The year was 2001. Two friends, Lim Jit Poh and Kua Hong Pak, met up for some sushi and sake at Unkai, a Japanese restaurant at the now-defunct ANA hotel in Nassim Hill. The meeting was kept a secret as it was more than casual. Little did anyone know that a simple dinner was the birth of one of the largest land transport conglomerates in the world.

So, who are Lim and Kua? Back then, Lim was the chairman of Comfort Group. It was rich in cash reserves and had the largest taxi network in Singapore with 11,340 vehicles under the Comfort and Yellow Top brands. Lim foresaw limitations in the local taxi market and was keen to expand overseas for future growth.

Meanwhile, Kua was a director of DelGro. It owned SBS Transit, the leading bus operator in Singapore with 2,872 buses. DelGro also had a fleet of 5,116 CityCab taxis and was a major rival of Comfort Group in the local taxi market. DelGro had been more aggressive in expanding overseas despite being less profitable.

Over a year, both Lim and Kua worked towards the merging of the two entities into a single conglomerate that had the adequate financial strength, credibility and image to compete globally. On 21 November 2002, the boards of both companies came together to announce the merging of Comfort Group, DelGro, SBS Transit, and VICOM. It rocked the entire nation as no one expected a merger on such a scale.

The merger was completed in 2003 and ComfortDelGro Corporation Limited (SGX: C52) was established. Ever since, it has grown into an international land transport company with a presence in 35 cities across seven countries with a current fleet size of over 44,000 buses, taxis and rental vehicles.

As I write, ComfortDelGro is worth around S$ 4.3 billion in market capitalization and is among the top 30 constituents of the Straits Times Index. In this article, I’ll bring a detailed account of ComfortDelGro’s growth story thus far, the challenges it now faces, and its outlook towards the near future. Here are the 12 things you need to know about ComfortDelGro before you invest:

1. ComfortDelGro’s public transport services division remains the biggest revenue contributor to the group. It derives income mainly from providing bus and rail services under SBS Transit in Singapore, ComfortDelGro Cabcharge Pty Ltd in Australia, and Metroline Ltd in the United Kingdom. Over the last 10 years, ComfortDelGro has achieved a CAGR of 4.65% in revenues for this division, increasing from S$1.47 billion in 2006 to S$2.31 billion in 2016. 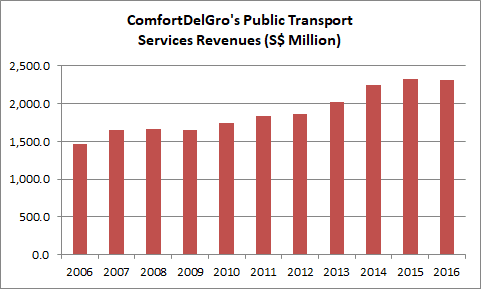 2. ComfortDelGro’s taxi division is the second largest revenue contributor. It has maintained its position as the leading taxi operator in Singapore with a combined fleet of 16,822 Comfort and CityCab taxis. In addition, ComfortDelGro has built a strong presence in China — it operates 5,501 taxis in Beijing, 729 taxis in Jilin, 1,293 taxis in Shenyang, 484 taxis in Shanghai, 679 taxis in Nanjing, and 854 taxis in Nanning. Over the last 10 years, ComfortDelGro has achieved a CAGR of 4.39% in revenues for its taxi division, increasing from S$ 872.2 Million in 2006 to S$ 1.34 Billion in 2016. 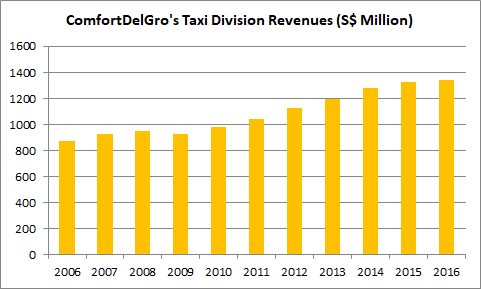 3. ComfortDelGro’s automotive engineering division is the third largest revenue contributor to the group. It maintains the group’s fleet of taxis in Singapore under ComfortDelGro Engineering Pte Ltd and derives income from diesel sales. This division has posted slowing revenues over the last four years, from S$354.9 million in 2012 to S$204.8 million in 2016. This was due to reduced taxi maintenance and lower volume of diesel sales achieved during the period. 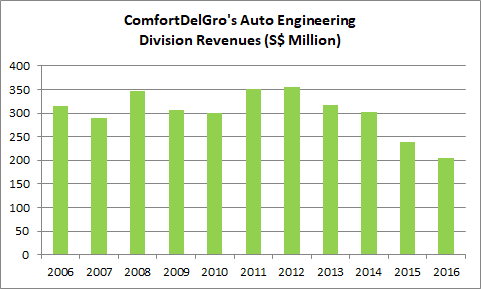 4. ComfortDelGro operates its vehicle inspection & testing services division mainly under VICOM Ltd (SGX:  V01). It is the fourth largest and the fastest growing division in ComfortDelGro. Over the last 10 years, ComfortDelGro has achieved a CAGR of 6.47% in revenues for this division, increasing from S$55.4 million in 2006 to S$103.7 million in 2016. 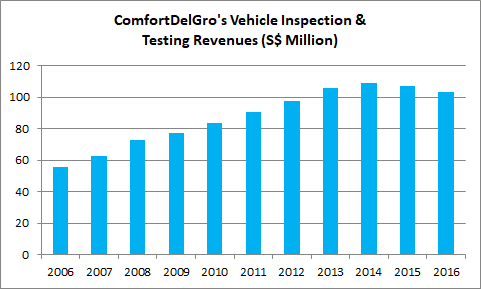 5. Overall, ComfortDelGro has achieved a CAGR of 3.81% in group revenues over the last 10 years. It has grown from S$ 2.79 billion in 2006 to S$4.06 billion in 2016. This was contributed by steady growth in its public transport, taxi, and vehicle testing & inspection divisions during the period. 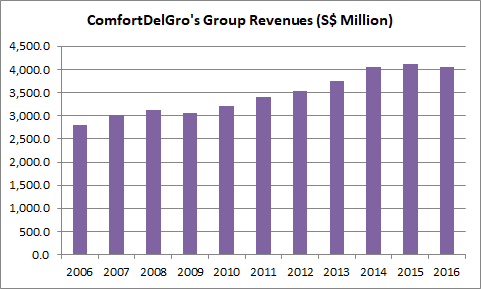 6. ComfortDelGro has achieved a CAGR of 5.92% in shareholders’ earnings over the last eight years. It increased from S$200.1 million in 2008 to S$317.1 million in 2016, after a dip in profits recorded between 2006 to 2008. This is in tandem with its growth in group revenues and stable profit margins maintained during the eight-year period. ComfortDelGro has also maintained a return on equity of 12%-13% since 2008. 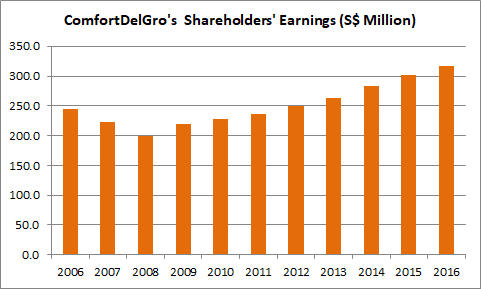 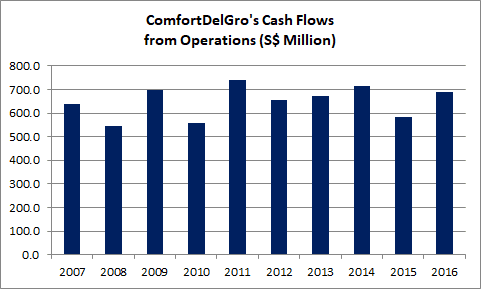 ComfortDelGro is a cash-producing business and doesn’t need to continually raise equity or debt to operate/expand its business and reward its shareholders with dividends. As at 30 June 2017, ComfortDelGro has S$606.6 million in cash reserves and a debt-to-equity ratio of 0.30. 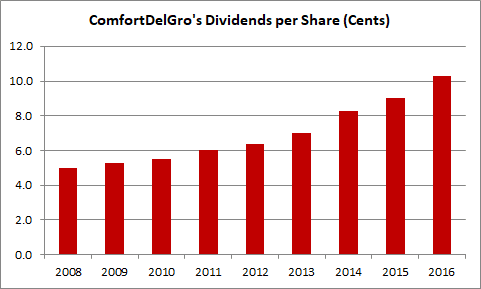 9. ComfortDelGro is exposed to the risk of adverse foreign exchange movements. This is because ComfortDelGro derives substantial income from the United Kingdom, Australia, and China. Overall, the group is reducing its foreign exchange risk as contribution of foreign revenues has fallen from 46.6% in 2007 to 37.3% in 2016. 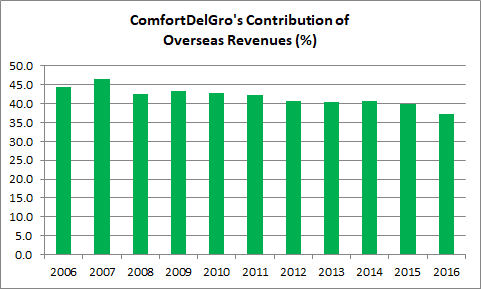 10. In 2013, Uber and Grab were officially launched to the public in Singapore. Taxis now had to compete with private-hire cars and the disruption caused by ride-hailing technology changed the landscape of the local taxi industry. Since then, the total number of taxis in Singapore has fallen from 28,210 in December 2012 to 25,325 in July 2017. There has also been a fall in the average daily number of taxi trips and the amount of taxi driver vocational licenses issued by the Land Transport Authority (LTA). From the LTA, I’ve learnt that ComfortDelGro started to report a reduction in its taxi fleet in mid-2016 — its number of Comfort and CityCab taxis fell from 17,143 in April 2016 to 15,472 in July 2017, a drop of 9.7% in 15 months.

Recently, Grab offered S$50 in daily rental discounts for six months to ComfortDelGro drivers if they decide to join any of Grab’s partner taxi firms: Trans-Cab, Prime Taxi, SMRT Taxis, Premier, and HDT Singapore Taxi. As many as 2,000 ComfortDelGro taxi drivers have expressed interest in jumping ship. It poses a challenge to ComfortDelGro in retaining its pool of drivers in a continuously shrinking taxi market in Singapore. As such, the board of directors has revealed lower revenues expectation for its taxi division for the foreseeable future. 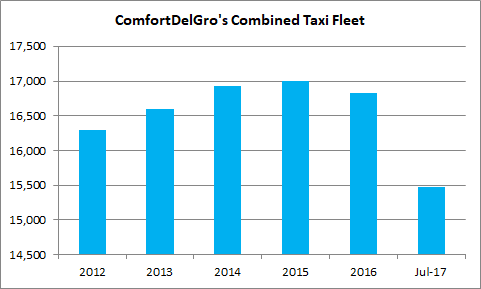 11. Looking ahead, ComfortDelGro expects to derive revenues from multiple long-term contracts. The major contracts include:

In summary, ComfortDelGro has built a track record of increasing sales, profits, and dividends to its shareholders over the last decade. Moving forward, the board expects to see growth from its public transport services division due to a full-year contribution from the Bus Contracting Model, the opening of Downtown Line 3, and its recent acquisition of the remaining 49% interest of ComfortDelGro Cabcharge Pty Ltd for A$186 Million.

However, the disruptive threat of Uber and Grab continues to loom large for ComfortDelGro’s taxi division. The board has expectations of lower revenues from its taxi, automotive engineering and vehicle testing & inspection divisions in the immediate future and they may very well curtail the group’s overall growth.