Telekom Malaysia Berhad is one of the largest government-linked companies in the country. The company employs more than 28,000 people and has a market capitalisation of over RM24 billion. Throughout the years, Telekom Malaysia (TM) has evolved from being the country’s national telco for fixed line, radio, and television services into one of Malaysia’s largest broadband service providers. Its broadband service – unifi — has over 2.3 million customers.

When we reached the venue for the AGM, it took us by surprise as the place looked like a day out for the family instead! There were staff encouraging people to sign up for unifi in order to participate in a lucky draw which later took place while the AGM was being conducted. We’re sure some shareholders missed out on the meeting to be at the draw and, in hindsight, it might have been better to hold the draw after the meeting had concluded.

In any case, here are seven things we learned from Telekom Malaysia AGM:

1. The CEO highlighted that people nowadays capture meaningful moments in their lives and at work using multiple digital platforms. Therefore, Telekom Malaysia has leveraged on this trend to structure their business model moving forward. Telekon Malaysia’s new tagline is “Life Made Easier” and the company has packaged their products and services into five key pillars: Smarter Living, Smarter Business, Smarter Cities, Smarter Communities and Smarter Nation. 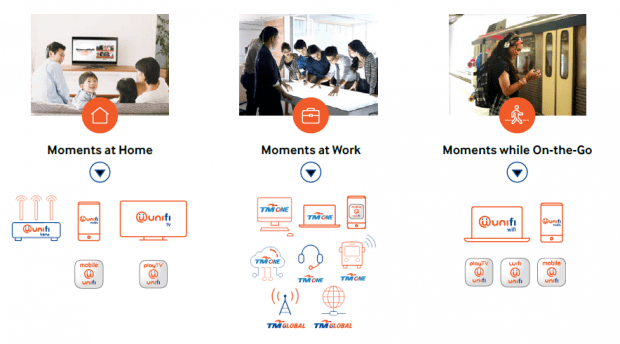 3. Minority Shareholder Watchdog Group commented that even though unifi’s mobile 4G LTE network coverage has reached 74% of the population, it is still lower than Maxis (92%), Digi (87%) and Celcom (87%). They asked how the management planned to improve unifi mobile’s network coverage to match the competition. The management said that unifi’s service coverage is nationwide and includes various technologies including fixed line (fibre, copper), wireless (LTE), and WiFi. They plan to target households and maximize their technology assets to rollout a ‘convergence infrastructure’ and deliver a seamless experience to customers instead of focusing on LTE only.

4. Operating revenue increased significantly year-on-year by 8.3% to RM12.1 billion in 2017. This was mainly contributed by strong growth in unifi. However, EBIT (earnings before interest and tax) fell 5.3% to RM1.1 billion mainly due to higher operating costs. Normalised profit after tax and non-controlling interests (PATAMI) grew 1.8% to RM863.2 million, after excluding a one-time foreign exchange gain on the group’s borrowings in 2017.

5. The management highlighted that CAPEX in 2017 fell to RM2.76 billion (22.8% of revenue) due to a reprioritization of projects. The amount was 22.8% of total revenue, which is lower than the 25-30% allocated. 42% of CAPEX was spent on network access, 34% on core network and 24% on support systems. In 2018, Telekom Malaysia will continue to allocate 25-30% of revenue for CAPEX which will be invested in fibre infrastructure to expand its mobile business.

6. Debt-to-equity ratio remained stable at 1.0; the ratio has hovered between 0.9 and 1.1 in the last five years. Telekom Malaysia’s gross debt-to-EBITDA ratio is at 2.3, which is below the headroom guidance of 2.5 to maintain its investment-grade credit standing. Telekom Malaysia is currently rated A3 by Moody’s and A- by Standard and Poor’s.

7. Telekom Malaysia has a dividend policy of distributing up to 90% of their normalised PATAMI or RM700 million, whichever is higher. The total dividend paid in 2017 was RM811.7 million which is equivalent to 21.5 sen per share, the same as in 2016.