Bedok Point, one of the Frasers Centrepoint Trust’s (FCT) suburban malls located in the east of Singapore, has been losing its charm ever since a new shopping mall, Bedok Mall, located right next to Bedok Point, came into operation in 2013. The poor performance of Bedok Point is reflected in its net property income from 2012 to 2016:

Bedok Point was acquired from FCT’s sponsor, Frasers Centrepoint Limited (FCL) in 2011. Now everything seems to be going downhill after the change of ownership. On hindsight, it seems that FCT overpaid to acquire this property and the acquisition is no longer yield accretive.

Despite Bedok Point’s poor performance, several unitholders praised the management for doing a fantastic job at FCT. And it’s easy to see why – FCT has been rewarding unitholders with growing dividends over the last 10 years since IPO: 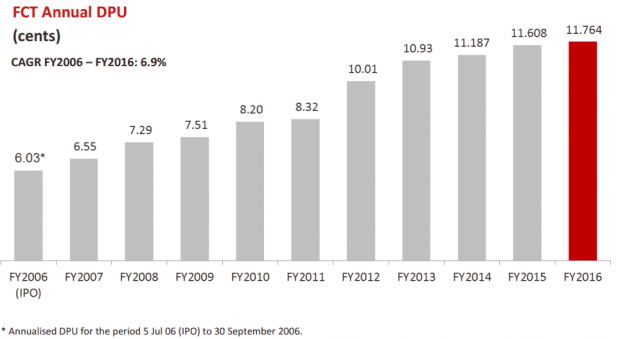 FCT’s historical DPU performance is remarkable considering the challenges the Singapore retail industry has been facing the past few years. But one struggling acquisition hasn’t impaired FCT’s performance thus far.

So how did the Bedok Point lose its charm?

According to Dr Chew Tuan Chiong, CEO of FCT, a suburban mall can be highly successful if it is large enough and close to an MRT station. When there was a land sale next to Bedok MRT station, they knew it was going to be a threat to Bedok Point. Unfortunately, their sponsor, Frasers Centrepoint Limited, didn’t win the bid.

Today, Bedok Mall is Bedok Point’s largest direct competitor as the former is more than two times larger and is directly connected to Bedok MRT and Bedok Bus Interchange. To make matters worse, the manpower crunch and poor retail sentiment in Singapore have hit tenants hard and cause others to slow their expansion plans. As a result, mall occupancies have dropped.

Dr Chew continued to explain why the management is having a hard time turning the asset around: “Some retailers in Bedok Point are doing well but because of the lack of manpower, they’ve had to consolidate and pull out from the mall. When you have vacancies at the mall, visitor numbers drop as there are fewer shops, and the vicious cycle follows.”

At this point, the management is still trying all means to turn the mall around, but the REIT would explore the options if it received any third-party offers to acquire the property. Luckily, Bedok Point constitutes only 3% of FCT’s total asset portfolio and isn’t going to affect FCT’s dividends significantly.

Here are some important things to take note:

Looking to invest in S-REITs? Find out how to identify the best S-REITs for your REIT portfolio.