Year of Mild Deflation in 2014

It is a well known fact that Singapore is the most expensive city in the world to live in. The recent strong Singapore Dollar has brought us to the number 1 spot in the world. You might not know this but our living standards actually got cheaper for the past two months of November and December 2014. Cheaper oil is one of the contributing factors to it and the inflation rate can be seen in the chart below.

We can see from the chart above that inflation peaked at 2.7% in May 2014 and there was disinflation until October 2014 with 0.1% inflation. This means that the price of goods and services increased at a slower pace since May last year. However for the past two months of November and December 2014, prices have actually gone down overall for us. The magnitude is mild at -0.3% and -0.2% respectively.

A closer look at the latest data available for December 2014 shows us a breakdown of the sources of falling and rising prices. Data from Statistics Singapore show that clothing and footwear, housing and transport were all cheaper by 2.4%, 1.4% and 4.1% respectively when compared to the same period last year. Items that were more expesnsive came from the categories of Food, Communication, Education and Stationery, Health Care and Recreation and Others by 2.9%,

The reason why economists are afraid of deflation is the idea that people will delay their needed expenditure when they expect goods and services to be cheaper tomorrow. This will be beneficial to the individual consumers but bad for the overall economy because the reduced demand will result in lower production and this will be embeded in lower salary and spike off another round of deflation. This is why Central Banks in Japan and Europe are so determined to ease monetary policy.

Unfortunately for Singaporeans, even as goods and services got cheaper, our wages also got lower on average as seen in the quarterly data below.

The wages data come from Statistics Singapore and it includes overtime wages. We can see that wages dropped by 14.9% from the first quarter high of $5108 to $4445 in the second quarter. Monthly wges continue to moderate by 0.03% to $4314 in the third quarter and these wages include total CPF contributions.

The good news is that as the labor market remains tight in Singapore, there will be a limit to the wage decline in Singapore. However it is clear that Singaporeans are not benefiting from the cheaper prices as their own income has dropped too. The Consumer Price Index in Singapore started out at 117.04 in January 2014 and it ended at 116.70. This means that the deflation for the whole year of 2014 stands at 0.0029% while wages dropped by 18.41% in total from the first to the third quarter of 2014.

While it is not clear whether our wages will rise in the last quarter of 2014 or this year in 2015, there are signs that the mild deflation condition might not continue for long this year. The mild deflation of 0.0029% last year can be largely attributed to sharp 60.9% drop in oil (using BRENT crude oil as benchmark) prices from $115 in May 2014 to a low of $45 in January 2015.

However this low oil prices eats into the revenue and profitability of oil producing companies and this will force them to close down oil rigs as it becomes increasingly unfeasible for them to operate. This has resulted in a turnaround in oil prices from the low of $45 to the current price of $58 as seen in the chart below.

The weekly chart shows that oil has rebounded in the past 4 weeks as oil rig count started to decline. For example, the recent report from Baker Hughes show that oil rig has fallen by 87 units to settle at 1,456 in the US after 10 consecutive weeks of decline. This continued decline in oil supply will continue to support higher oil prices in the future.

Of course, this is based on the assumption that the US will continue on its strong recovery which grew by 5.0% and 2.6% in the third and fourth quarter respectively. As the US economy recovers, US consumer will respond by purchasing better and bigger automobiles among other discretionary consumption items. This will drive up their demand for oil prices. Although the 2.6% growth may seem relatively weak, it should be noted that this is due to greater consumption of foreign goods which reduces the net export.

In addition, the US added 257,000 jobs in January 2015 and this is more than the 236,000 jobs expected after a strong 329,000 jobs added in December 2014. In this tight labour market, wages rose by 0.5% and it encouraged an additional 155,000 discouraged workers to re-enter the workforce. This pushed the unemployment rate up slightly from 5.6% to 5.7% but this is still considered a strong labor market. This strong labor market will also faciliate more consumption in the US and encourage the Fed to normalize interest rates from the current low price of 0.25%. This will increase financing cost and lead to more expensive oil as the cost is being passed on.

This is also based on the assumption that Europe does not implode on the Greece sovereign debt crisis. For those with are not familiar with the situation, I will give a brief background of it.

The Greek people are sick and tired of the austerity measures being imposed on them by their creditors for 5 years running. One quarter of the working age population and half of its young people has no jobs. Their future is bleak with no reasonable prospect of economic growth to lift them out of their despair. So they threw out the previous government in January 2015 and elected a new government, Syriza who promised that they will find ways to default on the crushing debt of $240 billion euros (at 175% of GDP and growing as we read due to interest payments) and spend more on social welfare programs.

This set the newly elected Greek government on a major collision course with the official debtors known collectively as the Troika. Greece has until the end of the month to borrow new money to pay their existing debt obligations and the European Central Bank has cut them off from using their sovereign bonds as collaterals for a loan. The creditors are not likely to give Greece an easy way out because they will suffer losses and set a bad precedent for other debtor nations like Portugal and Spain.

What Can We Do?

So to recap, we now know that we are faced with a number of unfavorable conditions. Although there is actually a mild deflation of 0.0029% last year, our wages dropped by 18% so whatever savings we could have gotten are overwhelmed by our loss in income for the average Singaporean. Looking forward, inflation could return as the era of low energy prices ends after seven months and it is set to continue higher.

The big question is how should we respond to this change in the macroeconomic conditions which we don’t have any control of? In my opinion, the only way where we can get ahead in this environment is to either increase our income or reduce our spending. There are a number of ways where you can reduce your spending, however this is not the focus of this article. I’d rather look at how to invest and increase your income in the future.

I would encourage a two-pronged approach to invest your way to prosperity in the context of today’s economy. One way would be buy a stake in a company who would directly benefit from rising oil prices. The other way would be to buy a company who would benefit even if oil prices were to remain around $60. It is estimated that oil prices need to rise above $60 for a critical mass of oil fields to be profitable if not oil companies will be struck in quagmire where they can neither expand nor wish to cut back supplies so much to lose market share.

It is likely that there are many companies out there that will fit the criteria but I am just going to share one for each of the two-pronged approach to give you an idea of what I am talking about. You can then search for other similar companies that might suit your investment profile.

The first would be a leading oil rig specialist builder like Ezion. If oil prices continue on its trend back up to $100/barrel, Ezion would receive more orders to build oil rigs and it would result in higher profitability assuming that they can keep cost under control in this condition. This is likely to play out in the 6-12 months time frame. The highlight of this company is that it is reasonably priced at approximately 7 times earnings, strong margins of 49% with a significant market capitalization of SGD1.94 billion at current price of $1.23. 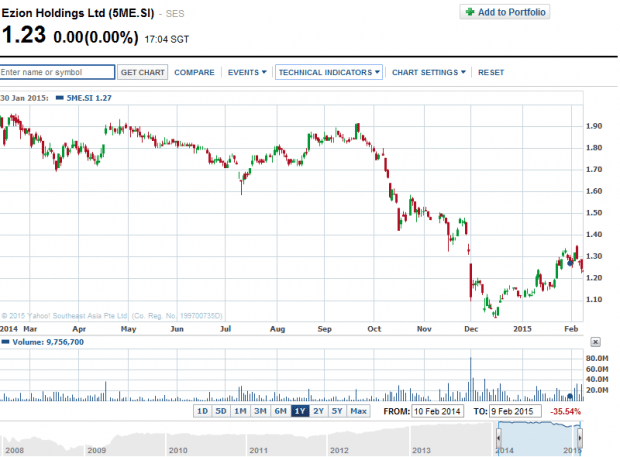 Like other oil related plays in the market, its price is pressured by the low energy price now and would provide an attractive entry price especially when oil prices revert to normal. It is also noteworthy that the company has increased its net income every year from 2010 to 2013. Yahoo Finance would provide you with more information to evaluate the company. Please do your own due diligence.

If you refer to the inflation chart earlier, you will see that there is a significant annualized 2.5% increase in prices for April 2014 compared to 1.2% annualized increase in prices for March 2014. A big chunk of it comes from the 6.6% increase in public transport prices that month in April 2014. While we have a first class public transport infrastructure in Singapore, the companies that run them also have a first class financial statement. If you were to refer to Yahoo Finance on SBS Transit. SBS experienced declining profitability prior to the bus fare increase. However if we were to look at the last four quarters of its income statement, we will see an ideal picture of increasing revenue coupled with an increasing profitability of 2 million, 3 million, 5 million and 6 million SGD. This shows that SBS is able to control its cost even as its revenue increased.

While the Public Transport Council is set up to protect consumer interest, it is not likely to let public transport companies like SBS or SMRT enter into an extended period of unhealthy profitability before they rise rates. So this is a quite a sturdy moat for them and while you can’t pay lower fares when you pass through the gantry gates, you can still profit from it as an investor.

SBS is expensive at 38 times earnings and it has a low profit margin of 1.70%. The low profit margin also means that it is much harder for other bus operators to break into the mass market bus and rail market among other factors restraining them. SBS also has a strong market capitalization of SGD608 million based on current price of $1.97 and 5 cents of earnings per share. SBS share price has experienced strong growth momentum over the past few months. 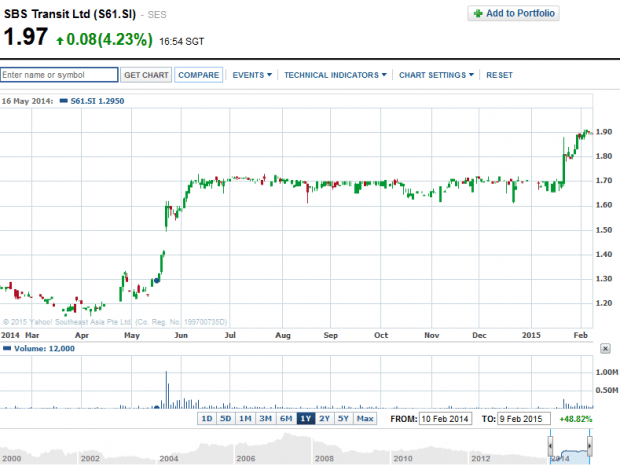 In any case, SBS is just an example and you can go through transport/utilities companies in Singapore who will have the same moat as SBS. In the same spirit, one can also find a better substitute for Ezion in the oil and gas industry in Singapore based on different perception on potential growth. For investors who are more open to foreign opportunities, they can also seek exposure to the US equity market especially at a time when the USD is strengthening against the SGD.