Singapore’s Central Provident Fund (CPF) has leapfrogged over Canada Pension and PFZW of the Netherlands to become the eighth-largest pension fund in the world, with assets worth some US$211.4 billion ($286.8 billion) as at Dec 31, 2015.

This is according to research released on Monday by US investment newspaper Pensions & Investments and global advisory firm Willis Towers Watson. 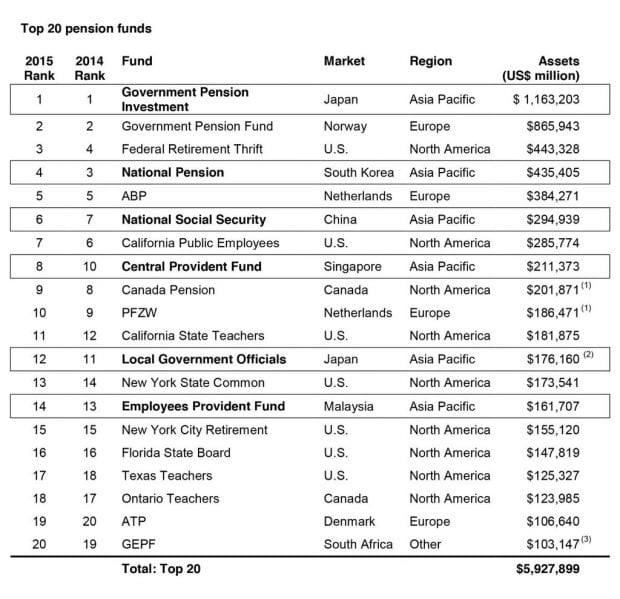 In the Asia-Pacific region, CPF ranks as the fourth-largest pension fund, behind Japan’s Government Pension Investment with US$1.2 trillion, South Korea’s National Pension with US$435.4 billion, and China’s National Social Security with US$295.0 billion.

Asia-Pacific, however, saw an increase of around 1% during the year.

In the five-year period from 2010 to 2015, Singapore’s CPF grew 7.9% in US dollar terms – the fourth-highest growth in the top 20 funds globally. In local currency terms, Singapore funds experienced growth of 10%.

The highest growth in the top 20 funds globally in US dollar terms was experienced by China, which gained 17.8%, followed by the funds in Norway up 9.5% and South Korea up 8.5%.

“It has become clear that good investment governance is the key determinant in producing the competitive edge necessary to transform portfolios and succeed in the ever-evolving mission of trying to pay benefits securely, affordably and in full,” says Naomi Denning, managing director of Investments for Asia Pacific at Willis Towers Watson.

“There has been a fair amount of movement in the ranking in the past five years with winners likely being determined by having fully diversified portfolios that perform well in times of stress and a focus on total rather than relative returns,” Denning adds. “Another differentiator of leader funds is their ability to innovate or be an early adopter; critical in such a persistently low-growth environment.”

This article first appeared in The Edge Singapore Market Report.

The Edge Markets helps its readers to make better business and investment decisions by empowering them with the latest financial news, data and analytics. The Edge Markets is part of The Edge Media Group.