Once again, we have the latest economic report about Singapore’s economy from the Ministry of Trade and Industry (MTI). MTI reported GDP growth for the full year of 2014 together with the first quarter reading of 2015.

Another Stellar Year of Growth for 2014

Singapore grew by a robust 2.9% in year 2014 by both measures of yearly and quarterly annualized growth. This is robust considering the weakness in the global economy where China missed its 2014 growth target of 7.5% by 0.1%. Europe was struggling with growth and its GDP grew by a mere 0.9% and Japan even contracted by 0.8%. The United States was the only bright spot among major economy with GDP growth of 2.4% last year. With this high benchmark in mind, we can be happy with our growth of 2.9%. We can now take a look at the breakdown of the growth in Singapore’s economy. 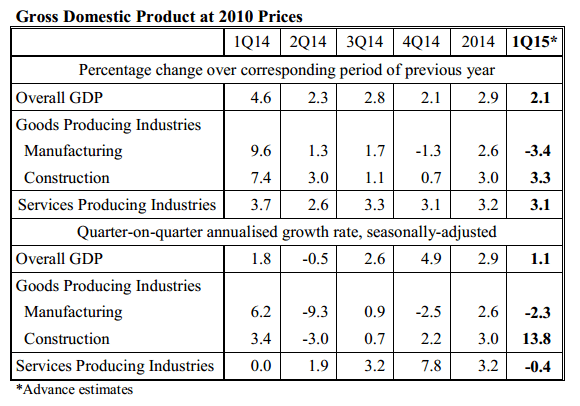 This table is extracted from the MTI report which is a nice summary of the two-page report. Approximately 85% of Singapore’s manufacturing is destined for the overseas market and it is impressive that we managed to grow our manufacturing by 2.6% last year in the face of poor economic growth in our major export markets. This points to the competitiveness of the exports that we produce. However manufacturing shrunk by 3.4% in the first quarter of this year as US growth weakened in the first quarter together with continued weakness in other major economies. It remains to be seen if growth will pick up next quarter.

The services industry is a bright spot with its consistent performance throughout the year. 70% of the working population in Singapore is employed in the service industry and this consistency of growth provides opportunity for new graduates to enter the labour market.

If we were to take step back from the quarterly GDP growth of Singapore to eight years ago before the world experienced the worst ravages of the Great Recession from 2008-2009. We can see that Singapore has grown consistently despite those tumultuous years. The Singapore GDP chart below shows the consistent growth of our economy from year 2006 to 2014.

Singapore’s GDP measured in USD did not drop during the last eight years! The worst was in year 2010 when it inched up marginally when the world was caught in the aftermath of the US Credit Crunch and Europe was opening up a new front with the brewing Greek bad debt crisis. On a side note, the Greek crisis has not been resolved and it is going to be a long running saga for international finance.

We note that Singapore’s GDP almost broke through the $300 billion level last year which is impressive for an island with a population of 5 million and 716 square km of land. Normally when there is such impressive GDP growth, we have to live with the trade-off of higher inflation. The simple reason is this economic growth puts a strain on existing resources and more money has to be paid to extract further output. It is like a departmental store which decides to extend its opening hours due to overwhelming demand for its products. In the short run, it will have to pay its staff extra (1.5-2 times the hourly pay) to work overtime and this increased cost is then passed on to consumers.

However we have a unique circumstances in Singapore where we are faced with deflation as the rest of the world is faced with an oversupply of oil. Of course, this low energy price will not last forever as producers are incentivised to drill for less oil when they get paid less for each output. Still this will not happen overnight and we can enjoy the deflationary environment while it lasts.

Economists fear deflation because consumers will be tempted to delay their spending as they anticipate lower prices in the future. This will reduce the incomes of retailers and they will order less goods and services and producers will be forced to retrench workers. Workers are also consumers and they will be fearful of their jobs. They will respond by reducing their spending and this will deepen the vicious cycle further.

Luckily for us, this is not happening as we can see that consumer spending remains on the uptrend as seen on this chart below.

As consumption remains steady, we can assume that the domestic economy will not be disrupted internally from deflation. In other words, we can stretch our money further as long as this environment persists. In the macroeconomic picture, this deflation is allowing Singapore to be slightly more cost competitive against other countries.

While Singapore may have grown steadily and substantially over the past eight years, we cannot assume that the benefits have been shared equally among all. I have an interesting chart below which shows the average wages by industry to illustrate this point. It may be slightly dated to year 2010 but the general premise that how much you earn depends on your industry still holds true even today. 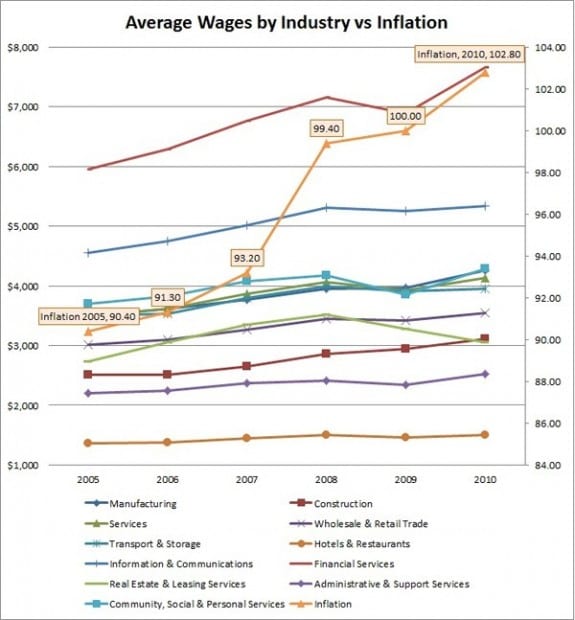 For example, it you are working in the hotel and restaurant industry, you can always expect your pay to fall behind inflation. Basically it would stay flat at below $2,000/month on average. Of course, if you are the general manager of Four Seasons, you can easily earn five-digits a month or more but if you are the receptionist or the waitress, then you can expect your pay to stay flat at around $2,000-$3,000 if you are lucky. This is why the vast majority of these jobs are filled by foreigners as you don’t have the skillsets accumulated over the years to command a better salary.

Now even if Singapore were to grow by 20% this year, would you think that your salary would grow by a similar amount? I didn’t think so. From the employer’s perspective, why pay more when they can hire cheaper labour from hungry foreign talent or a new batch of youngsters. Of course, this is an unfair world and choosing the right industry while building a valuable skillset is important.

There is a better way to ride on the sustained growth in Singapore than to rely on your boss to increase your salary. You have to keep in mind that employers have their profit margin to consider and they are not going to overpay you if they can help it. The realistic growth range in Singapore this year according to MTI is at the 2-4%. If you are in mid-career where everything is more or less settled, your next realistic pay increment would be 1% if the economy grows by 4%. Above a certain range, you can expect to be retrenched if companies embark on a cost rationalization exercise. Banks are notorious for that and they still attract the young and brightest every year due to their high pay scales.

A better way to ride on the Singapore economy’s growth would be to invest in blue chip companies in Singapore. All these cost savings have to go somewhere and for listed companies, a good portion will go to shareholders. For blue chip companies, they have important shareholders who are likely to be institutions themselves and they hold the same common shares as you and me. If management decides to enrich themselves unfairly instead of paying dividends, it will catch their eyes and action will be taken to restore equity between shareholder and management incentives.

Also these blue chips are the champions of their respective industries in Singapore and they are likely to attract talent to work for them. These companies have endured for decades and are likely to do so further in the future compared to a start-up. Their products and services are likely to remain competitive relative to evolving consumer taste and requirements. In other words, these blue chips would be able to tap onto the growth of Singapore’s economy effectively and in a cost efficient manner.

Riding on Singapore’s Growth with the STI

Over the long run, as a shareholder, you will be able to share in this growth just by holding onto your shares. You will be entitled to regular dividends in addition to the share price appreciation. Of course, you cannot expect the price to shoot up in the short term (1-3 months) but prices can be expected to be a path of steady appreciation with a bit of volatility involved. 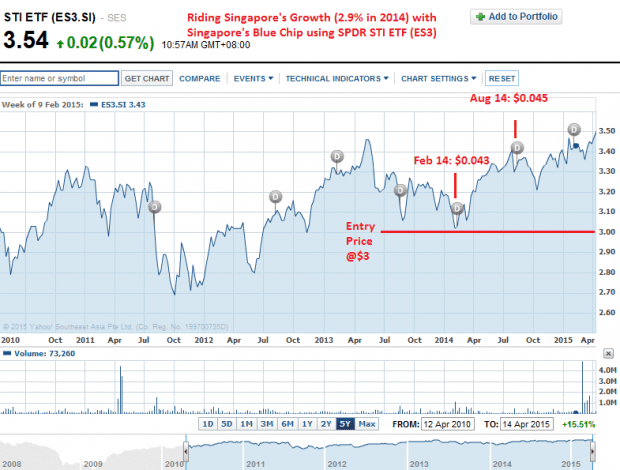 We can see an example on the chart above. The SPDR STI ETF (SGX: ES3) is listed on the Singapore Stock Exchange. It tracks the Straits Time Index (STI) and contains all the household blue-chip names in Singapore such as SingTel, DBS, UOB, Keppel Corp, CapitaLand and 25 others across various industries. By purchasing the ES3, you are effectively purchasing the performance of the entire Singapore’s economy in one go.

Capturing Singapore’s Growth 1-for-1 and More!

Think about it, Singapore grew by 2.9% in 2014 and you collected 2.93% in dividends just by sitting back and investing in the ES3. That is not all. ES3 closed the year at $3.40 which means that your total returns for year 2014 including dividends and capital gains is $0.488 or 16.3% (based on $3 cost per share). Isn’t that way better to ride on Singapore’s growth rather than vainly hoping for your salary to grow in line with it?

Yes, stock prices may be volatile in the short term but if you have confidence in Singapore’s economy like I do, then the wise thing to do will be to buy and hold for the long term and live of Singapore’s prosperity. If you do not have the cash on hand, you can always do it with your CPF savings (ES3 is on the approved list) and hold it until your retirement. That is all for today and may you have a fruitful investment journey for your financial independence and early retirement!

Wondering about ETFs? Find out more with our Simple 4-Step Introduction to ETFs