The cost of money is an important subject for most Singaporeans because we borrow heavily to finance the lifestyles we live today. For example, for a newly wedded couple who buy their own home are likely to borrow up to 20 times their annual income to purchase their first property, be it a condominium or public HDB flat. Some of us might also want to borrow further to purchase a car for lifestyle reasons as long as the total monthly debt payment does not exceed 60% of your monthly income under regulations.

Fixed-term mortgage repayments are gone in Singapore these days due to Federal Reserve decisions back in the 1980s for complex reasons that are beyond the scope of this article. Today the nearest mortgage package to a fixed-term package is the 5-year POSB HDB Loan program with interest capped at 2.5%.

For the rest of the banks, you can only fix your rates for the next 2-3 years before your rates are at the mercy of global interest rates. Hence interest rate movements are important to us. Consider that a 1% change in interest rate would mean a difference of $10,000 per year on a $1 million mortgage. That is enough to finance a one-week trip to Europe. If you can fix your interest rates for three years when rates rise a percent, that means at least $30,000 in savings! Keep in mind when interest rates rise, it is part of a trend. They are going to rise for several years as we are at the initial stage now and the savings would be cumulative.

The latest important monetary policy decision from the Federal Reserve comes from the Federal Open Monetary Committee (FOMC) statement which was released after their two-day meeting on 17 June 2015. As customary, the FOMC provided their assessment of the US economy. The FOMC expected moderate expansion of the US economy – one notch down from strong expansion used to describe the state of the economy in 2014.

The 0.7% contraction for the first quarter of 2015 was insignificant to the Fed. The reason behind that was a harsh winter during that period and a serious strike in the West Coast. Both events are behind us now. On the all-important labor market issue, I am quoting how the FOMC described it:

“The pace of job gains picked up while the unemployment rate remained steady. On balance, a range of labor market indicators suggests that underutilization of labor resources diminished somewhat.”

Despite the consistent progress in the labour market, the Fed remains cautious in its assessment. The US labor market made strong progress in May 2015 as measured by the Bureau of Labour Statistics. The US added 280,000 new jobs alone in May 2015 compared to a revised 221,000 new jobs in April 2015. The chart below shows the consistent expansion of the new jobs in the United States.

There are some months where actual new job creation came below expectations but never once for the past five years has the US not created new jobs. The unemployment rate held steady at 5.5% as the US added jobs mainly in the services sector such as healthcare and professional services while the mining sector declined due to low energy prices.

In Singapore, before you get married, you would first appear before the HDB officer for a first appointment where they access your financial standing. Either one of you would be required to have worked for 12 consecutive months with income documents such as your CPF statement as proof before they allow you to pay the 10% deposit to book a flat. This is to ensure that you have the means to pay for the flat when it is ready five years later.

It is similar in the US. They may not have to wait for five years but they would still need to have a job before the banks are willing to extend a mortgage to them. The era of no income, no jobs, application only (NINJA loans) from 2004 to 2007 died with the bursting of the housing bubble in 2008 when homeowners defaulted on their mortgages. Many notable banks such as Washington Mutual and Lehman Brothers collapsed which triggered the Great Recession. Financial regulations and supervision have been tightened since and the banks learned their lessons.

So the housing market went dark from 2008 to 2013 even as housing prices recovered gradually. It is only last year in 2014 that we saw signs of life in the housing market. The labor market had been recovering for a while by then and young people were more financially confident to either buy or rent houses. Either choice requires some significant financial commitment. In May 2015, the National Association of Home Builders (NAHB) index in the United States hit a new high of 59 as home builders saw more orders coming through for new homes all over the United States.

The purchase of a home is the single most important trigger of consumption as material goods are required to supply and furnish a home. This applies to Singapore too where we are prepared to spend $50,000 for renovation and furniture to transform a concrete box into a love nest. This greater consumption in the United States will further boost its economy.

The FOMC acknowledged the growth in household consumption and the housing sector but there are also weaknesses in net exports and business fixed investments. However no economy is perfect. There will always be areas of strength and weakness changing over time. This does not mean that the Fed would have to wait until everything is perfect before making its move. 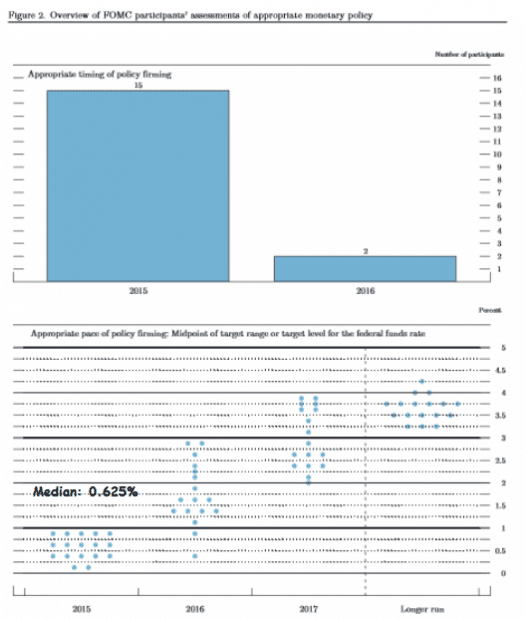 We can see this from the projections of the 17 members of the FOMC. 15 out of 17 member agreed that rates should be increased this year. The median rate estimated by the end of the year is 0.625%. The current interest rate range is 0 to 0.25% which means that the median rate is 0.125%. Considering that each rate hike is typically 0.25%, this means that there are likely to be at least two rate hikes before the end of the year — a rise of 0.5% overall. So far the likely two dates are in the month of September and December.

As long as the US economy continues on its steady growth path, the Fed would likely reach its stated price stability target of 2% inflation within the medium term. Medium term is defined as over the next 2-5 years. This would give it the impetus to hike rates later this year as it is estimated that it would take at least 18 months for the rate hike to be fully felt in the US economy. However in the case of the Singapore Interbank Offer Rate (SIBOR), it would react immediately. Most of us have our mortgage benchmarked against the 3-month floating SIBOR and this means that we will see our mortgage repayments increase in the next three months.

The only sensible thing to do in a rising interest rate environment is to refinance and fix your mortgage interest rate for as long as possible. The earlier you do that, the more you save. REITs might fall in price as the market searches for yield and uncertainty over its interest expenses. Most REITs would have at least fixed 80% of their interest rates but it is the 20% that might possibly affect their quarterly dividend pay-out.

The picture will become clearer next year after the Fed has raised its rates and provided more clarity about their interest rate projections. When interest rates actually raise, we can see which REITs hedged their interest rate exposure properly and which are the ones that reduce their dividend payments. We can then separate the wheat from the chaff and make better investment decisions.