Singapore’s REIT market will soon welcome a new member – Sasseur Real Estate Investment Trust – which will become the very first ‘outlet mall’ REIT to be listed in Asia. Just two weeks ago, Sasseur REIT lodged its prospectus with the MAS for an initial public offering of 13.8 million shares to the public at 80 cents each. If you’re interested, you can download and read the prospectus here (all 728 pages of it!). 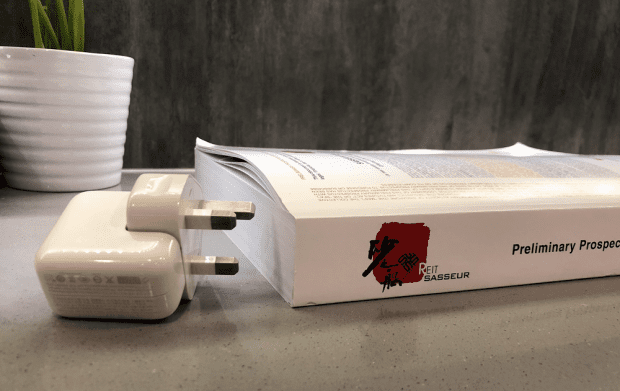 You only have a couple more days to consume it though, before applications for the IPO close on Monday, 26 March 2018, at 12 p.m. But if you don’t have the time to read all 728 pages before the deadline, let me help you out since I’ve gone through the document myself and was fortunate enough to be invited to the Sasseur REIT IPO roadshow recently. 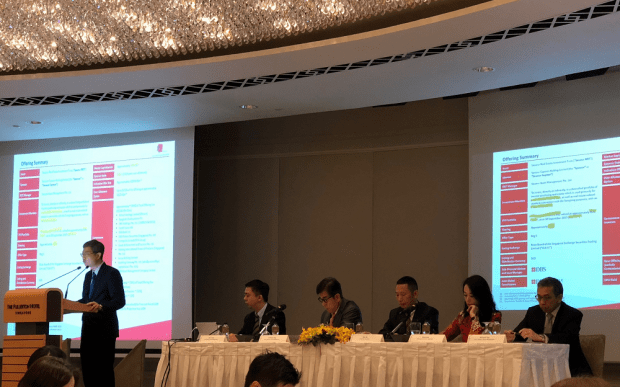 Here are five key things to note about the Sasseur REIT IPO before you invest:

1. First outlet mall REIT to be listed in Asia

Sasseur REIT will own an initial portfolio of four outlet malls upon listing. The four outlet malls located in China have a total net lettable area (NLA) of 304,573m2 square metres and are collectively valued at RMB4.89 billion (S$1.48 billion). For comparison, the total NLA is approximately three times the size of VivoCity, the largest mall in Singapore.

Here is a summary of the four outlet malls:

So what is an outlet mall? An outlet mall typically sells discounted out-of-season branded goods. The mall is usually located outside of prime locations, but easily accessible by car. In Sasseer REIT’s case, its outlet malls are all situated within an hour’s drive from the city centre and features brands like Gucci, Coach, Michael Kors, Bally, Nike, Adidas, Calvin Klein, etc. The table below lists a summary of the typical differences between an outlet mall, department store, shopping mall, and e-commerce in China:

According to the IPO prospectus, the first outlet mall in China was launched only 15 years ago. Since then, the industry has grown rapidly alongside China’s burgeoning middle class. From 2012 to 2016, the compound annual growth rate for outlet store sales in China is 31%. Despite the rapid growth, there is still a long way to go — China still lags the U.S., Europe, and Japan in terms of the number and size of its outlet malls.

Among Sasseur REIT’s four outlet malls, Chongqing Outlets is the largest in its portfolio. The mall contributed 71.4% of total property income in 2016: 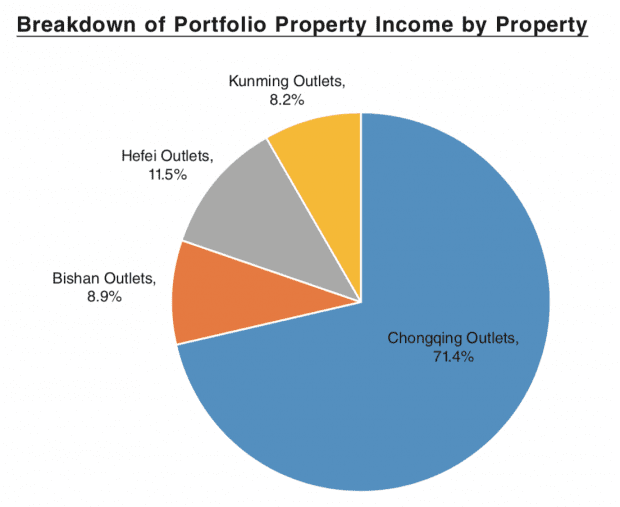 Despite contributing the majority of Sasseur REIT’s property income, Chongqing Outlets only comprise 36.2% of its portfolio valuation: 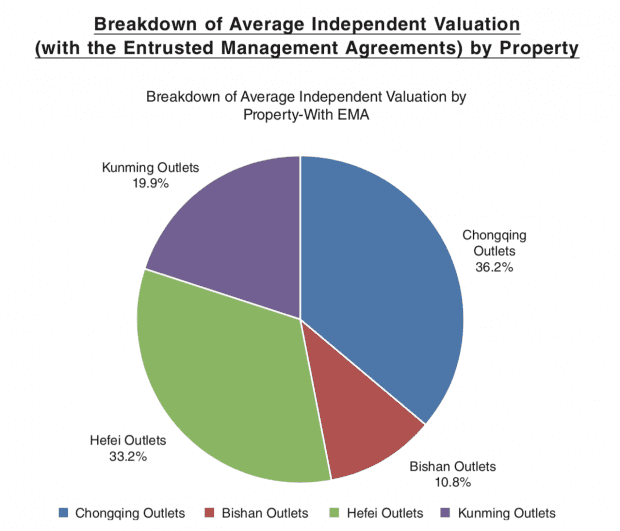 Chongqing Outlets is considered a mature asset as it sales growth slowed to 6% in 2016, while Sasseur REIT’s other outlet malls are still relatively new with a longer runway to grow tenant sales: 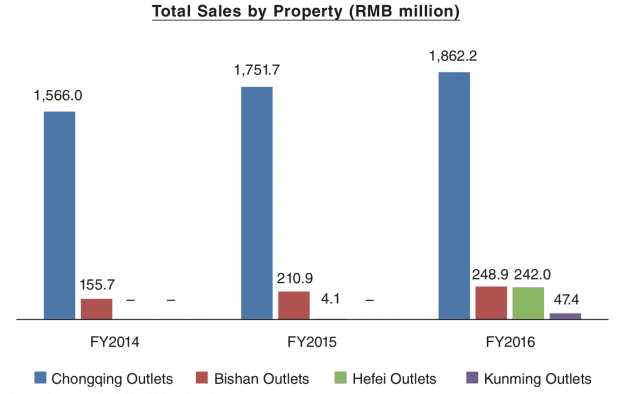 Sasseur REIT’s property income is well-diversified across different trade sectors and no single tenant contributes more than 2% of total sales: 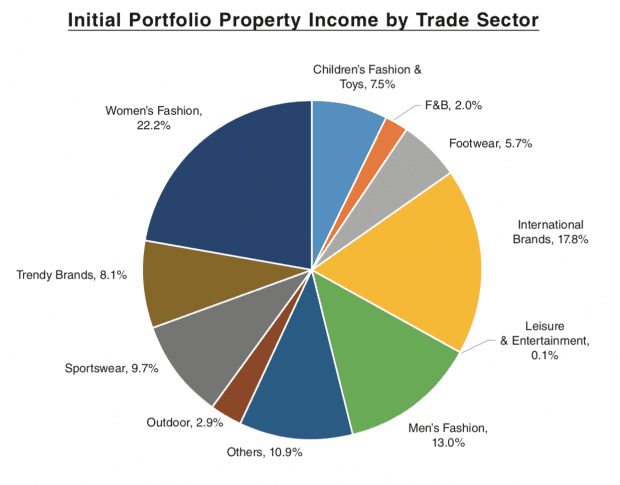 Portfolio occupancy rate has steadily improved to 91.8% as at 30 Sep 2017 as the newer malls like Hefei and Kunming Outlets pick up their leasing activities:

The portfolio weighted average lease expiry as at 30 Sep 2017 is relatively low at 1.2 years compared to a typical shopping mall lease which is usually around two years.

Unlike a typical lease where a landlord earns the bulk of its rental income by leasing out space for a fixed rent, Sasseur REIT earns most of its income based on tenant sales. If a tenant performs well, Sasseur REIT will receive a higher rent, and vice versa. In essence, Sasseur REIT’s business model is driven by tenant sales, not by fixed rental leases. Any fluctuation in tenant sales directly will affect Sasseur REIT’s income. For 9M 2017, Sasseur disclosed that 90% of its income is derived from sales-based leases while the rest come from fixed leases from food operators, cinemas, and entertainment providers.

Since REITs are well-known and sought after for their stability, it would be hard to classify an outlet mall operator like Sasser REIT as a stable asset. So to list Sasseur REIT, the management has structured a unique lease agreement called the Entrusted Management Agreement (EMA).

According to its prospectus, the EMA will provide downside protection while allowing investors to enjoy potential upside from the sales performance of the outlet malls. Under the agreement, an Entrusted Manager will be appointed for a period of ten years (with an option to extend another ten) as an operator to actively manage the outlet mall and collect all sales-based lease income. In turn, the operator will then pay Sasseur REIT a larger proportion of fixed rental income and a lower variable income.

For Sasseur REIT’s 2018 forecast, fixed rental income is expected to contribute around 67.4% of total rental income (not exceeding 70%). Beyond 2018, Sasseur REIT expects its fixed rent component to grow at 3% annually. The rest of the income comes from the variable component where Sasseur will earn a percentage of tenant sales. By doing this, Sasseur REIT will behave like a stable REIT with a fixed base rent and yet enjoy some upside from the variable rent. 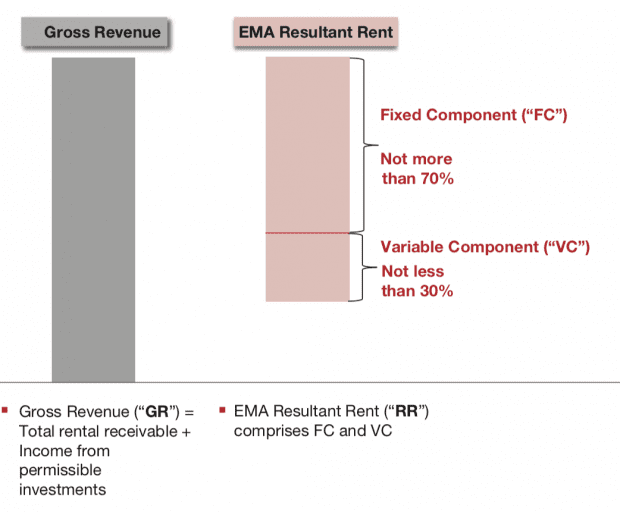 In essence, the EMA structure allows the operator to be like a master tenant on a triple net lease. The operator will first collect its share of gross income from tenant sales (10-16% of gross sales). The proceeds will then be used to pay Sasseur REIT the agreed fixed and variable income components. Sasseur REIT will then pay distributions to its unitholders net of manager and trustee fees, finance costs, and other related charges.

Now what if tenant sales don’t perform and there is a shortfall in variable income? If the amount payable to Sasseur REIT falls below a minimum rent, its sponsor, Sasseur, will cover the shortfall in income. This guaranteed minimum rent will only fall away if the four outlet malls achieve the forecast target rent for two consecutive years: 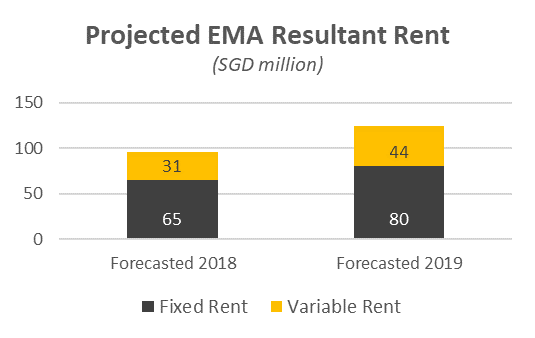 Although this structure is clever as it protects unitholders’ downside while allowing them to enjoy some upside, I think the biggest risk for Sasseur REIT will come from counterparty risk. This risk applies to any master lease structure out there and Sasseur REIT’s distributions will be impacted if:

That’s where the role of a good sponsor comes into play. Upon listing, the sponsor, Sasseur, will still be the single largest unitholder with more than a 50% stake in Sasseur REIT. Obviously, it is in the interest of the sponsor to ensure Sasseur REIT continues to perform after its IPO. Having its skin in the game and a successful track record of managing outlet malls in China means Sasseur has attracted some famous cornerstone investors like Charles & Keith (under CKK Holdings) and JD.com for the Sasseur REIT IPO.

Sasseur also currently manages nine outlet mall and owns six of them, so we can probably expect a pipeline of future acquisitions for Sasseur REIT from the sponsor’s existing assets. At the roadshow, the management of Sasseur REIT emphasized that they will only acquire these assets when they are yield-accretive to unitholders.

The management will be paid a base fee of 10% of distribution income and a performance fee of 25% of the difference in incremental distribution per unit (DPU). In other words, the management only receives a performance fee if Sasseur REIT’s DPU grows. I personally think the fees are in good alignment with the interests of unitholders. The key people in management include Anthony Ang (Former CEO of Fortune REIT), Richard Tan (Former CFO of ARA Private Funds) and Ken Chew (Former Vice President of Capitaland Malls Asia).

Here is the forecasted sales and rental income for Sasseur REIT:

Based on its forecasted financial performance, unitholders can expect to receive a distribution yield of 7.5% (DPU of six cents). But if we exclude the financial support from the sponsor under the EMA agreement, the actual yield works out to around 6.1% (4.88 cents).

According to the management, Sasseur REIT’s gearing ratio expected to be around 33%, which is still some way below the regulatory limit of 45%. As 25% of its debt is denominated in Singapore dollars, any current volatility with the renminbi may affect interest payments. Likewise, as the REIT collects its rental income in renminbi but pays distributions in Singapore dollars, there will be exchange gains/losses from time to time. So if you’re considering whether to invest in Sasseur REIT, you need to take this into consideration before making a final decision.