It’s high time someone talks about the elephant(s) in the room (Singapore) that has been the talk of this election and conspiracy theorists: Temasek Holdings and GIC.

Sovereign wealth funds (SWFs) have been accused of having hidden agendas, being state economic weapons. At the same time, they’ve also been hailed as saviors, buoying up banks during the financial crisis when capital markets were frozen.

Singapore isn’t the only nation with a SWF; many other nations (mainly net exporters) that enjoy current account surpluses and hoard reserves have a SWF as well.

SWFs manage vast amounts of money, also often seen as the true lender of last resort in its home country. The below table shows the world’s largest SWFs: 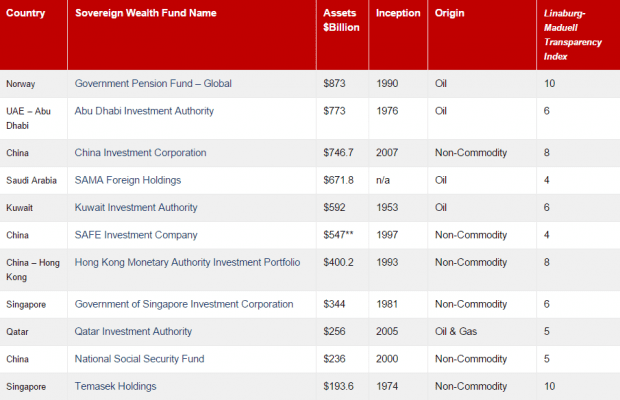 For a small country like Singapore to have two funds that high up in the list says a lot about how we manage our monies considering that we have no natural resources.

What do SWFs do?

Wealth Management of the State’s Holdings

In Singapore’s context, Temasek is in charge of this — holding large stakes in various corporations, sometimes majority-stakes to prevent complete foreign takeovers of Singapore’s biggest companies. An example would be their majority shareholding in Singtel, SMRT and ST Engineering. It has commercial principles and is relatively a more active investor than GIC.

Temasek is incorporated under the Companies Act as an investment holding company, therefore its sole shareholder is the Ministry of Finance. The government however, is not involved with Temasek’s day-to-day operations; that is left to the professionals they hire to manage their monies. Temasek itself doesn’t dictate decisions in its portfolio companies.

Temasek has since expanded away from Singapore by acquiring stakes in foreign entities such as Alibaba and it has an enviable private equity (PE) track record that has catapulted them into the leagues of the big boys, sometimes going it alone and bidding against the best in business like Blackstone, Carlyle and KKR.

An example would be Temasek’s recent PE venture with MBK Partners to acquire Tesco’s South Korean unit for S$8.6 billion, wrestling the deal away from KKR-Affinity Equity Partners, and Carlyle Group-GIC.

Moreover, Temasek’s more active role in investing has seen it increasing its stake in the Industrial and Commercial Bank of China in the aftermath of a huge correction in the Chinese markets. Is it a shrewd or a risky investment? Only time will tell.

They have made mistakes in the past and were very publicly lambasted for it, but looking at the bigger picture, Temasek’s returns are enviable: 7% total shareholder return over 20 years vs Singapore’s 20-year annualized core inflation of under 2%.  Just this year, they’ve returned 19% over a risk-adjusted hurdle rate of 8%.

Protection and Growth of Reserves

Being more conservative than Temasek, GIC’s returns are naturally conservative as well but outperforms global inflation which is used as their performance benchmark. As of 31st March 2015, GIC has achieved a 4.9% average annual real return above global inflation. Considering that Singapore is in a deflationary environment, benchmarking GIC’s returns to a local context would yield even higher returns.

GIC is less transparent than Temasek for the obvious reason of national security, the same reasoning why MAS doesn’t disclose which currencies are used in the basket used to price the Singapore dollar. Therefore they’ve not gotten the same transparency rating as Temasek Holdings.

In a welfare state like Norway where pensions are of utmost importance, the Norway oil fund uses revenue from its petroleum exports and interest gained from financial activities to fund their citizens’ pensions.

The majority of the Norway oil fund’s investments are in fixed income, which is generally safer than equities. They’re way more conservative than Singapore’s two SWFs in that they do not engage in private equity and venture capital investments, this however limits their returns severely. An interesting note on what they do differently from most other SWFs is their social stance.

It has taken an active role, sort of like an activist, to ensure the companies they invest in have good corporate governance and minimize environmental damage or risks. As such, they’ve recently divested all interest in coal companies around the world, they’re also not allowed to own stakes in tobacco companies and several defense companies for direct and indirect manufacturing of nuclear weapons such as Boeing and EADS.

What do I do as an Investor?

Does being government-owned mean an investment is safe? Many investors blinded by confirmation bias would mentally argue that a Temasek or GIC-owned stock will never go sour. Do NOT blindly chase SWF investments. Some have gone awry, destroying wealth such as Chartered Semiconductors, STATS ChipPAC, UBS, and Citigroup.

Taking Citigroup as an example, GIC initially suffered a huge loss in Citigroup during the crisis, but have since recouped all losses and profited handsomely to the tune of $1.6 billion. Because you’d have differing investment goals, risk horizon and holding power from the SWFs, you might not have the ability to tolerate massive losses and keep your sanity, especially in acute situations like the global financial crisis.

Another example would be that of Alibaba. Temasek is a major shareholder of BABA and if you’ve bought into the hype of buying anything “state-backed” and purchased BABA shares at IPO or chased it higher, you’d now be suffering massive losses. However, Temasek is still sitting on a huge capital gain. Why? Temasek is an early investor in BABA before it was even listed, buying a US$1.6 billion stake in 2011, valuing it at US$32 billion back then. Even after the recent stock rout, Alibaba’s market capitalization still sits at roughly US$150 billion, giving Temasek a 468% paper gain.

Always do your own due diligence. If a sovereign fund is accumulating shares in a company, no one can fully understand its intentions as it’s not as straightforward as an activist hedge fund manager. It’s almost impossible to gauge whether an SWF-backed stock is worth buying.

Now to address the elephant in the room: Many blogs have falsely accused Temasek of using CPF monies to invest, but they’ve failed to look at the other direction — GIC. GIC has explicitly stated in their website that they do indirectly manage some CPF monies. Quoting directly from their website:

“GIC, along with MAS, manages the proceeds from the Special Singapore Government Securities (SSGS) that are issued and guaranteed by the government which CPF board has invested in with the CPF monies. So while the CPF monies are not directly transferred to GIC for management, one of the sources of funds that goes into the government’s assets managed by GIC is the proceeds from SSGS.

The Ministry of Finance has also elaborated on this:

As a Singaporean, if you’re curious of where our SWFs invest, read business news regularly, and for Temasek, you can actually check their quarterly 13F filings in the US to see their latest trades in the U.S. markets.