Since news that the first case of Ebola was confirmed in the US, shares of Lakeland Industries (NASDAQ: LAKE) have risen by 317.27% in two weeks (Sep 30-Oct 13). The company manufactures and sells hazmat suits used by healthcare workers to prevent contact with diseases. 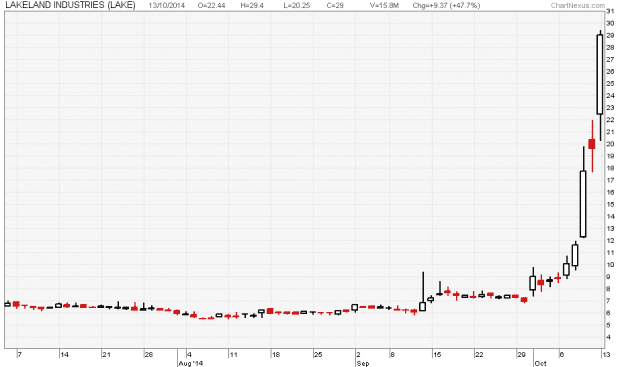 This is by every definition what you call a “hot stock”. Now if you were to jump in blindly, without any due diligence, just because this particular stock has returned over 317% in a couple of weeks, you could get burned.

When news of this stock broke, I was naturally curious and decided to delve a bit deeper and do a quick check on Lakeland Industries. I used a method we teach in the Investment Quadrant called the “30-second filter”.

If a company can’t even pass this basic filter, we leave it aside and we move on to the next investment idea; there’s no point even analysing further. This saves us precious time and effort. But if a stock does pass the filter, we then run it through a full analysis using the Investment Quadrant to decide if it’s a good investment or not.

So let’s see what I pulled out for Lakeland Industries.

From the data above, you can tell that…

So just from a quick glance at Lakeland’s financial performance and ratios, besides its low debt levels, it’s easy to tell that this company hasn’t been doing well at all the last ten years.

So why then would the stock jump by 317% in just two weeks?

In other words, Lakeland hasn’t actually secured any contract yet and the fundamental value of its business remains the same, but its market cap has more than quadrupled simply based on speculation that it will be a big winner in this Ebola outbreak. 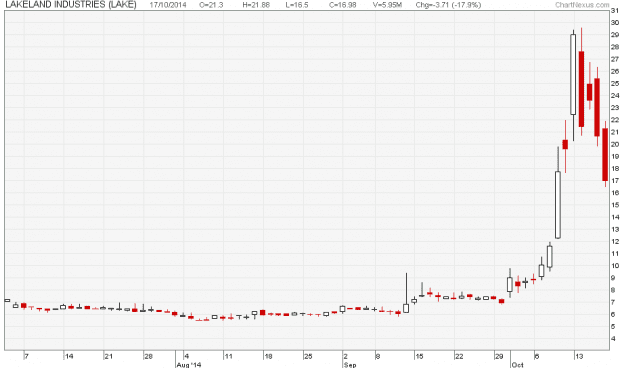 Right now, no one can predict which way this stock is going to go. From what we’ve seen, it’s pretty clear Lakeland’s business fundamentals do not support its sky-high stock price right now and we could already be seeing it come down to where it came from.

At the same time, I wouldn’t be surprised if Lakeland goes on another rally if fear of the ebola outbreak escalates. But even if it does, sooner or later the bubble is going to pop if there are no fundamentals to support the valuation of the stock and when the speculation eventually runs out.