Question: How is the palm oil industry going to perform in 2018?

I believe there are two different approaches to answering the question above. Firstly, for most, the follow-up question is: “Where would the price of crude palm oil be in the next 6-12 months?” A higher crude palm oil price would see palm oil companies benefiting from higher sales. This seems logical but this view is short-term and involves speculating on an event (a rise in crude palm oil prices) which may or may not happen in the near future.

Secondly, for savvy investors, their focus is not on the short-term price movements of crude palm oil. Rather, they would ask: “Is this palm oil company able to make sustainable profits whether crude palm oil prices are high or low?” With that perspective, the objective becomes finding companies that are able to generate consistent returns in the midst of market uncertainties.

Here’s an example: For the past 10 years, the price of crude palm oil has been rather volatile, ranging as low as RM2,000 per metric ton (MT) to nearly RM4,000 per MT.

Here’s where I introduce United Plantations Berhad (Bursa: 2089) as my case study. It is an example of a stock that has sustained a track record of largely stable growth despite the price volatility of palm oil. 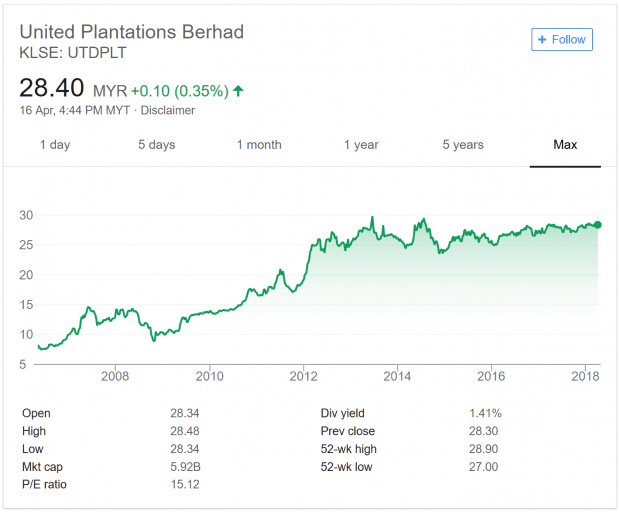 As I write, United Plantations is worth RM5.9 billion in market capitalization and is among the top 10 largest stocks in the plantation sector listed on Bursa Malaysia. In this article, I’ll bring an account of United Plantations’ achievements thus far, the risks it faces, and discuss its outlook for the immediate future. Here are 10 things you need to know about United Plantations before you invest. 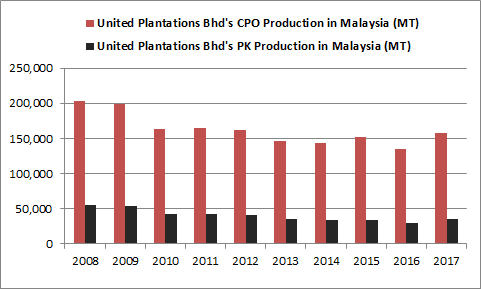 2. On 9 June 2006, United Plantations Bhd acquired a 95% interest in PT Surya Sawit Sejati, marking its entry into Indonesia. Since then, it has expanded moderately by increasing its estate from 1,500 hectares in 2006 to 9,035 hectares in 2017. Productions from these plantations have been rising as they mature. In 2017, its estates in Indonesia produced a total of 47,459 MT of crude palm oil and 8,387 MT of palm kernel, up from 5,435 MT and 830 MT in 2010 respectively. The increase in production from its estates in Indonesia have offset its decline in production from Malaysia. Combined, United Plantations has produced an average of 191,289 MT and 45,217 MT of crude palm oil and palm kernel annually over the last 10 years. 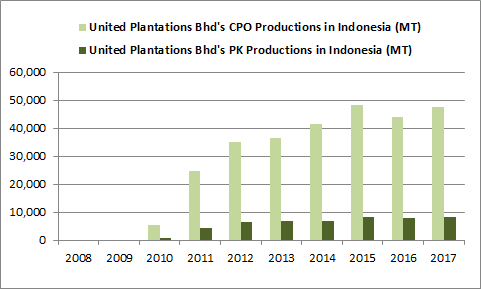 3. United Plantations has achieved a CAGR of 8.14% in group revenue over the last 10 years, from RM674.19 million in 2007 to RM1.47 billion in 2017. This is directly contributed by the continuous rise in production of palm products from its estates in Indonesia and a slight growth in average sales price of its palm products which offset its production decline from its estates in Malaysia. 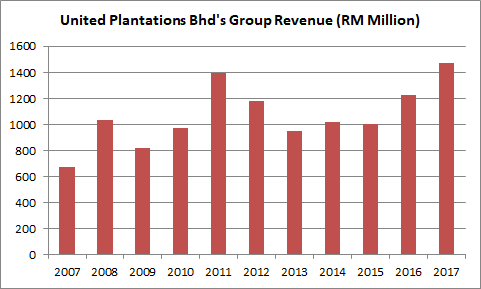 4. United Plantations has achieved a CAGR of 8.09% in shareholders’ earnings over the last 10 years, from RM179.4 million in 2007 to RM390.5 million in 2017. This is mainly attributable to improved margins arising from the production of palm kernel in both Malaysia and Indonesia as the average sales price of palm kernel has increased more than its cost of production during the period. Overall, United Plantations has a 10-year return on equity average of 15.48%. (Here’s why I like companies with consistently high return on equity.) 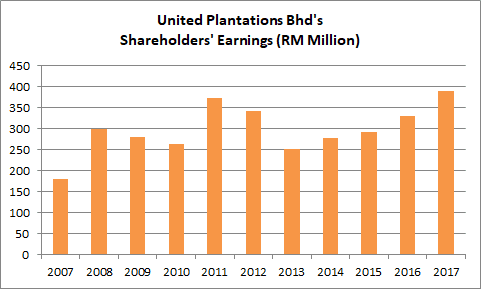 5. United Plantations has generated RM3.53 billion in cash flows from operations over the last 10 years. Out of which, it has spent:

This means the company is a cash-producing business and doesn’t need to continually raise equity or borrowings to expand its business or reward its shareholders with dividends. 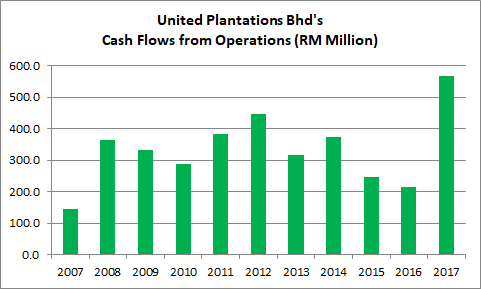 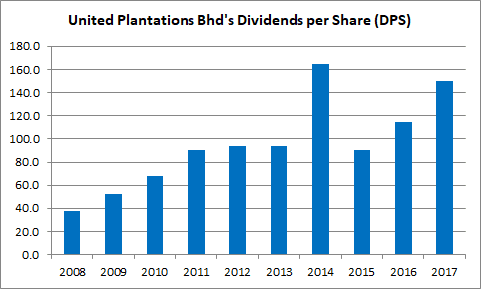 7. The price of palm oil can be volatile and is subjected to multiple factors such as the price of crude oil, prices of alternative oils & fats, weather conditions, demand from major importers of palm products such as India, China and the European Union.

8, The palm oil industry is also labour-intensive. It faces a shortage in field workers, harvesters and collectors. United Plantations is looking to recruit more labourers from Bangladesh and India to reduce its dependency on Indonesian workers. In addition, it faces an ever-present risk of hikes in labour costs. Thus, the company aims to improve productivity via efficient management of its labour force.

9. In 2017, United Plantations spent a total of RM135.8 million in capital expenditure, mainly for the construction of a palm oil mill and additional capital investments in the refinery division.  It also spent RM39.8 million in plantation development expenditures to replant as much as 1,979 hectares of oil palm and coconut trees in Malaysia and 478 hectares of new plantings under the plasma scheme in Indonesia. These investments should help boost the company’s growth in the near-term.

10. In early 2018, United Plantations received SK HGU (Hak Guna Usaha) for 6,004 hectares of land for the development of palm oil estates in Indonesia. It is a step forward towards the final HGU of the land above which the company expects to receive before the end of March 2018.

In summary, United Plantations has built a track record of delivering growth in sales, earnings, and dividend payments to its shareholders over the last 10 years. It has proven to be resilient when palm oil prices are high or low. It has resulted in stable demand for its shares, which explains why its stock price has grown steadily over the last 10 years.

As at 31 December 2017, the company remains cash-rich with RM851.59 million in cash, bank deposits, and short-term funds. The bank deposits and short-term funds have weighted average interest rates of 3.94% and 3.26% respectively. The company has zero long-term borrowings and has a current ratio of 7.77. This enables United Plantations to invest for future growth without the need to borrow and maintain its position as one of the top 10 largest palm oil companies in Malaysia.