YTL Hospitality REIT (YTL REIT) is presently the only REIT listed in Malaysia that invests specifically in hospitality assets. As at 30 June 2018, it owns a portfolio of 14 properties valued at RM4.31 billion.

In this article, I’ll bring a detailed account of YTL REIT’s developments since its listing, its financial performance, and its plans for future growth.

Here are 12 things you need to know about YTL REIT before you invest:

1. YTL REIT was originally listed as Starhill REIT (separate from Starhill Global REIT which is listed on the SGX) on 16 December 2005. At that time, it owned three properties in its seed portfolio: the JW Marriott Hotel Kuala Lumpur, Starhill Gallery, and parcels in Lot 10 Shopping Centre in Kuala Lumpur. In 2007, YTL REIT added part of the Ritz-Carlton Kuala Lumpur Suite Wing to its portfolio, raising its number of properties to four.

2. In 2009, YTL decided to reshuffle its portfolios where YTL REIT became a pure-play hospitality REIT while Starhill Global REIT was established as a retail REIT. Thus, YTL REIT sold Starhill Gallery and Lot 10 Shopping Centre to Starhill Global REIT. With the sale proceeds, YTL REIT acquired a total of eight hotels in Malaysia and a hotel in Japan in 2011. Thereafter, YTL REIT acquired three hotels in Australia in 2012. With that, YTL REIT completed its portfolio reshuffling exercise and has been a pure-play hospitality REIT since.

4. In May 2017, YTL REIT acquired the Hotel Majestic Kuala Lumpur for RM380 million. The property is a five-star, 300-room hotel situated at Jalan Sultan Hishamuddin, Kuala Lumpur. The property is presently leased to YTL Majestic Hotel Sdn Bhd under a fixed lease agreement for a term of 15 years with an option for renewal for another 15 years. Annual rental income is RM17.6 million and the property started contributing to YTL’s revenue in in Q2 2018, explaining the spike in revenue and net property income (NPI) for YTL REIT’s malaysian portfolio for the year. 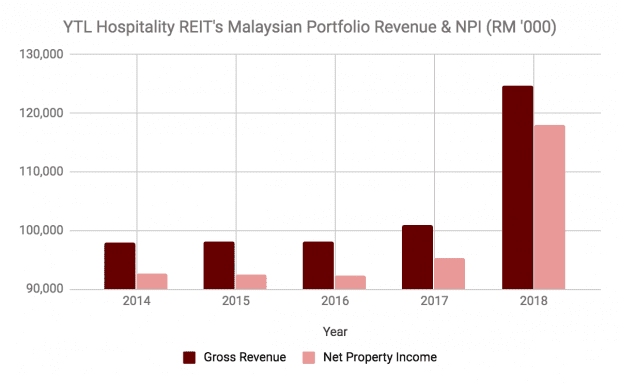 5. Hilton Niseko Village is a 16-storey, 506-room hotel located in Hokkaido, Japan. Presently, the hotel is leased to Niseko Village K.K. under a fixed lease agreement at RM15-16 million annually for a term of 15 years. Thus, the property has contributed stable income to YTL REIT over the last five years. 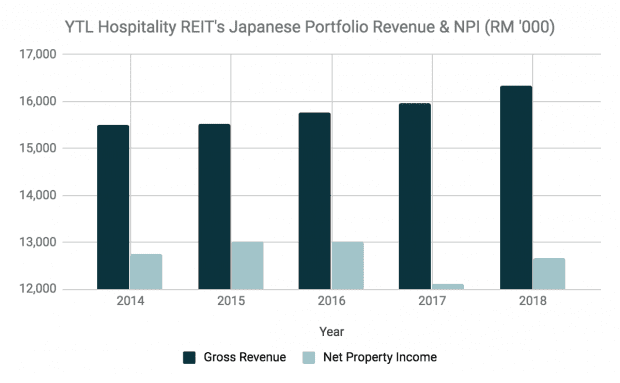 6. Since 2013, YTL REIT has owned three hotels in Australia: Sydney Harbour Marriott, Brisbane Marriott, and Melbourne Marriott. These hotels contribute variable income to YTL REIT — the amount of income derived is based on their performance unlike YTL’s fixed lease agreements with its properties in Malaysia and Japan. Both Sydney Harbour Marriott and Melbourne Marriott have achieved stable and high occupancy rates of 85-90% over the past five years. Brisbane Marriott has improved its occupancy rate from 75.0% in 2014 to 85.1% in 2018. As such, the three hotels have contributed steady growth in both revenue and profit over the last five years. 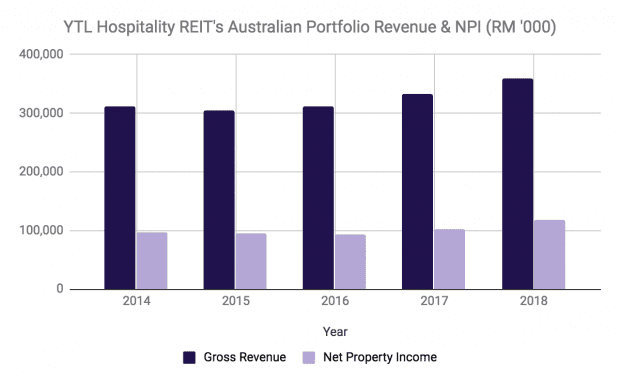 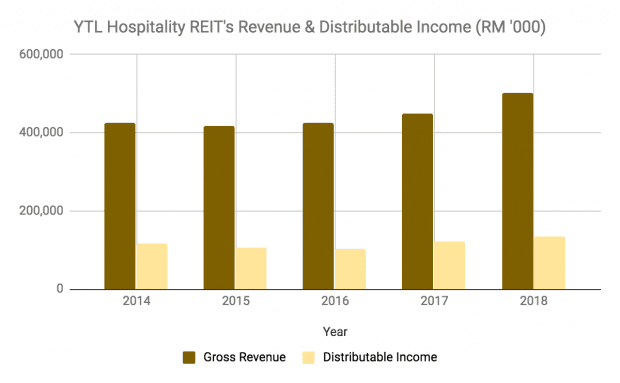 9. YTL REIT will continue to derive income from fixed lease agreements from its assets in Malaysia and Japan for a good period of time as their contract periods are set for 15 years from their commencement. The leases also come with options for renewal for another 15 years period upon expiry. I’ve compiled a list of properties under these agreements, their rental rates, and expiry date below:

10. On 14 August 2018, YTL REIT entered into a conditional agreement to purchase Green Leaf Niseko Village for ‎¥6 billion (or RM222.5 million) from Niseko Village K.K., an indirect wholly-owned subsidiary of YTL REIT’s sponsor, YTL Corporation Bhd. Upon completion of this acquisition, the property will be leased back to Niseko Village K.K. for a period of 30 years at a fixed step-up rent as shown below, with an option for renewal for another 30 years. This acquisition will add to YTL REIT’s income stability moving forward.

Currency conversion based on current exchange rate of JPY100/RM3.7078. 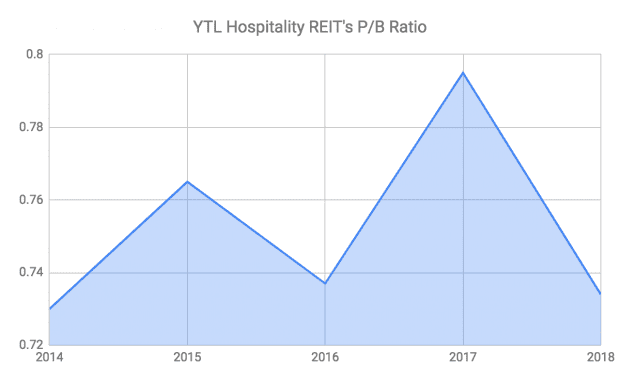 12. Dividend yield – MITs DPU for financial year 2018 is 7.8683 sen. Based on MIT’s share price of RM1.25 its gross dividend yield is 6.0% — which is near its lowest historical yield of 6.29%. As a retail investor, you also incur a 10% withholding tax on distributions from Malaysian REITs. Thus, your net dividend yield from YTL REIT would be 5.67% after withholding tax. 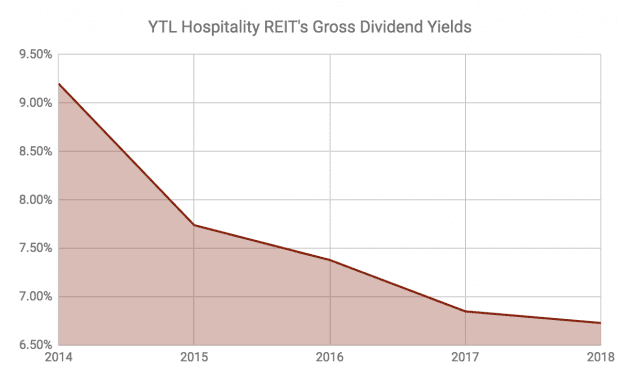 Moving forward, YTL REIT is likely to continue generating stable long-term income from its fixed lease agreements from 11 properties which comprised 52.5% of NPI in 2018. This proportion will increase after the proposed acquisition of Green Leaf Niseko Village.

Compared to other Malaysian REITs, YTL REIT inherently carries a greater amount of foreign currency risk as it derives 47.5% of its NPI from three hotels in Australia, and has 57.2% of its total borrowings in denominated in Australian dollars. A stronger Australian dollar would negatively impact YTL REIT’s revenues, NPI, and interest costs.